Music Makes the People Come Together

A guide to attending a music festival.

Cutting the Ties That Bind 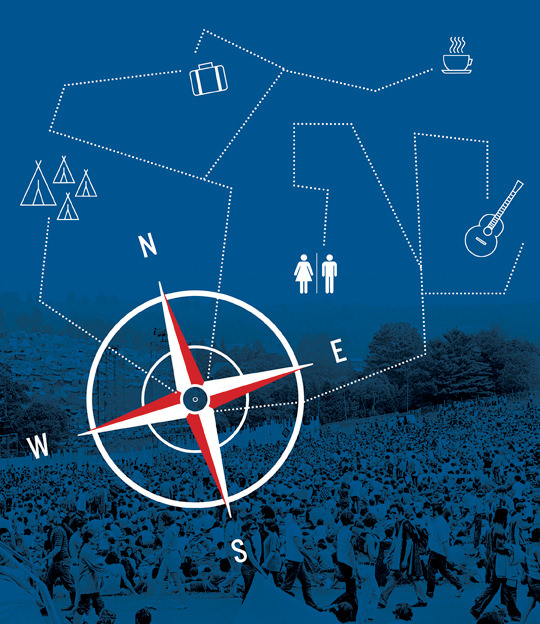 Outdoor music festivals are simultaneously my favorite and my least favorite thing in the world. On one hand, being in a huge unruly crowd during the hottest months of the year sounds like a pretty accurate description of Hell. On the other hand, it’s a great way to see a ton of bands for really cheap! I usually can’t afford to see the bigger bands when they tour, but I can rationalize investing my vacation savings or birthday money if a few good acts are playing.

Over the years, I’ve been to a few festivals around Canada, like my hometown Ottawa Bluesfest and Montreal’s Osheaga. I’ve learned a few valuable tips. (Sadly, my expertise has yet to extend to overnight/camping festivals, which generally involve more preparation.) I also consulted some fest-savvy friends to compile a few things that I think you should know.

Most festivals require a lot of work, which needs to be done in a short period of time, and thus they depend on volunteers. Depending on how old you are, jobs tend to range from working at refreshment stands to picking up trash. It doesn’t sound glamorous, but volunteers usually get to attend the rest of the event for free. Check the festival in question’s website for more information.

Sometimes long-term volunteers get even better perks. A friend of mine volunteered at Bluesfest for several years and eventually gained enough seniority to work backstage. I asked if she had any good stories. “I met Snoop Dogg,” she said. And? “Snoop Dogg was pretty cool.” There you have it.

You can also look into acquiring a press pass. If your school has a paper or radio station, or if you have a blog, contact the press person through the band’s or the festival’s website and ask about getting in for free in exchange for covering the event. You can also look for music websites and publications in your area and offer to write for them—smaller sites might not be able to pay, but they probably will have access to festival passes.

I have ended friendships because we both wanted to see different shows at the same time! OK, it never went that far. But I have gotten into heated debates with friends about the merits of skipping Metric for Devo. Figure out the schedule ahead of time: how far apart are the stages, what times are your favorite bands playing, and do they conflict with the acts your friends want to see? Are you willing to compromise or split up and meet again later? These are important questions to ask beforehand.

It’s good to go to a festival with someone for safety reasons (well, and for fun). Decide on a meeting spot with your friends when you arrive, as in, “If we get split up, meet back at the information tent near the entrance after the final act.” This way you won’t have to worry about wandering through crowds in the dark trying to find each other while deciphering cryptic text messages: “Where r u?” “By tree nar stage text 2 kidd blue shrt.” (Also, service can be an issue in packed areas where everyone is using their cellphones.) And keep an eye out for one another. Stay aware of your surroundings, and trust your instincts.

3. Be careful in the crowd.

Sadly, there’s no foolproof way to avoid creeps. If you feel like somebody is using the crowd as an excuse to touch or take advantage of you, move. If there’s no loud music playing, yell “HEY WHY ARE YOU TOUCHING MY BUTT” at the offender, the move. If you can’t or you don’t want to move (because this is YOUR spot that you’ve been saving for hours, and you have every right to be there), stand your ground and resist. My friends’ tactics included descriptions like “flailing your arms like an octopus” or “standing with your elbows out as if starting the chicken dance.” This allows you to protect your body and push back if you need to, which can also help you navigate out of a crowd. Make a fuss. Loudly tell the asshole to “Back off!” so people take notice of them.

Of course, if you hate crowds in general, or if the crowd gets rowdy and you’re worried about being smooshed, just push your way out and hang out near the sides instead of the center. Should there be any persistent issue, either with another concert-goer or with crowd control, seek the help of the security team along the barricades or on-site personnel.

A few years ago, my absolute favorite band, the Pixies, was headlining a festival. I wanted to be as close to the stage as possible, so I got there at 11 AM even though they weren’t set to take the stage until NINE that night. (My friends and I covered each other for bathroom and food breaks—again, the importance of going with like-minded people.) I was right by the speakers for the half-dozen bands who played beforehand, and the loud music they blasted in between sets. For several days after the show, my ears kept ringing, and I could barely hear a thing.

The moral of the story: hearing loss is no joke! If you are planning to stay near the speakers, invest in earplugs. Don’t worry about looking like a dork, most experienced concert-goers wear them (so there). You can get earplugs at the drugstore for, like, two bucks. Some venues sell them at the bar or at the merch booths. And the music will still be loud enough that you can hear.

Remember: you are going to be outside, and these events take place rain or shine. Check the weather before you go, and keep in mind that you’ll be out late. Throw a small bottle of sunscreen, sunglasses, a rain poncho, and a light sweater in your bag, and you’ve got all your bases covered. Unless you plan on sitting far away from the stage all day, avoid big, bulky baskets or purses. I personally prefer bags that zip, like backpacks or zippered totes, so you don’t have to worry about things falling out in the crowd.

For some bands, you’re going to want to be right by the stage. For others, you might just want to mellow out and enjoy the music. When you need to take a break from the crowds, there is nothing like finding a shady spot far away from everything else and having a li’l picnic while the band plays in the background. (OK, full disclosure: I’ve never actually brought a blanket, but I always envied the people who did.)

It’s also wise to carry some cash. Even if there is an ATM where you’re going to (and don’t count on it), you can expect long lines and huge fees. If you can, bring between $40 and $60 for concession stands, merch booths, and emergency cab fare, even if you don’t plan on spending anything.

Food at festivals tends to be ridiculously overpriced, and you probably don’t want to be ingesting corn dogs and chili fries in the hot sun all day. You will be a hero among your friends if you bring sandwiches and granola bars. You may not be able to bring liquids into the venue (check the website), but bring an empty water bottle and fill it up on the inside.

So here’s another anecdote: a few years ago, I was seeing the Flaming Lips on the hottest day of the summer. I didn’t bring any food with me and had less money than I realized to buy anything. I tried to beat the system by getting a small order of fries and then smothering it with loads of free ketchup from the condiment stand. Didn’t work, that was just gross. I overheated and passed out right in the middle of the action, and my sister had to drag me out through the crowds while I was wearing a short skirt and flip-flops. We had to go to the paramedic’s booth, which at first seemed great, because they had a great view of the stage, but then they blocked my view to take my blood pressure as I loopily tried to sing along with “Yoshimi Battles the Pink Robots Pt. 2.” Concerned, my sister called our brother to pick us up, and once she realized I was actually OK, she never let me forget the fact that I made her miss the end of the set.

WHAT I’M GETTING AT: make sure you eat right and stay hydrated. You’re going to be outside in warm weather for long periods of time, jammed among sweaty bodies and probably breathing in cigarette (and other) smoke. Do you really want to spend the night puking in the bushes?

Keep in mind, if you are planning to ingest other substances, which we don’t recommend, you might react differently than you expect because you are in an unfamiliar place, possibly one that’s hot and crowded. I’ve seen folks miss their favorite acts because they were inebriated or otherwise indisposed. I’ve also seen messed-up people make it to certain acts only to pelt Stephen Malkmus in the head with beer. (Please don’t be that person.) Anyway, know the risks, find the chillout tent, and stay safe.

This is crucial: figure out the bathroom situation as soon as you get there. This is probably the most valuable advice I can give you. There is nothing worse than realizing you really need to pee five minutes before your favorite band is about to take the stage only to wander around a giant venue only to get in line behind 50 people. Look for the bathrooms in the least crowded areas of the venue (like near the smaller stages). Those tend to be significantly cleaner. And consider bringing a travel pack of tissues—the toilet paper goes fast.

If the music fest happens to be in another city, make sure you know your travel plans (bus schedules, fares, and whatnot) beforehand. This is good advice for every time you travel, but especially when you leave a big event. Thousands of people will be heading for the exits at the same time, so you want to know where you’re going.

8. …but not that organized.

Part of the fun of music festivals is finding out about new acts that you wouldn’t have otherwise listened to, or meeting people with similar tastes. Go explore! Have an adventure! I mean, obviously you should stay safe (if some random guy tells you he can introduce you to the band if you go with him in his van, DO NOT GO). But as Ms. Frizzle from The Magic School Bus used to say: take chances, make mistakes, and get messy. ♦