Literally the Best Thing Ever: Undeclared

If comedians were painters, and this series was a massive painting that they had collaborated on early in their careers, no one could afford to buy it.

The Choice Is Yours 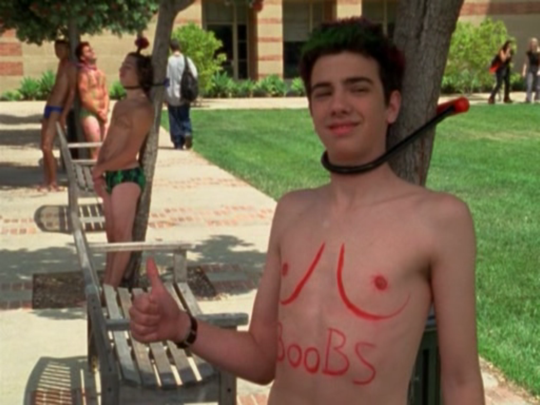 When I was 19, I wrote Judd Apatow a love letter of sorts. It wasn’t romantic, just an expression of creepy fandom that basically boiled down to “Oh my God! How can you be this awesome?” and concluded with me asking for a job (because I’m sure that he finds all of his collaborators via fan mail). Fortunately, I never sent the soul-baring missive, and it’s mercifully lost to history, forever trapped in a laptop that contracted some kind of computer venereal disease.

I’d felt compelled to write to Apatow after re-watching a VHS recording (this was eons ago, obviously) of an episode of his unjustly canceled series Undeclared. The episode, called “Eric Visits Again,” features a marvelously inept brawl between Jason Segel and Jay Baruchel and a Razor scooter chase scene set to the tune of the Mortal Kombat theme song. While I’d certainly been crazy about sitcoms before (I’ll save the weird tale of my obsession with scribbling Everybody Loves Raymond on my arms in Magic Marker for another time), I felt a profound personal connection with the writing and characters on Undeclared, strong enough to inspire me to declare my adoration for Apatow in a couple of embarrassingly heartfelt paragraphs.

Airing for one single, amazing season from 2001 to 2002, the show followed six college freshmen reveling in their newfound independence. In the broader sense, the show was about straddling that line between adulthood and childhood, that time when you have grown-up relationships and responsibilities, yet you still find yourself playing a game of “Truth or Dare.” Even the show’s title is a reference to a certain ambivalence—an “undeclared” college student hasn’t yet settled on a major course of study.

Steven Karp (Baruchel) is the geeky, naïve heart of the show. His dorm crew is made up of Lloyd (Charlie Hunnam), an English lothario, always quick to offer up questionable romantic advice such as “[Every girl] could be the one, and you don’t know until you sleep with them, all of them”; Marshall (Timm Sharp), a scruffy goofball who is unlucky in love; Ron, a bespectacled wiseass (played by Seth Rogen, who also wrote for the show); Lizzie (Carla Gallo), who captures Steven’s heart right away with her sweet, girl-next-dorm charm; and Rachel (Monica Keena), the hot one. They start out as strangers, then bond instantly in a way that, yes, is convenient for a TV show trying to establish a winning premise, but also feels organic and true to how friendships are formed in college dormitories during freshman year. Within the first few weeks of school, I’d already formed an intense, symbiotic relationship with a small group of kids who lived in my dorm—we ate every meal together, walked through campus in a pack, and regularly burned mix CDs for each other. In those first few months of terrifying novelty, superficial differences were trumped by the fact that we were all sharing the daunting but insanely exciting experience of being on our own for the first time. 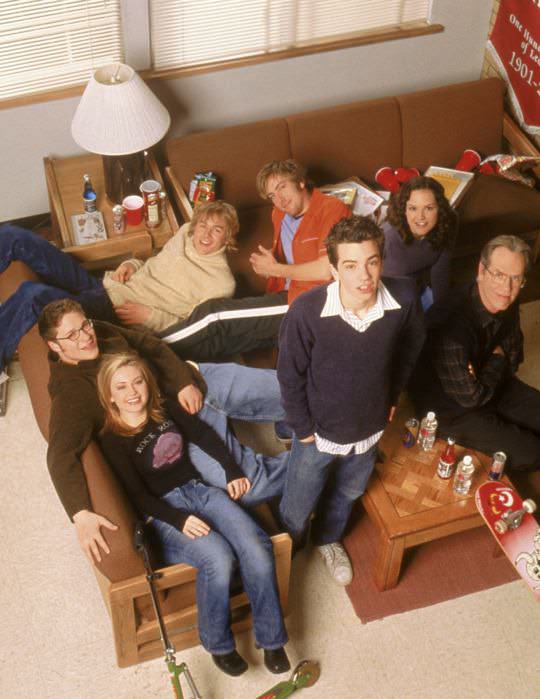 Produced by the same creative team as Freaks and Geeks, Undeclared served as a kind of reunion, offering a balm for the inevitable depression, heartburn, and indigestion that sets in after you realize that the high school-set series about the Weir siblings and their misfit pals is over forever (Pepto-Bismol might help, too). Rogen’s Ron is just as endearingly awkward and sensitive as Freaks’ Ken. Jason Segel, in what is arguably his best role to date, plays Lizzie’s overbearing, saccharine boyfriend Eric, who is a lot like Lindsay Weir’s smothering, “Lady ‘L’”-singing boyfriend Nick Andopolis. If that isn’t enough, Martin Starr, Busy Philipps, Natasha Melnick, and Samm Levine all guest starred, too. 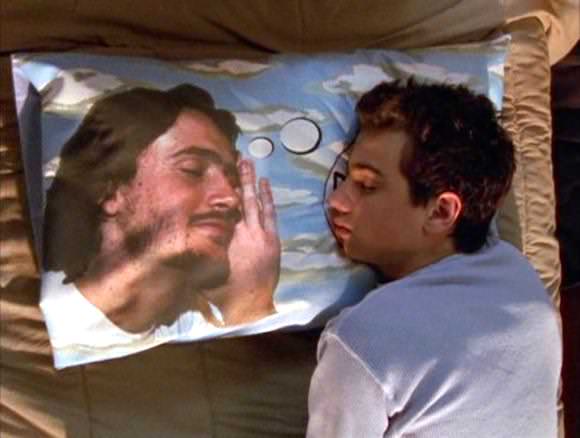 Freaks was an honest and relatable portrayal of high school, and that dedication to authenticity continued with Undeclared, the most truthful representation of college life that I’ve ever come across. Even though the familiar moments are hilariously heightened, the episodes always ring true. Watching it always reminds me how we’re all connected through the common absurdities of everyday life.

I was a freshman in college when Undeclared originally aired, and while I’m positive that I’d still love this show if that hadn’t been the case, it definitely intensified my enjoyment. Yes, it explores stereotypical college subject matter, such as sex and booze—but the show focuses on the awkward, hilarious details that most depictions of college gloss over, the sort of mundane, unglamorous, but definitely integral parts of the experience. When I was in high school, no one told me that when I went away to college, someone would set up a table in the middle of the campus and try to get me to fill out a credit card application, or that my natural response to this would be “Why yes, I think I’ll take one of those right now!” Thank god my mother monitored my credit card use, otherwise I’m pretty sure that I would have ended up like Steven, who uses his new card to buy term papers from a speed freak played by guest star Will Ferrell. I also didn’t realize how independence can lead to an oddly laissez-faire attitude about nutrition. In an episode called “Jobs, Jobs, Jobs,” the boys eat from huge pans of discarded dining hall food. It’s not that much nuttier than when I ate some pizza that had been sitting in an unrefrigerated box in the corner of my room for several days.

A big part of my love for the show comes from the connection I feel with Steven. Both of us were unworldly and nerdy and had never been remotely close to having a romantic relationship in high school. In “The Day After,” Steven feels his relationship with Lizzie is progressing when, after a sleepover, she calls him “baby,” and he gleefully returns the endearment. Afterward, he says to Lloyd, “Did you just see that? I just got to call her ‘baby.’ This time, to her face!” The humor of that line is so simple and his enthusiasm is so adorable that it kills me. And most important, before I went to college, the only person I ever got to call “baby” was an actual baby, so the joke really hits home.

I’m going to go out on a limb and say that Undeclared is a close enough representation of the college experience that you could probably just watch the show instead of actually taking out loans, packing your bags, and going off to school. With Undeclared you get to live the highlights—the fun and stress of campus-sponsored events, the experimentation, that thing where you don’t know where you stand with a person that you just hooked up with—without taking exams, writing essays, or getting mononucleosis (an epidemic in my freshman dorm). And there’s 200% more Amy Poehler on Undeclared than there would be at any university that you might attend—she played a boy-crazy resident advisor on two episodes.

I’ve long since graduated from college, but I still find myself marveling at how this show manages to be both eternally relevant and culturally specific. Unlike Freaks and Geeks, which took place in the distant 1980s, Undeclared was contemporary. Just as the Chauvet cave paintings tell us about how dope horses and bison were to people of the Paleolithic era, Undeclared will educate future generations about pop culture at the start of the 21st century. In the pilot, Steven revamps his uninspired, high school look by asking his barber to give him the “Matthew Perry,” the heavily gelled hairdo preferred by 40% of the male population back then. The music video for the Adonis-bodied D’Angelo’s “Untitled (How Does it Feel),” required viewing at the time, is featured prominently in another episode in which Steven is banished to the common room while his roommate, Lloyd, has sex. He ends up watching D’Angelo erotically flex his well-oiled abs with a crowd of fellow “sexiles.” 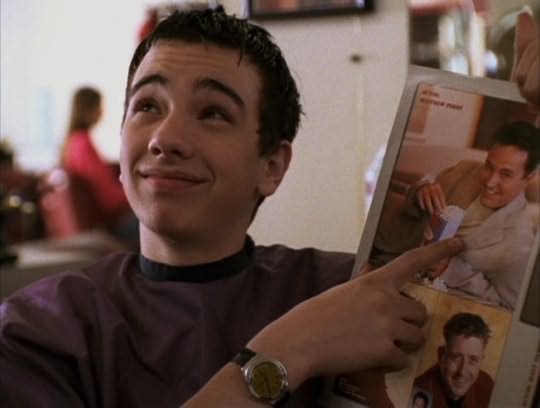 Undeclared also provides an early look at several of today’s funniest and most prolific comedians. In 2001, Seth Rogen, Jason Segel, Amy Poehler, and Will Ferrell weren’t the fabulously successful, mega-famous, award-winning, go-to funny people that they are today. To have one show host this much talent seems like a precious, rare thing. If comedians were painters and Undeclared was a massive painting that they had collaborated on early in their careers, no one could afford to buy it (well, except for Will Ferrell). Lucky for us, Undeclared is available on DVD for a reasonable price. ♦