He was on fire. So was his leather jacket.

I turned 10 years old in 1990, and, as previous dispatches for Rookie indicate, I spent my adolescence as a budding fashion plate, even though I was basically shaped like a tall fire hydrant. One of my favorite books at the time was Arthur Elgort’s Models Manual, which was little more than an enormous pile of photographs of beautiful women. There was something about the models that fascinated me. It wasn’t just that they were ethereal and lovely; it was also that they seemed so in control of their own identities. The term “rock star” gets thrown around a lot, and most of the time it seems really cheesy, but I think it actually applies in this case. The models I loved were like rock stars, and the rock stars I loved were like models, consciously manipulating their image. Like, for example, George Michael.

George Michael was the king of complicated identity politics. We now know that he spent the early ’90s in the closet, struggling to reconcile his public vs. his private life. But back then, I had no idea. Like most kids of my generation, I knew him first as one half of the group Wham!, who were famous for the songs “Careless Whisper” and “Wake Me Up Before You Go-Go,” which are both fairly ridiculous, and then as the signer of “Faith,” which remains one of the greatest songs of all time, if only for that chug-a-chug-chug guitar sound and its sing-a-long-ability.

George’s five o’clock shadow was legendary, as was his butt, which he liked to shake. 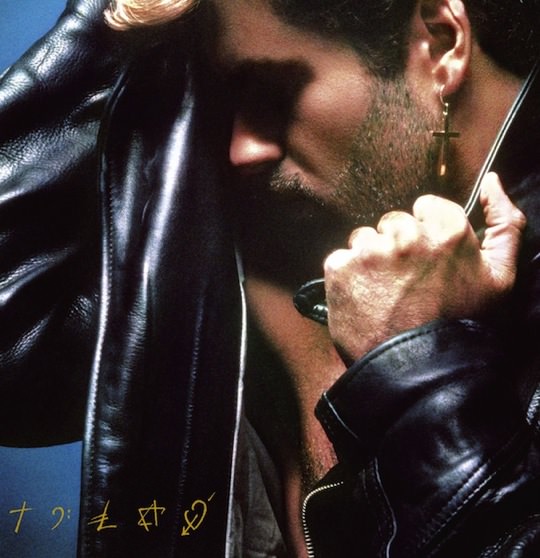 In 1990, Ellen DeGeneres was still in the closet and Neil Patrick Harris was still Doogie Howser, M.D. George Michael’s career was built on being a sex symbol—an object for women to drool over. His fans went crazy for his tight blue jeans, his dangling earrings, his aviator sunglasses, and his pompadour. I know, in retrospect, it might seem obvious that he was gay. Now when you listen to “Freedom! ’90” it’s difficult not to hear it as a coming-out song, though George never directly says what needs to change.

Watching the video and listening to the song now makes me think of Against Me!’s singer, formerly known as Tom Gabel, who has just come out as a transgendered woman. I’ve seen Against Me! live many times, and my ear always held on to this line from their song “The Ocean”: “And if I could have chosen, I would have been born a woman / My mother once told me she would have named me Laura.” Now Tom is named Laura, and is taking hormones to further her transition, which strikes me as one of the bravest things I’ve ever heard. George wasn’t quite ready to call Rolling Stone and bare his soul, however.

So what did he do to out himself instead, if only in an oblique fashion? In the video for “Freedom,” he sets fire to his famous leather jacket and blows up the jukebox next to which he has been shaking his ass. And then, most significantly, he takes himself—already playing at being a rock star—out of the equation, and replaces his face with those of the most famous models of the day: Linda Evangelista, Naomi Campbell, Christy Turlington, Cindy Crawford, Tatjana Patitz. They mouth the words to the song: Cindy, naked in a bathtub; Christy, wrapped in a sheet; Naomi, dancing around in combat boots and hot pants; Linda, sitting on the floor in what looks like an oversized J. Crew sweater; Tatjana, looking sad and smoking a cigarette. (There are male models, too, but I’m sorry, I don’t care about them. They are all handsome guys who look a little bit like Timmy Riggins from Friday Night Lights. They don’t matter here.)

The female models writhe around in dark rooms, their famous angles and curves acting as proxies for George’s. The effect, at least on 10-year-old me, was startling, because it brought up the question—what had George himself been, if not a model? Was he not also wearing a costume that didn’t belong to him, and posing for the camera? For the first time, a video on MTV was asking me not only to sing along and dance in my living room, but also to think about the ways in which musicians were being portrayed. I suppose one could see the video as an act of cowardice, hiring these professionally good-looking men and women to act as mouthpieces for George’s confession, but I saw it as the opposite: George Michael was telling me, the young viewer at home, to not always trust the images I saw on MTV, that people were not always what they seemed, and that sometimes even the most glamorous and sexy people on earth are not displaying what’s most important to them. “Freedom” resonated with me then, and continues to resonate with me now, because it gives me a window into the hidden, true, complicated life of someone who had previously been inaccessible and seemingly perfect. After that, MTV might as well have come with a warning like one of a rearview mirror: some things are not as they appear on-screen.

And then, of course, there’s the song itself. From my description above, it sounds like a dirge, too serious to be any fun. Instead, the song is buoyant, and pleading, and strong. The chorus is triumphant, and George is laying it all out there for the listener: the problems he’s had being the person everyone wanted him to be, and his desire to let all of that go. It’s a powerful thing, to take charge of your outsides as well as your insides. Ask any girl who has bleached her hair platinum blond, or gotten an enormous tattoo, or decided to wear a really ridiculous outfit, just because. There is real beauty in bravery. You can’t put a jacket back on once you’ve set it on fire. ♦