Literally the Best Thing Ever: Christian the Lion 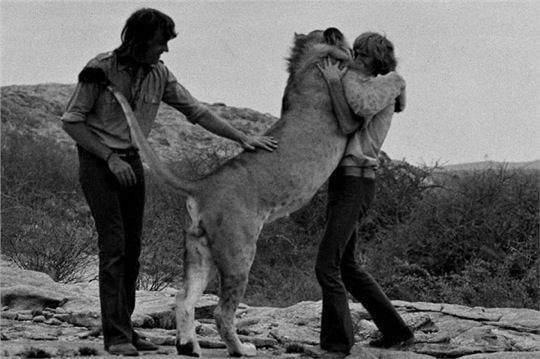 Can you imagine walking into a furniture store and seeing, among the living room sets and wardrobes and armchairs, a fuzzy little lion cub stretched out on the floor for you to pet? I know it sounds like the beginning of a really awesome dream, but this was a real experience for those who shopped at Sophisticat on King’s Road in London circa 1970. At the time the area was the absolute height of British cool. Its most famous resident was Mick Jagger. However, even cool cat Mick (SEE WHAT I DID THERE) couldn’t compete with his neighbor, Christian, the friendly baby lion who liked to give human-style hugs. Maybe you’ve already cried over his lovability and wished for a lion snuggle of your own while refreshing the video on YouTube over and over again, but if not, I’m warning you now—break out the Kleenex, because this story is like an Elliott Smith album multiplied by freshly-cut onions in terms of tear-jerkery, except you’ll be weeping tears of pure joy. 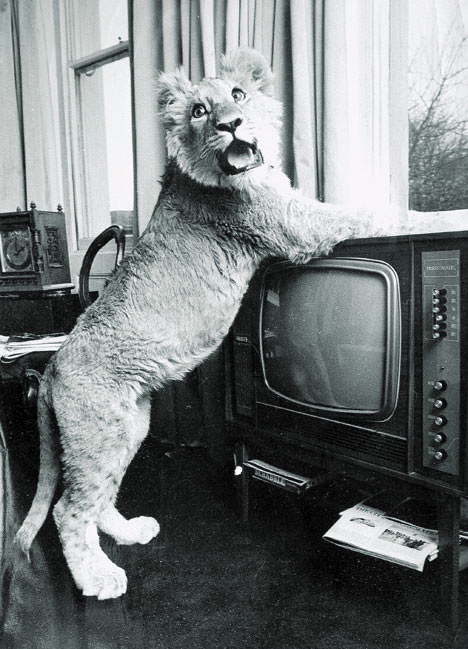 Anyway, you’re probably wondering how Christian’s living scenario came to be. If anything even close to an animal as exotic as a lion showed up in a boutique these days, you KNOW it would be a huge scandal, and rightfully so. However, in the late ’60s, before the passage of global laws protecting endangered species, an English department store, Harrods, sold all kinds of exotic “pets” to wealthy people, including camels, baby elephants (the Prince of Albania bought one for Ronald Reagan; Nancy called him “GOP”), and Christian, who had been acquired from a defunct zoo in a British resort town. Anyone with enough cash up front could buy an undomesticated wild animal, regardless of their ability to properly care for it. One afternoon in 1969, a man named John Rendall went to check out the store and was appalled to discover a beautiful lion cub confined to a small cage. Naturally, he freaked out and bought Christian for 250 pounds, which would be something like $4,000 today. Wouldn’t you do the same if you saw a cuddly cub in that sad situation? I know I would, even if my parents said no. “I mean, I promise to walk him!”

Nowadays, even corner pet stores and shelters will give you very detailed instructions for how to care for your dog or cat or guinea pig, but Harrods sent Rendall off with nothing more than some diet information. For a LION. In the middle of LONDON. 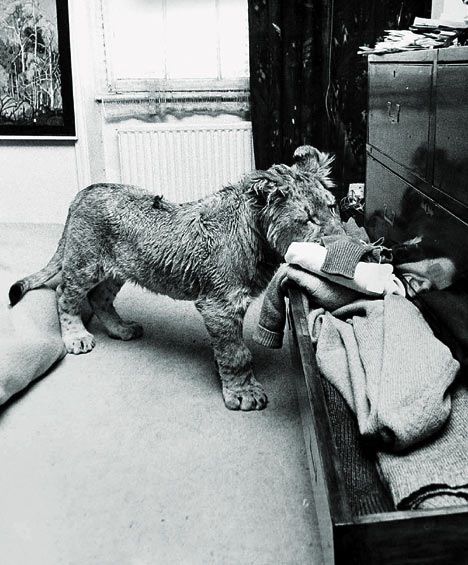 Despite their lack of experience with large African wildcats, Rendall and three friends made sure that Christian had everything he needed to be a happy little cub. He had his own large living quarters in the basement of Sophisticat, which was owned by Rendall, and was allowed to play outdoors in a secluded graveyard nearby. He was also fed quite well—Rendall provided four meals and supplementary vitamins every day. In return, the lion showed plenty of affection to his owners and the store’s customers, who considered him a friendly local celebrity. Christian was welcomed into the area’s restaurants and clubs, arriving in his owner’s Bentley like a total boss. Christian loved to be in public, and would show off by getting on his back legs to hug Rendall or other people who were warm to him. Christian was so famous for imitating human behavior that the documentary about him is subtitled, The Lion Who Thought He Was People. 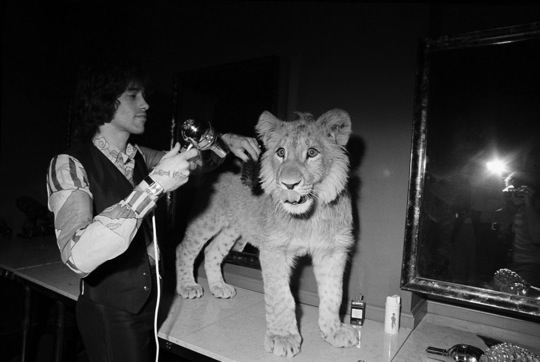 Image via Listen and Read

However, this mutual admiration between man and beast wasn’t enough to sustain Christian’s life on King’s Road—the thing about lions is that, unlike your average housecat, they eventually grow into terrifyingly enormous predators. After a year, he was almost two hundred pounds and looked less like a kitten than a man-eater, though he retained his sweetheart demeanor. His owners realized that Christian needed a more suitable home. It was time for him to leave the furniture store and go somewhere where he could live the wild life that every good lion deserves (the “bad” ones deserve it too).

Luckily, right around the time that Christian was outgrowing the store, a solution presented itself in the form of Bill Travers and Virginia McKenna. The two had recently acted in the movie Born Free, which coincidentally told the story of conservationists George and Joy Adamson’s attempts to return a domesticated lion to the wild. They suggested Rendall enlist the help of the real-life Adamsons, who were now living in Africa. So in 1971, Rendall and his friend Anthony “Ace” Bourke, who had helped him raise Christian, flew with their furry pal to Kenya, where they met the Adamsons and planned to help Christian adapt to his new surroundings.

Wild lions have a strict hierarchy in their prides, which are like tight-knit extended families. A typical pride will have three to four female lions, one or two males, and their cubs, and it’s incredibly difficult to introduce a new lion to a pre-existing pride without inflaming tensions; it would be like the new girl plopping down at the lunch table of your high school’s snobbiest clique. It was going to take a lot of work to ensure Christian’s well-being as he transitioned from a pampered playboy into the kind of beast that roamed the ancestral plains.

George Adamson, Rendall, and Bourke planned to release Christian along with Boy, the lion who had starred in Born Free, so that the two could acclimate together and begin a new pride of their own. The lions were brought to a park, where they were housed in adjoining pens, separated by a wire fence. It was the first time Christian had met another lion since birth, and his lack of knowledge about the delicate social order of lions would probably have gotten him killed otherwise. Young male lions like Christian are supposed to observe a biological subservience to lions that are older, like Boy. The younger lion must wait to be approached by the older lion if he doesn’t want to get mauled beyond belief. (I imagine it would be like the time I brought a sketchy new boyfriend to my high school graduation party and my dad basically threatened to disappear him, but with just a little more blood.) However, Christian was used to the world fawning over his very existence and had no idea that his interactions with Boy would be any different. When Christian ambled right over to the fence to check out his new friend, Boy hurled himself violently against it in anger. This process repeated itself day after day until Christian finally learned to show submission to Boy. Then the fence was removed, and it was time for the newly-united Christian and Boy to start establishing their own pride on the Adamsons’ nature reserve. Then it was basically like every buddy-cop movie you’ve ever seen, with the curmudgeonly older dude slowly warming to the young hotshot—think Men in Black with zebras instead of aliens.

After a few years, George Adamson called Rendall to let him know that Christian’s pride was now self-sufficient, and that he, his females, and their cubs rarely came back to camp. Although Rendall and Ace were thrilled that their pampered London lion cub was now fully acclimated to the wild, they missed their friend. So they decided to travel to Kenya in order to say a final goodbye. GET READY, because here’s what happened when they did (this is actually the second time they went back, bringing a film crew with them, but it was a repeat performance of that first reunion):

HUGE LION HUGS, just like the ones Christian used to give as a cub. Even as a wild and free adult lion, he still loved his friends, showing his joyous affection by bashing his head into them repeatedly. Look at the way he sprints up to them when he recognizes who they are after years of being away! DAMMIT, CHRISTIAN, YOU ARE BREAKING MY HEART. FINALLY, PROOF that love transcends species, and that it lives on even in the wildest (LOL) situations.

There’s a lot to adore about the story of Christian the lion, but I think what’s most special about it is that the people involved didn’t love selfishly. Despite their attachment to Christian, his human companions knew it wasn’t right to keep him cooped up, however swankily, when he should have been stalking the shit out of some zebras on the plains in Africa. When you see Christian hug Ace and Rendall as a full-grown, healthy lion with a family of his own, it’s clear that they made the right choice. And also that lions are adorable. ♦