Shoplifting was my secret other life. 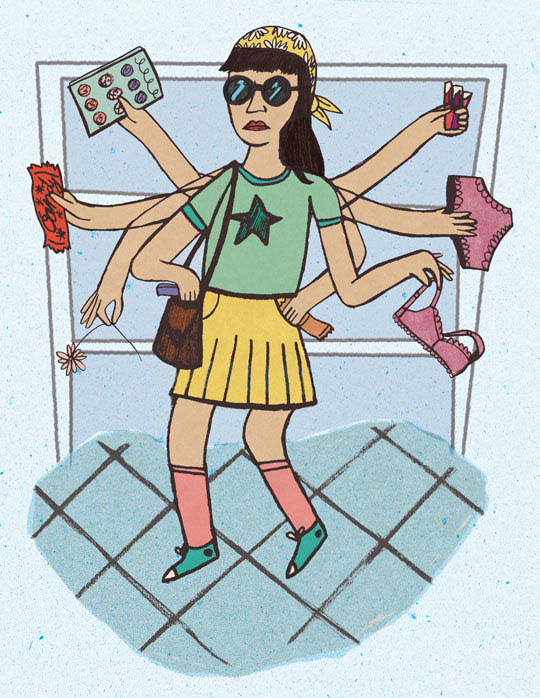 It started with my grandmother grabbing napkins from the dispenser at McDonald’s. She would stuff her pockets and sometimes mine full of them, as well as ketchup packets and straws. I was six and already an accomplice to a crime. One time we made off with a month’s worth of mayonnaise packets only to discover that the smell of mayo made my entire family gag.

When my family first started shopping at Price Club–a chain of mega-discount warehouse stores where you could get a giant tub of black pepper that would last a good three years for the price of a large soda–I would loiter in the candy aisle while my parents went to the back to buy meat, frozen shrimp, and croissants. I would hover near the chocolates, furtively working on tearing a hole into a bulk-sized box of M&M’s or breaking the plastic seal on a container of individually wrapped AirHeads. I would grab what I could and slip the candies into my pockets. After a while, I became brazen enough to unwrap the candy and eat it while walking around the store. I was eight, and my own criminal life was just beginning.

Around that time, I met my best friend and eventual accomplice, Diana, who was a year older than me and whose mother was good friends with mine. Diana and I bonded over how much we despised the things that people told us to love (you should enjoy being a child) and how much we loved things that our parents told us to stay away from (those ghost stories will fill your heads with garbage). When we were 10, we’d go to this drugstore called Rock Bottom and spend hours picking out stickers and stationery to add to our personal collections. I would always blow my money on the most expensive set, and Diana would always find a way to make hers go the distance.

I watched her grab a pen that cost 79 cents, carefully pull the price tag off of it, and place it on the plastic-wrapped stationery set I had been coveting. Then she pulled the original tag from the stationery and put it on the pen. “Ta-da! I can’t wait for some idiot to buy this pen for $4.56.”

We’d walk through every aisle looking for something cheap enough to switch with the tag of something we wanted, but couldn’t afford. We had this idea that we’d do it every day and after a few months, the store would go bankrupt, have a liquidation sale, and we’d be up to our ears in beautiful things.

In fifth grade, I was a latchkey kid, and it was a major year for me, because my parents not only let me walk home without an adult escort, but I was allowed to make the five-minute walk down the street to our neighborhood 7-Eleven. My ritual was the same every time: I would put on my mother’s water bras and heels, lining the insole with double-sided tape so I wouldn’t slip out. I’d press my body right up against the counter and squeeze my water breasts together like I had seen women do in movies, and I’d push a pack of gum across the counter with my index finger (another movie thing), and all the while my other hand would be reaching for a pack of Twizzlers or an individually-wrapped Warhead gumball that I could slip into my jacket. One time, I was bold enough to grab a Slim Jim and slide it into my fake cleav while the guy at the register had his back turned. I would buy things that seemed necessary and steal what I deemed to be luxury items.

The first time I really thought someone would catch me was in a store called Liquidators, where my father would go to buy power tools. I was 11. No longer content with fake tits, I wanted real ones. It wasn’t enough to wear my mother’s heels, I wanted my own. I wanted my lips to look more sultry and full. I remember loitering next to a set of mini lipsticks that were supposed to be for young girls like me—training lipsticks in vomit pink and cotton candy and sparkly watermelon that my mother outright laughed at when she saw me pawing at them.

“I can give you six tubes of real lipstick that I don’t wear anymore, and they’ll be better than that crap.”

I didn’t want my mother’s hand-me-downs. I didn’t like her mature mauves and corals. I wanted these, which I would probably use once and never touch again. I slipped them into the pockets of my skirt and refused to stand next to my mother during checkout.

When we neared the exit, I saw a sign stating there were cameras on the premises, and I saw the alarms that I assumed would beep immediately and alert the authorities of any shoplifters, who would then be apprehended and thrown in jail. I swear I saw these exact words written on the sign: NO MERCY. ALL SHOPLIFTERS WILL BE HANDCUFFED IMMEDIATELY AND TORTURED BEYOND WHAT IS HUMANELY POSSIBLE FOR STEALING A TUBE OF LIPSTICK. I stopped dead in my tracks.

My mom held the door open for me: “Well?”

I clutched my stomach and said that I was in pain.

There I was, on one side of the alarms, and my mother and father on the other. I couldn’t move. “Let’s go already,” my mom said. Impatient as always, she grabbed my hand and yanked me through the doors, pulled me well past the line of vision of those cameras that were supposedly recording my every move, and told me to get in the car. As my father pulled out of the parking lot, as I waited to hear the sounds of police sirens behind us, it slowly dawned on me that the sign I saw in the store was not a promise but a threat, that the world was not capable of tracking my every move, that in the grand scheme of things my deviancy was negligible at best, and once I understand all that, I was free.