Stick this on the fridge. 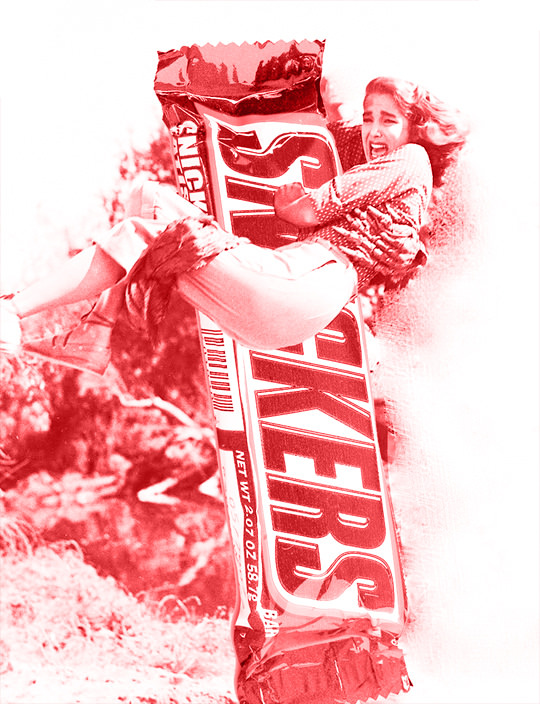 It would happen at least twice a day: I’d be wiping the counter at the coffee shop, pulling espresso shots, making new drip coffee—and I’d feel it. It was always a different woman, but always the same scene: a woman in her mid-30s to mid-60s, hovering over the glass pastry case, staring at the brownies. I’d head over to help her, wiping my hands on my apron.

“Can I getcha something?”

I could predict where we were going with my eyes closed.

“Oh. Well. No,” the woman would say quickly.

“OK.” I’d turn around, put cookies on a plate, put the plate into the pastry case.

I was waiting for it. Here it came.

She’d lean over the counter and say, “Those raspberry brownies sure look good.”

“You know, I have been good,” she’d say, with a faintly creepy, conspiratorial we’re-just-two-girls-in-this-together-right-honey tone.

“You know, I could maybe split a brownie, they’re really too big for one person, don’t you think? Maybe I’ll just have half.”

“You don’t? Really? Seems like you could do brisk business with, y’know, women—hahahaha!—who just want a little bite. It’s so big, really, I’m not sure I could eat that much. Hmm. All right. I mean, I’m gonna be kicking myself for this later, but sometimes a girl just needs a snack, you know what I mean?”

And there would be a line backing up out the door of the coffee shop and she’d still be dithering and I’d want to like rip my hair out and scream “JUST EAT THE FUCKING BROWNIE OMG YOU DON’T NEED MY PERMISSION AND YOU DON’T NEED TO FEEL GUILTY ABOUT WANTING SOMETHING HOLY SHIT.”

I mean, if you feel guilty about just eating a brownie that you want, what else in your life do you want that you’re not expressing?

Girls and women of the world, could we stop apologizing for wanting and eating food? Because this is one of the most ridiculous things that we do collectively as lady-people, and not only does it annoy the shit out of me personally, but it is also INCREDIBLY SAD. Could we stop feeling “guilty” for wanting an effing brownie? Or a plate of fries? Could we stop actively seeking permission from our friends to go ahead and “be bad” and order the cheesecake? Could we all just go ahead and order whatever it is that we feel like eating, instead of saying, “Oh, I feel like a pig, you guys are just getting salads”?

Because—now I know this will come as a shock—WOMEN EAT. We get hungry. We get hungry for pizzas and Double Stuf Oreos and nachos and ice cream and giant French-toast breakfasts, and you know what? WE DON’T NEED TO FEEL BAD ABOUT THAT.

Here I am making a vast and sweeping gender stereotype, but do you ever, ever hear dudes say “I just want a little bite” or “This is so bad, you guys, but I totally ate a whole pint of Ben & Jerry’s last night”? No! Because it’s OK for men to eat! Men get hongray! Men need frozen dinners called “Hungry-Man”! Men need Manwich! Boys are allowed to grow into men, but “attractive” women in our culture are expected to stay at pretty much an eternal pre-adolescent weight. What’s society’s current ideal man look like? Fit. Big muscles. What’s society’s current ideal woman look like? Thin. Really thin. No hips. No belly. Hairless except for the head. Basically a 10-year-old girl with boobs added for sex appeal.

You see it everywhere—every café, every restaurant, every kitchen across the country. Women bargaining with waiters and friends about whether or not they should get a side salad or fries with their entrée. Women making demeaning jokes to one another about their desire for food, like “Once on the lips, forever on the hips” and “Well, it’s midnight, so technically your body doesn’t know whether it’s today or tomorrow, so the calories zero themselves out, hahaha” and women bonding with one another over their shared guilt! You’re being bad and getting the chocolate cake? Ooh, now that you’re doing it, let’s both be really bad, and I’ll order the key lime pie and we won’t tell a soul, will we? It’s just us girls!

Why are we apologizing for wanting food? What the hell? BODIES NEED FOOD. WE DIE WITHOUT IT. Food tastes good! And we’re programmed to crave it! Sure, some food is healthier than other food, but what is up with punishing ourselves for wanting pickle chips? Why is it acceptable—nay! encouraged!—in our culture for women to feel guilty and publicly “admit” our guilt for wanting to eat a cookie? Why are we rationalizing our “bad behavior”—you know, our EATING—with statements like “I’ve been really good lately” or “I’m gonna need to walk this off later”?

It makes me insane.

I want this to end.

I want women to allow themselves to want food. I want women to be hungry and ask for what they want to eat without apologizing. I want women to stop looking for permission from others before they eat something that is not a carrot or spinach. I want my friends to get the chili fries if they want the chili fries, and not say something like, “It all goes straight to my ____” (hips, thighs, butt, etc.). I want to see a girl sink her teeth into a huge cheeseburger and fries and not cut the burger in half to save some for later. I want my mother to allow herself more than one small square of dark chocolate per day. I want women to take pleasure in food, without punishing ourselves for wanting it.

Hear me, womenfolk: I want all of us, everywhere, to stop apologizing, stop rationalizing our behavior, and just eat the damn brownie already. ♦