Cutting the Ties That Bind

I hardly ever speak to my family, and it’s one of the best decisions I’ve ever made. 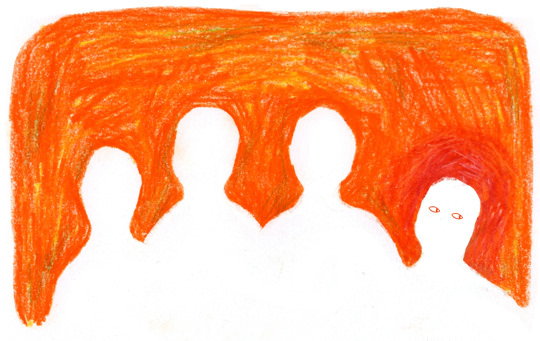 It’s easy to think of freedom in terms of family: you want so much of it, and it seems like they never want you to have any. Sometimes you just want a little space to figure things out, to make your own mistakes, to ignore their advice, and sometimes you just fundamentally disagree with them. And occasionally, you really, truly cannot imagine sharing a room with them, let alone DNA. I hardly ever speak to my family, and it’s one of the best decisions I’ve ever made.

And it WAS a decision. I actually woke up one day, after years of therapy and fretting and generally feeling terrible about myself, and said, “The reason I feel crappy is because my family makes me feel like crap, so I’m done with them for a while.” I’m not a mathematician by any stretch, but the equation seemed pretty clear: family + Danielle = misery/therapy/crying/overanalyzing every decision I ever made to the point of paralysis. Meanwhile, Danielle – family = pretty well-adjusted chick. They’re good people, but we just have really different ideas about what I should be doing with my life (according to them, having babies [no, thanks]) and where I should be living (down the street from them in my tiny hometown). It really stresses me out to talk about this kind of stuff on the regular, so I started backing off as a way to avoid disappointing them and also to feel good about the choices I make. I am not usually the one who initiates a phone call. If I’m visiting and things get hairy, I say, “OK, I think we should talk about this later,” and physically walk out of the room or house. If an email takes a turn toward the judgmental, I take my time responding (or maybe don’t write back at all).

I’ve had a pretty strained relationship with my mom for most of my life. I haven’t lived with her in a long time, and I’ve never met my dad. My older brother and I moved in with my grandparents when I was 10 years old, and my mom was having a hard time. They became our legal guardians. It was weird in that it was hard to explain, because none of my other friends lived with anyone else other than their parents. From early on, I had to develop a language to talk about family that wasn’t in keeping with a perceived norm. Since I didn’t live with my mom during my most formative years, I never really felt like we knew each other, and while we were civil and generally got along when I did see her (a few times a year), we never quite gelled in a “let’s go shopping and talk about boys” way. I was always quick to tell people that I didn’t really like my mom, and they always tried to tell me how terrible that was to say. But I really didn’t KNOW her, and what I did know about her was that we had different thoughts about everything ranging from hairstyles to music to books to what I was going to do when I grew up. I felt very bottled up around her: we couldn’t talk about pop culture, she didn’t know any of my friends or what constituted my daily routine, she’d never regularly attended any of my softball games or drum corps parades. And I felt like we couldn’t talk about the elephant in the room, which was: Hey, we don’t live together, and isn’t that odd?

It’s definitely hard/harsh to admit that you fundamentally don’t like the person who gave birth to you. But isn’t it worse to force an uncomfortable relationship with someone just because you’re related? While it was a little unorthodox, I think the experience of not living with but needing to find ways to talk to my mom made me realize that contact with your family isn’t always a given.

There’s a difference between being annoyed by your family in general versus actually feeling like you come from the another planet. I’m not talking about ignoring your dad for a while after you find out his politics differ from yours. Don’t start filling out paperwork for emancipation just because your parents are refusing to increase your allowance. I’m talking about the deep-down feeling that you really have very little in common with your family; that you love them, but maybe don’t like them; that without the biological connection you wouldn’t ever interact with these people at all; and, ultimately, that they may be standing in the way of who you want to become.

My situation is definitely at one extreme of the spectrum, but there are a lot of reasons that people end up drifting away from their families. You could have a great relationship with your parents but still feel smothered by them. Sometimes being really close with your parents is its own trap, because you’re fearful of disappointing them, and you want them to be happy with you no matter what. Putting distance between yourself and your family can take the shape of not wanting to go to church anymore, deferring college (or going to college), wanting to live with the person you’re dating, or whatever experiences don’t fall in line with their vision of how you should live your life. There are gradations of family pressure that affect your willingness or ability to interact with them while you’re trying to maintain your independence.

And independence is ultimately what it’s about, right? You want to be your own person, but sometimes you’re not able to discover who that is within the family dynamic. It’s important to understand and investigate what you want and need out of life without feeling like you’re letting people down in the process. The thing about family is that it is largely based on roles, and, a lot of the time, not wanting to engage with the people you’re related to is just your way of saying “I’m not going to fit in this box you’ve made for me.” You want them to see you as you are, not as they imagine you to be. If distance, physical or otherwise, helps you get to a better place in your life, you need to trust your instincts.

A lot of us are taught pretty early on that there’s some facet of caretaking that comes with being a girl, and we’re sort of coached on how to make or be part of a family, sometimes to our own detriment. It used to make me really mad that no one trusted my opinion regarding my mom when I was a kid, and no one said it was OK if we didn’t have a great relationship. The implication was that there was something wrong with me for not wanting a close relationship with my mom, and it felt like I was punished for knowing a little too early that you can’t always lean on your parents for personal validation.

Sometimes the hardest thing about putting distance between yourself and your family is the fear that they’re the only people who will offer you unconditional love. But not having a close relationship with most of my family really gave me space to develop some amazing friendships. Friends can know, love, and accept you in a different way from how your family can. One friend might be great at talking you through a breakup, while another is willing to jump off of a stack of speakers at a concert with you. It’s not easy to break free from the family structure when you’re still in high school, but that’s when you start to find your people.

As you get older, you eventually meet friends who have had similar experiences, or at least make you feel less weird about your own. I have friends who love but are estranged from their parents for different reasons, and this tends to make us closer. One of my friends doesn’t really talk to her parents, because they are really religious and disapprove of her living with her boyfriend before marriage; instead of having that conversation every single time she talks to them, she just doesn’t call them very often. But I also have friends who talk to their parents every day, and while we can’t connect on that level, we have so much in common that it doesn’t matter. Over time you get to a place where you’re not defined by your family, but rather by who you are, and then no one really uses your family as a way to figure you out.

Even though I eventually started talking to my mom a few times a year, she isn’t part of the fabric of my life, and I’m much better off for it. We’ve worked through all of our issues, so it’s not like I’m holding a grudge. I just recognize that we’re not close, and that’s totally OK. My mom just found out a month ago that I got married last Halloween. No one in my family was there, but two of my oldest friends flew in from New York for the day, and I had the best time ever. When I graduate next year, I’ll be looking for Sarah, Sandra, and Zan in the crowd, because they’re the ones who answer my frantic calls about homework and general anxiety about finding a job. I talk to my brother every few weeks and my grandma once a week, but in both instances I insist on keeping it light: our relationships survive because I refuse to engage them in any discussions about how they think my life should be versus how it actually is, and I’m not afraid to back off if it gets too intense. When I’m done, I send novel-length emails to my friends about how crazy they make me, and they invariably make me laugh or reaffirm my decisions or suggest we meet for massive quantities of cupcakes and pizza. ♦