Three Is the Loneliest Number

Being friends with JJ was like having a superpower. But it was also like being invisible. (Which is also, come to think of it, a superpower.) 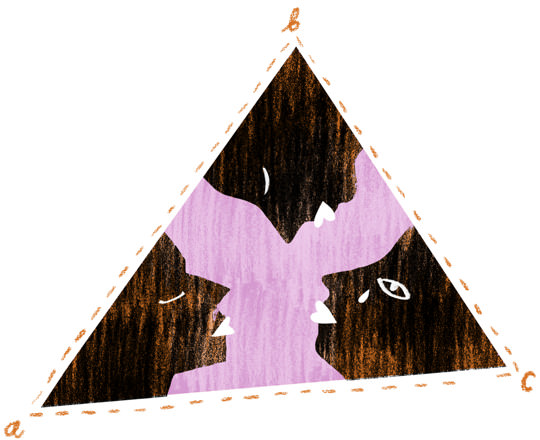 This is a true story; some names and identifying details have been changed.

It seemed impossible from the beginning. There was no way he would like me. Guys like that always liked JJ; everyone always liked JJ. When male humans even talked to me it was generally to find out something about her—or inevitably the conversation would turn to them dropping hints about how much they liked her, assuming I would instantly parrot their compliments back to her. I did, of course, because we were best friends. Though instead of the breathless relay of their opinions it was mocking imitations, usually, followed by JJ cackling until she almost peed her pants.

Men: your worst fear about what teenage girls are doing behind your back is totally correct.

You couldn’t blame everyone for being in love with JJ—she was effortlessly nice but not in a gross fake way; you would hang out with her once and want to be friends for life. She was pretty but didn’t rely on it. She was tough and had tattoos and looked like a “bad girl,” but she was incredibly sweet. Being best friends with a girl like her, having a million stupid secret jokes with someone so popular and radiant, feels like having a superpower—but it’s also kind of like being the vice president. You are also invisible. (Which is also, come to think of it, a superpower.)

I got used to being invisible. There was no reason Josh would like me—I wasn’t exactly hot property standing next to JJ. We had all met at the same time, after an Esoteric Napkins show at Neon Cave—everyone went back to the band’s rancid little house, made spaghetti, and watched a Simpsons rerun. I drank a beer and tried to act like it was something I kicked back doing all the time. JJ regaled the boys with tales of our band’s worst shows—an open mike at the flower shop with our old singer, who thought he sounded like Eddie Vedder but was definitely more the cat-in-a-blender type. The band dudes were enthralled, laughing at all her jokes. JJ was my passport out of high school, transporting me into a life that was lived un-boring ever after.

That’s when I saw Josh. He walked in and for some reason sat down right next to me. He had messy black hair and was older and cooler than the dudes in the band. Typical mysterious bad boy—except somehow he wasn’t typical at all. He leaned over and made a joke only I could hear, making fun of one of the band dudes. I made one back. We had an instant allegiance. All night I kept checking to see how he looked at JJ: Was she showing up on his radar? Was he leaping up to light her smoke or asking dumb questions about her drum kit just to make conversation? Even though he wasn’t, I figured it was a matter of time until I got an FB message from him asking for her number.

After that night our band started opening for Esoteric Napkins whenever they played an all-ages show, which meant hanging out with Josh, who despite not being terribly friendly, was in charge of selling their CDs. I would hang out behind the merch table and we would make fun of bands and talk about records while I kept my arms firmly locked to my sides in the hopes that he wouldn’t notice how just talking to him made me sweat like I was in the desert. After every show, JJ and I would run the play-by-play as we loaded our gear into the trunk of her car, trying to find sure signs of regular like or like-like.

And then it happened. An awkward confession fueled by half a beer while we stood on the porch of the Esoteric Napkins house, which turned into a kiss, which turned into two weeks later we couldn’t stop saying “I love you.” I started spending all my time with him, and would only see JJ at band practice.

Fast-forward past the summer, past a winter that was mostly spent practicing or partying at the Napkins house and a few torrid, jealous fights with Josh that continued from the porch, to texts, to insane epic emails and back to the porch again. I would tell JJ about it during our smoke breaks at band practice, but feel weirdly ashamed—we still had our band, but I had nearly dumped our friendship for this bad boy who was maybe a little too bad, and now I expected her to understand. But that is how best friends are—they get it. I realized she understood when she looked at me and said, “Boys don’t matter.” It was her way of saying our bond was deeper and more serious than even my and Josh’s love.

In April, after I caught Josh doing coke, JJ was the one who told me I deserved better over and over again until I believed it. Josh begged me, crying, not to break up with him, so I said it would be “just a break.” I hoped it would just make him see he needed to get his life together. He promised me he could. He was going on tour with the Napkins for two weeks, and I hoped he would miss me so much that he would realize that I was more important than partying. Then we would work things out and continue happily as before.

And somehow, one night, in the van after a show in Madison, he confessed his heartbreak to JJ, who had started half-managing the Napkins, and they started commiserating on all the ways I had hurt each of them. And how I was too young to understand how partying wasn’t that big of a deal. And then, suddenly, they had a bond only they could understand—and it was based on talking shit about me. Somehow, this didn’t stop them from taking a bath together and then hooking up for the whole rest of the tour.

I knew something was up because his calls were suddenly no longer tearful; they were two minutes long, and then magically he had to go. Once he got home from the tour, there seemed to be nothing to work out. I tried to convince myself it was just another one of his depressions, even though I sensed it wasn’t. I tried to talk to JJ about it and she bit my head off, telling me I was too judgmental and I should just break up with him if I had so many problems with how he was acting.

Her reaction put all my random fears in order. I hadn’t let myself see it before because I thought there was no way. There was no way my very best friend, whom I had told all my secrets and all my crushed-out goo-goo about Josh to, would betray me. The next day, I did what I always swore I wouldn’t—I wouldn’t be one of those girls that goes through her boyfriend’s texts. Apparently, Josh didn’t think I was that type of girl, either, because he hadn’t even bothered to delete all the ones from JJ. And there they were. Months’ worth. Stuff about me, stuff about them, words and phrases that burned into my brain. There was no way to unsee them.

My confrontation with Josh was brief, real “To the Left” style—it went something like “Fuck you! How could you do THIS?!” then his pitiful explanation about how he was so heartbroken and she came on strong and he missed me so much it was hard to say no, and then me deleting him from my phone on the way out the door.

My confrontation with JJ was three hours of screaming and crying and then screaming some more. She begged my forgiveness; she didn’t have an answer to any of the hundred times I asked “Why?!” I could only talk to her on the phone because I couldn’t even bear to see her—it was too much. She had broken my heart more than he ever could. ♦