Clothes for afternoons on the Astral Plane.

Paradise Without a Plane Ticket

“Why seek any further without for that which lies within?” –Father Yod 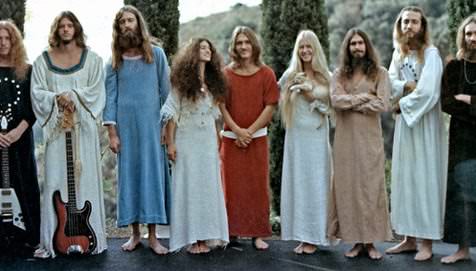 When you say the word cult today, most people think of the Manson family and Helter Skelter, which is a bummer because murder sprees were not the norm for the culty communes of the ’60s and ’70s. Take, for example, the Source Family, the legendary Los Angeles “spirit commune” founded by James E. Baker, a decorated World War II soldier and jujitsu fighter who briefly worked as a Hollywood stunt double. In the late ’60s, Baker restyled himself as a spiritual guru named Father Yod (also known as YaHoWha) with long white hair and a pretty serious beard. Father Yod began tooling around L.A. in a chauffeur-driven white Rolls Royce, preaching his own personal gospel of mysticism and spiritual enlightenment through the holy hippie trinity of meditation, vegetarianism, and rock & roll. 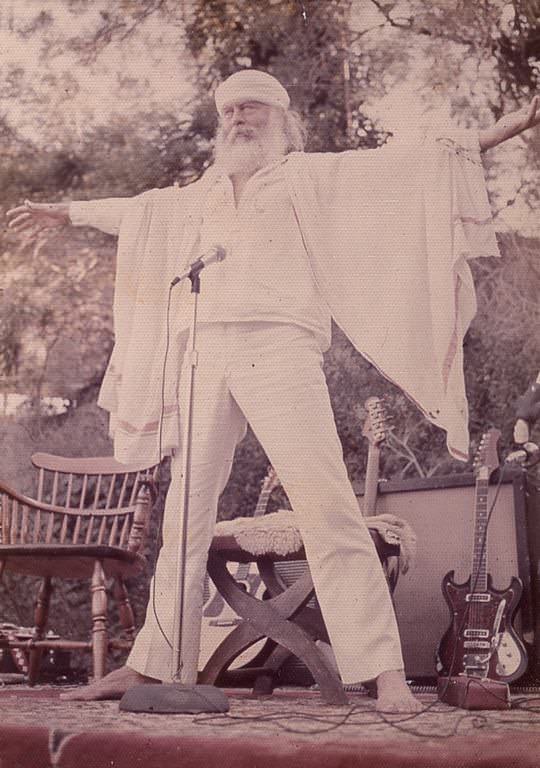 Even though Father Yod looked like a hippie Santa Claus and his religion was a confusing stew of New Age-y ideas (with lots of talk of “pyramid mirrors,” “sacred shins,” and “moon chakras,” maaan), he eventually amassed more than a hundred followers and lived in “The Father House,” a mansion in the Hollywood Hills, with most of them (rumors flew that the house was bought with bank robbery money, but the rumor-mongers didn’t take into account Yod’s fortune, which he amassed by starting a series of organic restaurants in Southern California). They called themselves the Source Family. 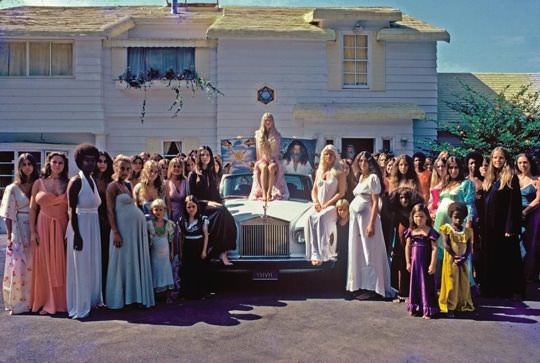 Image via The Source Documentary

The Family was a common sight along L.A.’s Sunset Strip in the early ’70s. Groups of strangely serene young men and women would wander up and down Sunset Boulevard in long gauzy gowns and velvet robes, street-preaching and recruiting new members to their self-proclaimed “Aquarian tribe.” An enterprising bunch of hippies, the Family also opened one of L.A.’s first totally vegetarian restaurants on Sunset Boulevard. The Source Restaurant served “vibrationally pure” cuisine to John Lennon, Marlon Brando, and other diners not freaked out by a bunch of glassy-eyed long-hairs serving them dishes like the “Aware Salad” (lettuce, grated beets, and alfalfa sprouts). By the way, the Source Restaurant is where Woody Allen filmed the breakup scene in Annie Hall: 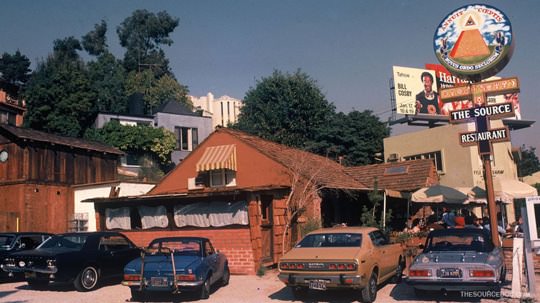 The Father House in the Hollywood Hills was like this spiritual boot camp where music and meditation were a part of everyday life. Each day, the musicians of the Family would rise at 3 AM (because that’s when the “ascending currents” were best or something), take a three-minute cold shower, meditate, then gather in the soundproof garage that served as their recording studio for long psychedelic jams with Father Yod on lead vocals. Under names like YaHoWha 13 and Spirit of ’76, the Family released more than 60 limited-pressing records of chants, prayers, and instrumental riffs, which they sold for a dollar each at their restaurant. Those records became legendary among collectors of obscure ’60s rock—the first time I heard about them, a friend of mine just said, “This is some of the most kick-ass psych of all time.” He was totally right. 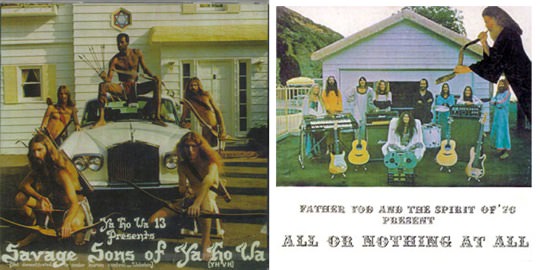 Drag City has been doing an amazing job reissuing the Family’s transcendental psych records over the last few years. I recommend Children of the Sixth Root Race’s Songs From the Source and Father Yod and the Source Family’s Magnificence in the Memory. There’s also a new documentary film, The Source, that tells the whole crazy saga of the Family. It premiered at this year’s South by Southwest Film Festival, is currently playing on the film festival circuit, and will hopefully have a wider release soon. You can check for release dates here. 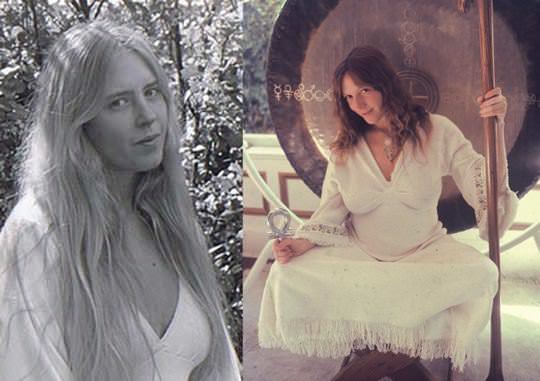 Father Yod passed away in a freak hang-gliding accident in Hawaii in 1975, but a small tribe of his followers keeps the flame alive, with members like Isis Aquarian spreading the word of Yod through books and her seriously gnarly YaHoWha website. A huge number of the Aquarian tribe were women, and while their devotion to Father Yod may have bordered on creepy, you cannot deny that the Mother Angels of the Family looked AMAZING: 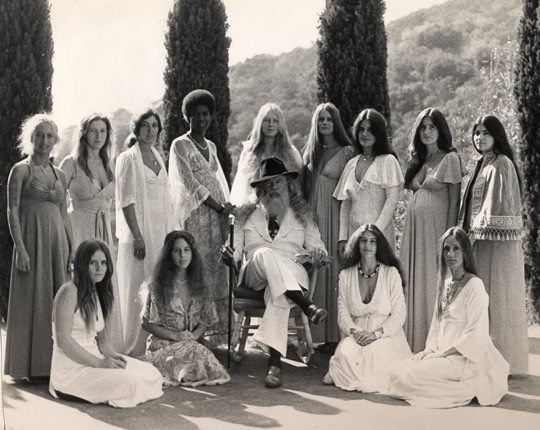 Father Yod was not above throwing off his guru robes for the occasional custom-made three-piece suit—as in this photo, where he looks about as gangster as a spiritual guru can get—but the ladies of the Aquarian tribe kept it simple and ascetic in long flowing cotton dresses, center-parted hair (or “cosmic roots,” as the Family called it), and makeup-free faces. Accessories were usually simple hippie headbands, arm cuffs, or jewelry adorned with the Egyptian ankh, which the Family believed to be a symbol of love with a “female polarity.” Oh, and the Family also wore LOTS of white… 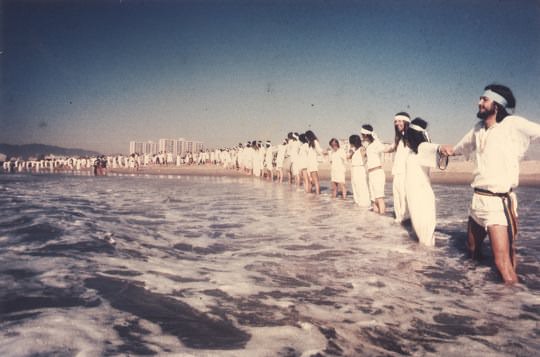 …that is, until one day when Father Yod had a vision and commissioned Family fashion designer Galaxy Aquarian (who now goes by the significantly less fun name Dawn Hurwitz) to design an entire rainbow of velvet robes. You gotta love a cult that appreciates the power of fashion as well as fluid condensers, right? 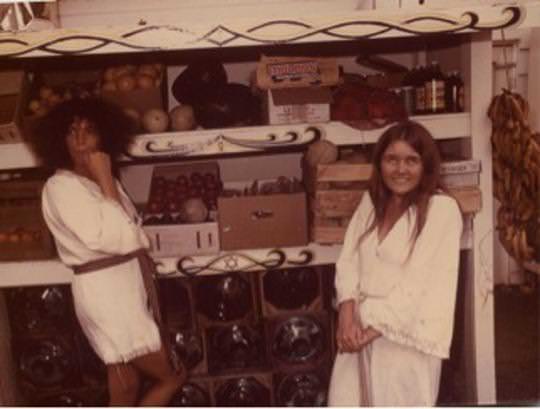 Get in touch with your inner moon maiden in long broomstick skirts and shiny shoes the color of a mirror pyramid. It’s a perfectly ethereal Mother Angel look that would make the White Magician proud. 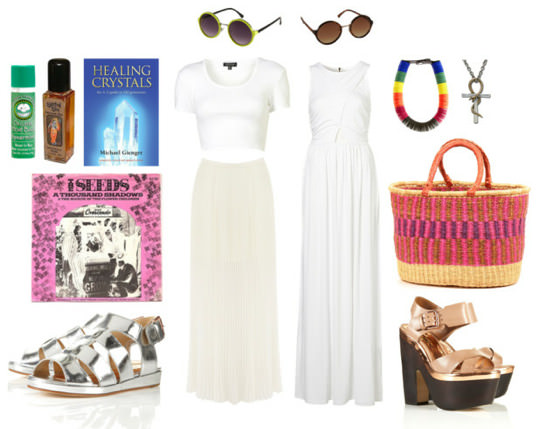