I was standing in Tomorrowland, and all I could think about was yesterday. 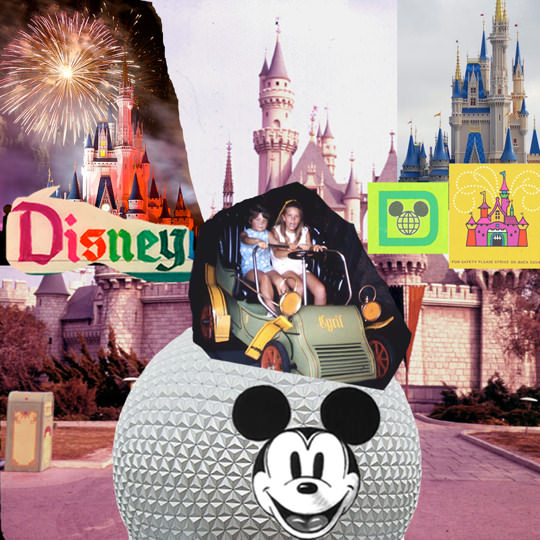 When my sister was six years old, she went to Walt Disney World and temporarily lost her shit. We had just finished a go-round on Mr. Toad’s Wild Ride, a Wind in the Willows-based attraction that ended, if I remember correctly, with the light from an oncoming train threatening to take out all of the ride’s passengers. I was eight at the time and knew that it was unlikely for vehicular homicide to be a part of the “Disney experience,” so I laughed when the car swung around at the last moment and pulled us back to the entrance. My sister, however, flipped out.

First, she screamed. Then she cried. She refused to listen to reason. We had been in Orlando, Florida, for four days, and the vacation was taking its toll. “She’s exhausted,” my mother said as my sister sobbed about the train while eating a Mickey Mouse ice cream pop. She later confirmed my mother’s diagnosis at dinner by falling asleep while eating a grilled cheese sandwich. “Exhausted,” my mother said again.

Of course she was exhausted. We all were. My parents and my older sister, who was 15, seemed to be exhausted by the lines and the humidity. My younger sister and I were exhausted from the emotional stimulation. We were at Walt Disney World! We didn’t take a vacation like this every year. This was a special trip, one that we weren’t sure we’d ever make again. It was too much to take. There was so much magic and so little time.

We hugged costumed characters and begged for their autographs. We ate breakfast with Mickey and Donald, rock stars on the level of Madonna or Michael Jackson (it was the ’80s, OK?), and felt honored to be in their silent, waving presence as we ate pancakes in the shape of Mickey’s head. We rode the Haunted Mansion a million times and were convinced that every single instance of “technical difficulties” was the result of actual ghosts messing with the ride. We got picked to ride the Honey, I Shrunk the Kids bee, which I still brag about to this very day, for obvious reasons.

We believed in everything and took it all in like we were visitors to an alien land. The sarcasm and cynicism that would define us as we got older hadn’t seeped in yet—we still wrote letters to Santa Claus and freaked out when he ate the cookies we left for him—and we felt as though we’d been given the keys to an alternate universe where the world was designed for kids, for fun, for happiness, sort of like that island in Pinocchio, only without the cigar smoking and horrific donkey transformation. We were Goonies. We were Lost Boys. We were on an adventure, placed in a world that we’d dreamed about for as long as we could remember. It was, my sister noted, even more beautiful than it looked on television.

When it was time to leave, we were each allowed to pick one toy from the Disney store to bring home. I chose Elliott from Pete’s Dragon. My sister chose the Cheshire Cat from Alice’s Adventures in Wonderland. Magical creatures, naturally. We held them on the plane ride home and sighed dramatically as Florida fell out of sight. We never wanted to leave. We made promises to return and blew kisses to the air. We were in love.

“If Pluto tries to hug me one more time,” I said to my sister, “I’m going to kick him in the face.”

It was eight years later. Our cousin was getting married in Florida, which gave the entire family an excuse to go to Disney World for a few days. I was 16 and perpetually gloomy, worried about a boyfriend who was, as I suspected, crafting his “you’re dumped” speech while I was away. I had entered what Eglantine Price in Bedknobs and Broomsticks calls “The Age of Not Believing”: “When you set aside your childhood heroes / And your dreams are lost upon a shelf / You’re at the age of not believing / And, worst of all, you doubt yourself.”

I spent a good portion of the trip down scribbling in my journal about “corporate bullshit” and how unfair it was that I had to go to a wedding at the exact moment I had realized that love was dead or whatever. Also, Florida was hot, and my mother said I had to wear shorts or I’d “sweat to death.” Shorts! I hated shorts. I hated everything. We were in “the happiest place on Earth,” and I was miserable.

There is a small window for a certain type of magic: you can love the idea of Santa Claus for as long as you live, but you only get to believe in him once. The same holds true for Disney World. There comes a point when you realize that there are people underneath the costumes, when the animatronic pirates look silly rather than scary, and when you find yourself saying things like “Can you believe how much they’re charging for ice cream?”

At night in our hotel, I’d try to call my boyfriend, who would make weird excuses not to talk to me, or say things that made it fairly clear that he was thinking about not talking to me when I returned. You know that stage right before someone dumps you, when they’re trying to decide whether to go through with it, and you can see it coming but you hope that they’ll miraculously reconsider? It was that stage. I could feel it in my heart. Even browsing the gift shops for something to bring back to him felt like an act of desperation.

For years, I’d carried this memory of Disney as a magical place where nothing could go wrong. Yet here I was, surrounded by dream machines and smiling faces, and things were going wrong. I spent the nights staring at the hotel ceiling, trying to keep my heart from breaking, and the days walking around a giant wonderland, trying to keep randos in costumes from giving me hugs. I didn’t want any autographs. I found It’s a Small World terrifying as opposed to enchanting. (The line between “Neat! Dolls that talk!” and “Effing creepy, those dolls are singing” had been crossed at some point in those intervening years.) And I didn’t want to take the MGM Studios tour, because I was afraid I’d see the Honey, I Shrunk the Kids bee turned upside down and rotting in a back lot somewhere. I noticed the humidity, the lines, and the slightly sickening smell of fair food. And I also noticed the little girls walking around with their Minnie ears on, wide-eyed and screaming, pointing at everything they saw, their expressions wavering between excitement and exhaustion. They looked so happy. I was terribly, terribly jealous.

It is strange how a dream world can lose its hold on you, and how places that once seemed almost supernatural can fade into just another pile of concrete, costumes, and rides. To see that it still existed for other little girls was both heartwarming and heartbreaking. I wanted to go back. But I was ever so much more than eight, and the window had closed.

While walking around, I came across a ride that my family and I had ridden (and giggled through) at least three times during our first visit to Disney—the Carousel of Progress, an educational spin through time that showed us various eras in American history as we watched an animatronic family adjust to changes in technology and such. It was the kind of ride that Walt Disney loved—a chance to show the progress we’d already made while envisioning the future ahead of us. I seem to remember the final panel of the Carousel of Progress ending with the family dressed in silver space suits (remember, the ’80s), and the ride’s theme song is still stuck in my head: “There’s a great big beautiful tomorrow shining at the end of every day!”

The family on the ride just kept getting happier, and life kept getting easier, and the message seemed to be that tomorrow was only going to bring brighter and better things—and that General Electric sure was a swell company! When I saw the ride again, it was closed for some reason, progress on hold, which seemed fitting, as I was standing in Tomorrowland and all I could think about was yesterday.

When you’re younger, people like to point out all of the exciting things that are waiting for you. The perks of getting older are dangled in front of you as an incentive to leave childish things behind. It’s not as terrifying, for example, to have your teeth fall out of your mouth if you’ve been promised a visit by a fairy with deep pockets. But childhood is filled with mourning periods—things seem to move so fast that you become nostalgic for versions of yourself that exist only in awkward school photographs, girls who have your face but are too small to fit into any of your clothes. I wanted so badly to believe in the magic of the park—the way you want to hold on to Santa Claus long after you recognize that his handwriting is suspiciously similar to your mother’s—but the spell was broken. Toward the end of our trip, I ended up with the same sad feeling I’d had the first time. I didn’t want to leave. But this time, it wasn’t because I’d be leaving the fairy tale world behind. It was because I knew that a not-so-happy-ending was waiting for me at home. I couldn’t even hear “great big beautiful tomorrow” in my mind without making it sound like a Joy Division song. My younger sister noticed. “We’re at Disney,” she said. “You could at least try to have fun.”

And so, on our last day at the park, my younger sister and I took one last ride on the Haunted Mansion. Our car got stuck right in front of our old favorite ghost, the translucent one with the beating heart. “We are experiencing technical difficulties,” a gentle voice cooed over the loudspeaker.

“GHOSTS,” my sister yelled, and we started giggling and trying to scare each other. I was bummed when the ride started moving. For a second there, it seemed like everything was real again, and I didn’t want to leave. We spent the rest of the day going on our favorite rides, like Pirates of the Caribbean and Space Mountain, laughing and yelling and forgetting about the world outside. It wasn’t the same as when we were small, but it was fun. We were able to get lost. I let myself fall back in love with imaginary things.

On our way out of the park, we tried to find Mr. Toad’s Wild Ride, only to discover that the ride had been shut down. My sister played it off like she didn’t care. But as we walked on, I swear she turned to look behind us, to make sure she wasn’t standing in front of a train that never existed in the first place. ♦