I wanted to be her. 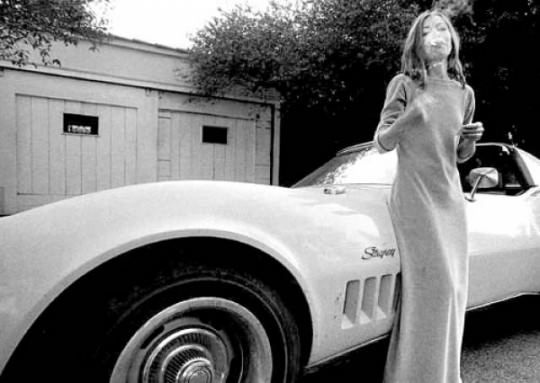 “Once, in a dry season, I wrote in large letters across two pages of a notebook that innocence ends when one is stripped of the delusion that one likes oneself. Although now, some years later, I marvel that a mind on the outs with itself should have nonetheless made painstaking record of its every tremor, I recall with embarrassing clarity the flavor of those particular ashes. It was a matter of misplaced self-respect.” —Joan Didion, “On Self-Respect”

I don’t remember exactly when I came to be reading Joan Didion’s Slouching Towards Bethlehem, or what took me so long to pull it off the shelf, but I do remember my exact point of revelation. I was living in a shitmazing, wholly unlegal loft, and I took the book out to the fire escape on a very sunny summer day and lay there with the iron bars pressing into my back. Despite my discomfort I stayed there the entire day, shocked and excited and enthralled by what I was reading, and how it made me feel about reading and writing. Each page made me feel ravenous for the next. The next day I went to the bookstore and bought all the rest of Didion’s books that they had—fiction and non—and sat on the floor of the store reading them for hours because I didn’t want to have to wait until I got home.

Joan Didion’s essays—about the heavy vibes and dismal glamour of Los Angeles, her life as a shy writer with social anxieties, the faltering morals of America as it existed in the late ’60s and the ’70s—felt like breathing new air. Her stories, reported and dreamed up, are so incisive and personal, the little details telling the entire story—it felt like the sort of writing I had always wanted to read but didn’t know existed. Didion writes journalistically, but she doesn’t take herself or opinions out of her work. There is history and culture, and she tangles up with it. Her writing is like normal life—she is not separate and unaffected.

“That was the year, my twenty-eighth, when I was discovering that not all of the promises would be kept, that some things are in fact irrevocable and that it had counted after all, every evasion and every procrastination, every mistake, every word, all of it.” —from Goodbye to All That

She can be stunningly sharp, almost cruel—but often more because of what she doesn’t say than what she does. She could get away with reporting certain scenes and certain stories because, as she has said, she was small and quiet and a woman, so no one assumed she was up to very much.

Joan Didion spent most of her childhood in California. When she was in college, she won an essay contest, and the prize was an internship at Vogue. That turned into an editorial job that she held for seven years. While she was there, she wrote her first book of fiction, Run River, which ties together all the elements that would pervade her early work: the particulars of place in California, privilege, death, anxiety—and women undone by all those factors, including, at times, herself. She wrote about almost getting a divorce, having a nervous breakdown, taking limos, watching the Doors record, being haunted after reporting on these hippies that were giving their toddler drugs.

“It is easy to see the beginnings of things, and harder to see the ends. I can remember now, with a clarity that makes the nerves in the back of my neck constrict, when New York began for me, but I cannot lay my finger upon the moment it ended, can never cut through the ambiguities and second starts and broken resolves to the exact place on the page where the heroine is no longer as optimistic as she once was.” —from Slouching Towards Bethlehem

She seemed to be living a comfortable life, but she seemed uncomfortable and lost in it; nevertheless, reading her books, I wanted to be her. The idea of being emotionally, psychically unmoored in that 1970s version of Los Angeles, chain-smoking and pecking out desperate essays on a typewriter, breaking in the evening to review the day’s pages with a similarly obsessive writer husband—well, it seemed like a pretty dreamy life. I think what I really wanted was the part about being a celebrated writer with a partner who understood and nurtured my talent. I wanted to be pictured on the back of my own books, looking coolly into the middle distance in my author’s photo, like her. 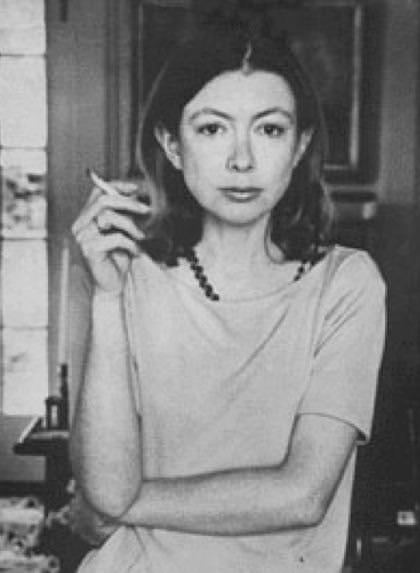 Before I encountered Joan Didion, I only ever envied the talents of tortured male writers, since that was the canon I was had been presented with, and at 22, I could at least identify with that tortured part. My young-years triumvirate was Tosches, Bangs, and Ginsberg, and I wanted nothing more than to be able to tear the world apart the way they did. Reading them made the world dissolve, but it also made me feel envious of their talents, their ability to articulate their deep lust for life. But those men—authors, poets, essayist, critics—lost me with their angry libidos, boyish neuroses, and forever-drunken hazes, and most of all with the ways they misunderstood women.

Didion made new sense—perfect sense—to me. How she lost and found herself in the world with her writing, and felt deeply the casual dread of her times. To be a young woman falling apart a little (or a lot) and finding a literary tradition about that place, written by a woman who could describe what it truly feels like to have lost the controls with taut, flawless sentences—it felt like the world had opened up to me. After being lost for years in a wilderness of contemporary literature that was basically “genius” dudes’ dumb thoughts on women, their drug-driven obsessions, and/or the world as it related to their boner, to find a woman who wrote so powerfully, in a way that resonated with my perception and experiences of the world—Didion was the truth. She still is. ♦