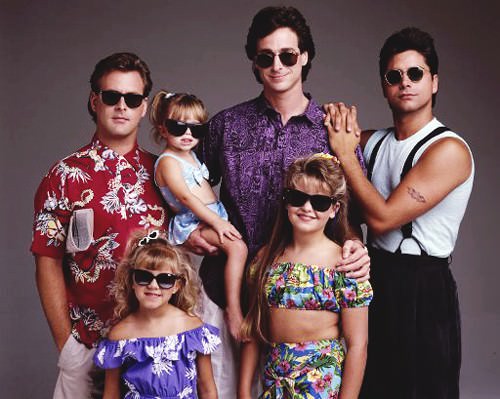 I love corny sitcoms, and there is no greater celebration of everything that makes a sitcom truly corny than an episode in which the characters decide to take a vacation. Vacation episodes have always been my favorite, especially when I was younger, and I got to watch D.J. Tanner or the friends of Friends travel to places I wanted to go, like Hawaii or Paris or Disney World. Seeing the cast abandon their usual set to head out on an adventure made me feel like I was going on an adventure, too—it was a special event, something that transcended the typical Friday-night pizza experience.

Sitcoms offer their audiences something intensely comforting: an ensemble cast coping with manageable problems in one of two (or maybe three) settings. At best, the familiarity entertains us; often, it simply distracts us. But taking the characters out of their element introduces the smallest amount of danger to the proceedings—or at least it feels that way. Watching everybody interact outside of the confines of whatever L.A. lot their series is being filmed on is both absurd and delightful. It’s almost as if we, too, have been sprung from the couch.

Even as a kid, I knew that most of these vacations were thinly veiled advertisements for hotels or amusement parks or what have you, but I didn’t really care, because it meant that everybody always got to stay at the best places, go behind the scenes, and, if you were Michelle Tanner of Full House, steal the “Princess for a Day” crown from your sister Stephanie while at Disney World and use it to be a total jerk to everyone.

The extended Tanner clan always had the best, most ridiculous vacations. My favorite was their trip to Hawaii, during which Danny led everyone to what they believed was a deserted island by mistaking a potato -hip crumb for a land mass on the map. Of course, it all worked out—they realize they aren’t on a deserted island after all, they’re just on the other side of the resort! And the whole thing ends with Uncle Jesse performing an Elvis song in front of a huge crowd. (Everyone always seems to know who Uncle Jesse is, which makes the whole thing funnier, because there is probably no musician on earth who would be that famous and still think it appropriate to live in his brother-in-law’s attic with his wife and their two children). After the aforementioned “Princess for a Day” drama, the trip to Disney World (courtesy of a little ABC/Disney cross-promo, no doubt) culminates in true Full House fashion, with everyone making up and coming together just in time for Danny to propose to his girlfriend with fake-looking fireworks as—wait for it—Uncle Jesse sings in front of a giant crowd!

OK, it was a giant commercial, but as a kid, whenever I saw ACTUAL commercials for places like Orlando or Hawaii, I wanted to jump right into the television. When D.J. got to swim with dolphins, it was a way to escape my bedroom vicariously—we didn’t have the money to get lost on Potato Chip Island, but I almost felt as though I’d been there for half an hour, too. (Perhaps for the best: riding dolphins is controversial these days.)

My favorite Saved by the Bell episodes are the ones where the Bayside gang is out of their element, liberated from the usual hangouts (a hallway, someone’s bedroom, the Max), because it seemed like they were vacationing like adults: no parents, no teachers, no Principal Belding. It was like reading one of those Baby-sitters Club Super Specials where they all go away to camp or New York or California and basically run around unsupervised, which is the stuff teen daydreams are made of.

There was the murder mystery weekend, of course, which delighted me as both a mystery episode AND a vacation episode, when the gang stays at a Clue-like mansion and has to solve what they believe is an actual murder. Then there’s the Malibu Sands arc, where they work and live together at a beach club and summer romance ensues. This includes an appearance by Denise Richards as an IDIOT who fakes her own drowning so that A.C. Slater will save her (ugh, sorry, former-lifeguard rage).

Finally, there’s the two-part Palm Springs weekend, which finds the gang at a hotel conveniently run by Jessie’s father, who is marrying a younger woman whom Jessie hates. Drama ensues: Jessie tries to break up the wedding, Zack and Kelly get back together for like three seconds, and Slater falls for the princess of a country that, in reality, doesn’t exist. It is so magnificently dumb. The best part? As soon as they get back to Bayside, they never mention any of it ever again. Who dates a princess for a weekend and never speaks of it again? Vacation episodes often exist in a weird alternate universe—once they’re over, it’s like they never happened, like they were an elaborate, mutually imagined fantasy.

However, in some cases, major life changes happened during these travels. It seemed like this was always the case on Friends: Monica and Chandler hooked up in London, Ross blurted out Rachel’s name at his wedding to Emily during that same trip, Ross and Rachel got drunk and accidentally married in Las Vegas, and Phoebe found her birth mother while the group was at the beach in Montauk. It was a pretty safe bet than whenever they left their ridiculously huge “New York” apartments for anywhere other than the couch at Central Perk, something important would happen, which meant an extra helping of anticipation and excitement.

For the most part, sitcoms are typically risk-free zones, except on The Nanny, which is a show that I love mainly because it seemed like every other episode was a vacation episode. The writers sent Fran Fine and Mr. Sheffield overboard on their honeymoon cruise, stranding them on a deserted island. So many unexpected islands back then! For a while, as a child, I was convinced that approximately 70% of cruise ship rides ended on a deserted island.

And that wasn’t even their first dalliance with drama. In an earlier season, Fran takes a vacation with her friend Val and ends up stuck in the middle of a hurricane, and then, of course, there’s the episode where Fran goes to Paris with Mr. Sheffield, and they almost die in a plane crash on the way home. Everything always works out, because that’s the beauty of sitcom vacations: danger is just a plot device to bring people closer together, to make them realize how lucky they are to have each other and how happy they’ll be to get home.

These days, the sitcom vacation torch is being carried by Modern Family: the cast has already traveled to the requisite Hawaiian luxury palace. And Wyoming. In Hawaii, Jay deals with his fears about getting older, Haley gets drunk for the first time, Cameron teaches Mitchell how to relax (until they lose their daughter), and Phil tries to give Claire the wedding and honeymoon they couldn’t have the first time around. In Wyoming, Haley and Dylan break up (after he proposes, because proposal = vacation staple), Alex has her first kiss, Mitchell and Luke blow shit up, and Phil finally earns Jay’s respect (at least for one episode).

The Pritchett/Delgado/Dunphy travels are updates of the Tanner and co.’s: everyone either learns a lesson or realizes that things don’t always go as expected, but that they’re going to be fine just the same. (All that’s missing is an unnecessary performance by Jesse and the Rippers.) They still have the same effect on me as they did when I was a kid: that hotel! That view! That beach! I want to go to there!

Maybe it’s just me, but I feel like sitcoms don’t make vacation episodes like they used to, or maybe their ambitions are more modest, like the Parks and Recreation camping trip. I miss the dream destinations. It was 22 minutes of being somewhere else, which, I guess, is the entire point of television. It was also heartwarming to see everyone—friends, siblings, cousins, parents—together on a big trip, which is a rarity in real life. It made me happy to see everyone find time to do something special together, even if sitcom togetherness is wayyy implausible.

I suppose technology has limited the potential for the sitcom vacation. I’m not sure it would be exciting to watch Danny Tanner properly navigate the Hawaiian seas using the GPS on his iPhone or Uncle Jesse perform “Rock-a-Hula” with an Elvis hologram, asking for people to tweet #smashclubrules if they want 10% off the next show (actually no, I take that back, it would be hilarious).

And you know what? I still haven’t been to Hawaii, but you can bet that if I do go, I’ll think about Potato Chip Island. Come find me. I’ll need to talk to someone who understands the beauty in truly stupid and wonderful things. ♦