Literally the Best Thing Ever: The Black Power Mixtape 1967-1975

When you’re feeling powerless, just ask yourself, “What would Angela Davis do?”

The Black Power Mixtape 1967-1975 is Swedish filmmaker Goran Hugo Olsson’s brainchild. He unearthed obscure footage filmed by Swedish reporters in the U.S. during the black liberation movement and the Vietnam War era and breathed life into it by cutting it together with contemporary musical grooves and commentary. Olsson notes in the beginning of his film that “it does not presume to tell the whole story of the Black Power movement, but to show how it was perceived by Swedish filmmakers” who were trying to “understand and portray America through sound and image—as it really is.” And while I wasn’t there to live through that movement, weirdly, this non-American version of that moment in time feels and sounds much more balanced, thorough, and honest than most of the domestic portrayals I saw in school or on TV.

There’s footage of the author and activist Angela Davis’s unjust murder trial, a tender interview with Stokely Carmichael’s immigrant mother about her experiences with discrimination, and other stuff that shows you the soft, human, nonviolent side of these leaders of the Black Power movement—a side that’s often diluted or left out of mainstream stories that want to portray them as just angry all the time.

A few weeks ago, I found myself wandering the streets of New York en route to the hospital, sick and disoriented, with no offers of help from onlookers who just stared at my vomit-soaked dress. At the hospital, I saw stretchers lining hallways like cars in congested traffic, and people begging for blankets and food. I was filled with anger that I live in a country with so much abundance, but so little compassion for human dignity. As soon as I got home I grabbed my Pedialyte and applesauce and sat down to watch The Black Power Mixtape on Netflix Instant. (OK, I watched a few episodes of America’s Next Top Model: British Invasion first.) The movie reminded me that even though we’ve come a long way since 1975, the American Dream of equality still hasn’t come to pass.

Afterward, I stared for a while at this adorable picture of my parents, who were married in a Black Power-inspired wedding in 1974. Their wedding album is full of brightly colored clothing, huge afros, and headwraps. 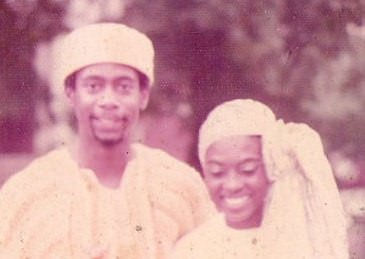 The Black Power Mixtape gave me a new appreciation of what my parents and their generation went through and how they fought racism so hard so that I could have more rights today. The movie made their struggles and their principles feel so real and immediate that I started to cry. I wonder if my hypothetical future children will ever feel that way about the activism that I’m doing today.

Even though it depresses me that racism still exists and that a lot of the social problems shown in this movie are still around, The Black Power Mixtape fills me with hope about what can and will happen when the Black Power message ALL POWER TO THE PEOPLE comes true.