Literally the Best Thing Ever: Madonna

She taught me almost everything I thought I needed to know about being a girl. 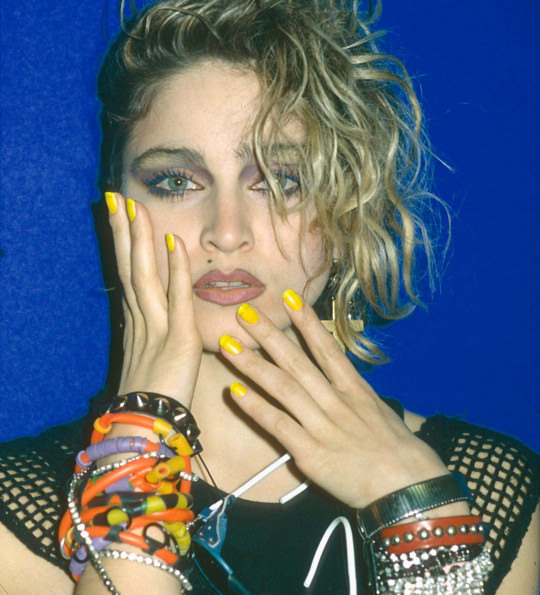 OK, here’s the thing about Her Madgesty, and I’m going to be straight with you: I don’t love the Madonna of today. I tolerate her the way I might tolerate a beloved friend from kindergarten who became someone unrecognizable in high school. The Madonna of 2012 is too big, too powerful, too inscrutable to identify with in any real way. At 53, she’s been a household name for nearly 30 years, ever since her self-titled debut album dropped in 1983. She’s sold an estimated 300 million records worldwide and toured almost every inch of the globe. She owns multiple gargantuan houses in multiple cosmopolitan cities. She has married and divorced more than one hot famous guy. She’s become a mother to four adorable kids. And she has a superhuman physique. Honestly, can anyone who’s not, like, Gwyneth Paltrow relate to her?

But I’m 35 (going on 16), and growing up in the ’80s, I was her most ardent supporter and fan. (No, I was.) To me, Madonna was everything. I first heard the Material Girl on the radio when I was six and riding in the backseat of my grandmother’s car—it was the amazeballs classic “Borderline.” I was instantly smitten with her voice and the bubblegum-goodness of the song. My fixation deepened when I saw the video for “Lucky Star” on MTV. (She was one of the first artists to embrace the then-new medium. Watch the plucky upstart defend its legitimacy, putting the smackdown on a dismissive John Oates in this clip.) She was cool-looking, cool-sounding, smart, ballsy, brave, and utterly unlike any other woman I’d ever encountered. I immediately began wearing black lace gloves, neon accents, and a hair rag. (Yes, that’s me.)

For me, vintage Madonna is, in some ways, the only version of Madge that truly matters. Not because she didn’t go on to have an incredibly influential career, but because the Madonna of that era reminds me most of my childhood, when I was still slowly piecing together my identity and actively looking for female role models to help fill in the gaps. The Madonna of those years encapsulated everything I wanted and hoped womanhood would be—exciting, spunky, bold, colorful, brave, and rebellious. Here are five reasons why she is literally the best thing ever—in her own (youthful) words, as the madly egotistical Queen of Pop would surely want it.

To me, the absolute coolest thing about Madonna is the fact that she achieved the goal she set out to accomplish. And this wasn’t, like, an easy-peasy, write-some-music, make-some-money-type goal we’re talking about. Before America’s mass-market New Age minions began talking about setting intentions, the law of attraction, or The Secret, Madonna was laying her dreams on the table in no uncertain terms. Interviewed on the TV show American Bandstand in 1984, host Dick Clark asked the then-25-year-old star her ultimate ambition. Her response? To rule the world. And she pretty much went on to do just that.

When Madonna barreled into the pop music scene, I was a timid kid, the kind who had to be forced (no, seriously, forced) to say hello to family friends or (gasp) peck an aunt on the cheek. Where I was painfully self-conscious and afraid of the world, Madonna was the opposite: brash, outspoken, and refreshingly unapologetic about who she was. (In an infamous 1994 interview on the Late Show with David Letterman, she uttered the word “fuck” 13 times in 20 minutes. Yes, she was playing the provocateur, but also challenging the PR-whiffery of the talk show format, and it was probably one of the most memorable guest appearances in history.) She never worried about winning people’s approval, which was a radical notion for me, especially when I was younger. In 1982, she finagled her way in to the hospital room of Sire Records’ head honcho, Seymour Stein, who was recovering from a heart complication, and wowed him enough that he signed her on the spot. Ballsy! I couldn’t even convince my mom to let me stay over at my friend Annie’s house! (Though, to be fair, her resistance was largely my fault: I had a bizarre, extreme fear of getting sick at someone else’s house and subsequently being trapped there, unable to get home to the safety of my own bed, an anxiety that Madonna probably didn’t share.) 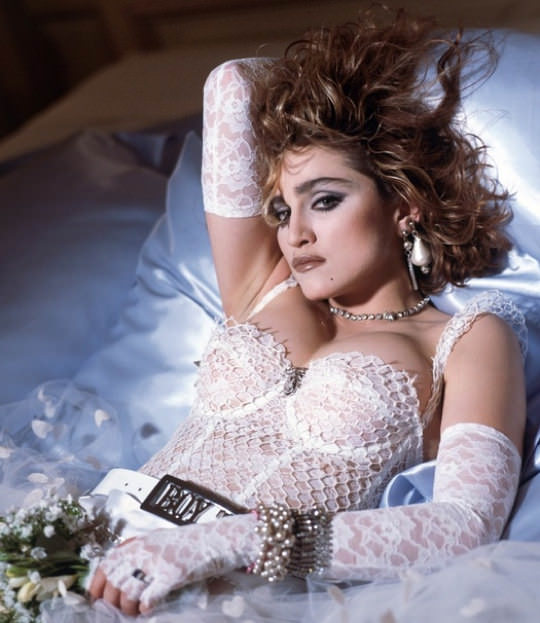 Madonna is most famous for her music, but she’s notorious for her sexual brazeness. Throughout the ’80s and ’90s, she tried on a zillion different naughty costumes and sung about various kinds of left-of-center sexual play, suggestively licking milk out of a saucer on the floor in “Express Yourself” and wielding a riding crop in “Erotica.” She bragged about her undiscerning sexual appetite, and bragging about it seemed to be half the fun. (In her 1992 book Sex, she wrote, “One of the best experiences I ever had was with a teenage boy. I think he was a virgin.”) For this reason, some critics dismissed her as a disposable pop star exploiting her sex appeal to climb to the top. Others thought she was a great example of sexual empowerment—in 1990, feminist writer/critic Camille Paglia called her “the future of feminism.” Madonna herself was adamant that her dramatic sexual whims and offerings were 100% authentic. In a 1990 Nightline interview with Forrest Sawyer, she said, “I may be dressing like the typical bimbo, whatever, but I’m in charge. I’m in charge of my fantasies…Isn’t that what feminism is all about?” It was precisely this controversy that drew me to her. Despite her tendency toward lewdness, I admired her dedication to openly exploring her sexual urges at any cost, even when they weren’t socially acceptable. I wasn’t necessarily getting pro-sexuality messages from my mother or my friends or my teachers, so “express yourself, don’t repress yourself” and rolling around the stage and pretending to masturbate in a floofy white wedding gown while singing about being “like a virgin” made an impression.

One of the biggest brouhahas started when she kissed a statue of a black saint in the 1989 video for “Like a Prayer.” Of course, what most surprised me about this debacle wasn’t the video, which was powerful, or the kiss, which was poignant—it was the intensity of the furor surrounding the act. Really? Had our society changed so little as to be shocked by the suggestion of interracial relationships? 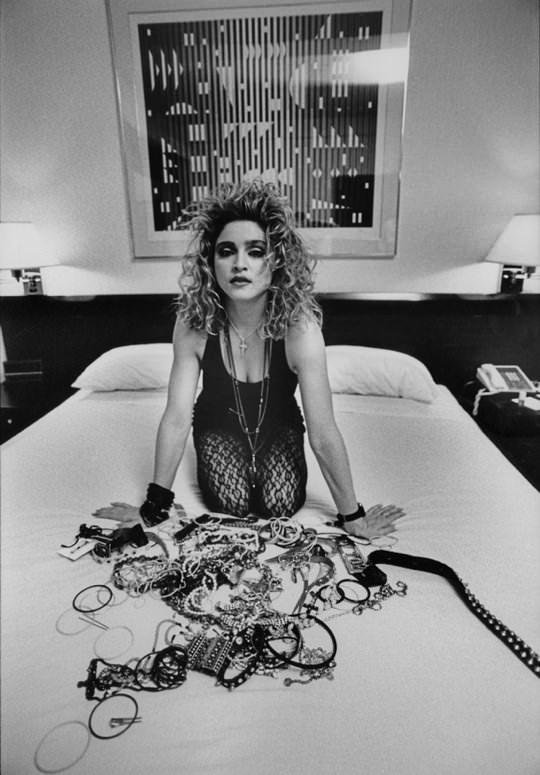 Madge’s massive fashion influence is irrefutable. Think of the looks we associate with the ’80s: neon, lace, gummy bracelets, leggings. She made these iconic. One of the first things I loved about Madonna when I saw her videos on MTV was her style. She was gorgeous, obviously, but she also looked like the coolest girl you could possibly imagine, the kind of woman you’d see at a record store and want to stealthily follow around, gaping in awe, wondering how she managed to put it all together. She vaguely resembled a Lower East Side street punk who’d busted into her best friend’s stash of cheap cosmetics: pretty, but unrefined. Edgy. Vaguely grubby. She didn’t shave her armpits. Her bleached tangle of hair had roots nearly down to her nose. She had a body that looked healthy (which she advertised in this HEALTHY half-shirt). Of course, she went on to change her image so dramatically and frequently that it could give a person whiplash, and I mean that in the best possible way. Part of her deal included borrowing the looks of other iconic women, which in some cases meant introducing me to them for the first time (see her Marilyn Monroe getup in the “Material Girl” video, or her Marlene Dietrich ensemble for the Girlie Show tour). She could rock something as impractical as the Gaultier cone bra or just switch to being a brunette (the “Like a Prayer” video), and it felt like a statement. She taught me to be fearless when it came to fashion, to play around with my style, to not take it too seriously, and to always dress for myself—not for anyone else. To this day, I have a penchant for colorful, quirky looks with a dash of punk appeal (though I still prefer cotton bras).

How do I begin to tackle Madonna’s crazy-diverse and crazy-awesome discography? She’s released 12 studio albums over the years, as well as a host of soundtracks and remixes. She has managed to stay relevant, if not ahead of the curve—and as a result, she was sometimes accused of exploiting subcultures for her own gain. (Her 1990 hit single “Vogue” was entirely inspired by the underground Harlem ball culture of the time.) It’s impossible for me to narrow down my list of favorite Madge songs. There was 1985’s sad, sweet ballad “Crazy for You,” a tune that helped shape my ideas about what young love looked like and how fervent, passionate, and over-the-top amazing it would surely be. I imagined slow-dancing, faces touching, gazing into each other’s eyes. (Of course, I had no clue about what it would truly entail: bumping eyeglasses while kissing was definitely not part of my plan, and our eventual breakup was as excruciating as getting my fingernails methodically ripped out.) And what about her controversial 1986 hit “Papa Don’t Preach”? OMG. Too good for words, and I later appreciated how it sensitively covered timely issues (teen pregnancy, abortion) without, well, preaching about them (at the time, I thought the “baby” in question was her BF). But if I absolutely had to choose one favorite, I’d opt for the under-appreciated single “Causing a Commotion” (from the Who’s That Girl? soundtrack). It’s spunky and addictive, with a hint of darkness.

I can’t recall an era of my life that didn’t feature a Madonna song as part of the unofficial soundtrack, regardless of whether I still considered myself a “fan” at the time. For instance, by the time I got to college I didn’t love her so intensely anymore, but my mind was blown by “Ray of Light,” which was so vital and exuberant and freeing and incredibly fun to sing along to in a car. And after college, I ate up nearly every song on Music. I even went to see her, for the first and only time (so far), at Madison Square Garden.

Madonna completely changed my world. She’s always been there, at the forefront or the periphery of my consciousness, keeping me company and offering a vision of a life somehow both more free and more rigorous. She got me thinking about what it feels like for a girl (long before she wrote a song of the same name), and in some ways, I think the feminism I’d grow to embrace later in life can be traced back to her. No matter what odd incarnation she pops up in today, tomorrow, or next year, the cheeky ragamuffin I first fell in love with is still in there somewhere. I just know it. ♦

Laura Barcella is a San Francisco-based writer. She’s the editor of the anthology Madonna & Me: Women Writers on the Queen of Pop. Her second book, The End: 50 Apocalyptic Visions From Pop Culture That You Should Know About…Before It’s Too Late comes out in July.