How to Make a Zine

Zine-making isn’t about rules or knowledge; it’s about freedom and POWER.

Zines are self-published, small-circulation, often nonprofit books, papers, or websites. They usually deal with topics too controversial or niche for mainstream media, presented in an unpolished layout and unusual design. Everyone, from a major NGO to a teenager like you, can be an author (and also an editor, art director, and publisher) of a zine, and that’s part of what makes them so awesome.

There’s a whole wiki devoted to zines here. If you type “zine making” into Amazon, you’ll get 10 pages of results. But to be honest, I’ve never read a book about zine-making, and I don’t think you have to, either. For me, zine-making isn’t about rules or knowledge; it’s about freedom and (guess what?) POWER.

Zines are super powerful! They can communicate rebellious words and strong ideas. People who feel a burning need to share their energy with the world make zines, so it’s no coincidence that zine culture is often associated with some of the most energetic movements: punk, feminist, queer, etc. Some publications that sprang from those subcultures, like the punk fanzine Chainsaw, enjoyed cult status; others, like Bitch, got so popular that they turned into regular magazines that you can find in bookstores.

But zine-making has always been about being a nerd, too. Someone who creates a zine has become obsessed with a subject so small and niche and bizarre that there isn’t even a magazine for people obsessed with it: a celebrity who’s seen better times; pulp science fiction; games; or something so weird you can’t imagine more than one person being into it. Zines are not looking for a broad audience. They’re not supposed to appeal to everyone. That’s the point: they’re exclusive. And “exclusive” can mean anything from “anyone interested in Doctor Who” to “only you and your girl gang” to even “only you.”

Nowadays (boy I sound old all of a sudden) you can make a digital zine/mag and reach people on the other end of the planet in a blink, but what’s nicer than a little handmade book you can hold in your non-virtual hands? Or the unique feeling of being one among a tiny group of special people in possession of a carefully made publication?

There are tons of ways to make a zine, of course. But the one I’m going to show you is one of the cheapest, quickest, and easiest—perfect for spreading your message widely! You will need only three items (that you certainly own) to make it, plus a one-sided printer to make copies. 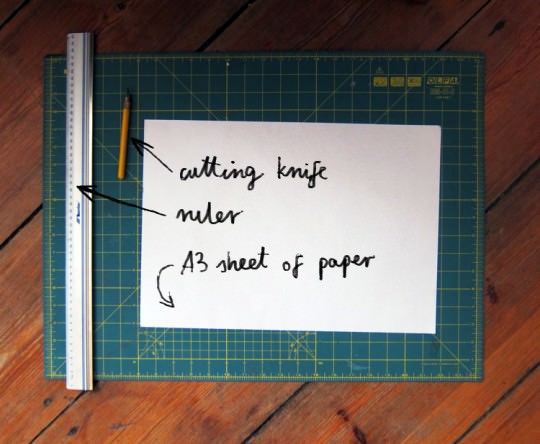 You will NOT need:

None of that junk is necessary!

How to make your zine:

1. Fold the paper in half so that the two longer edges line up. 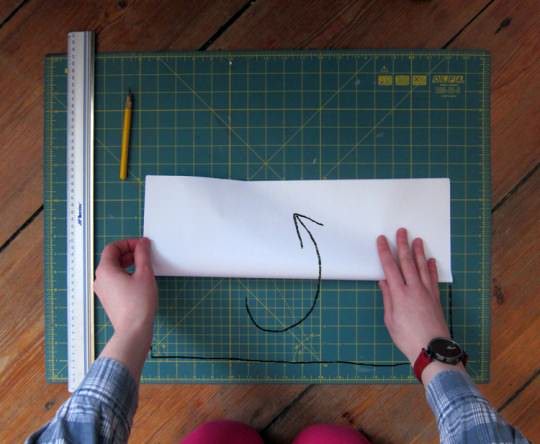 2. Fold it again the other way, so that the two shorter edges line up. 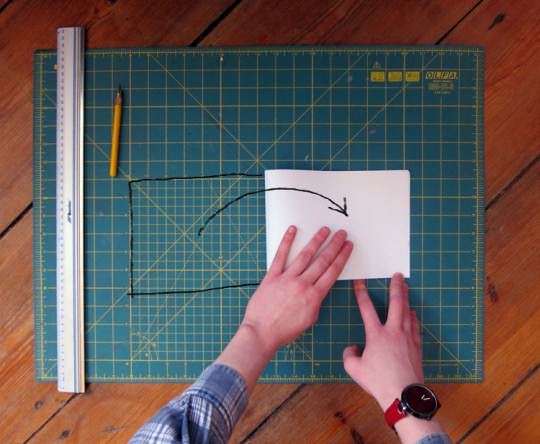 3. Fold it one last time, in the same direction as you did in step two, so that it’s the size of a standard postcard. 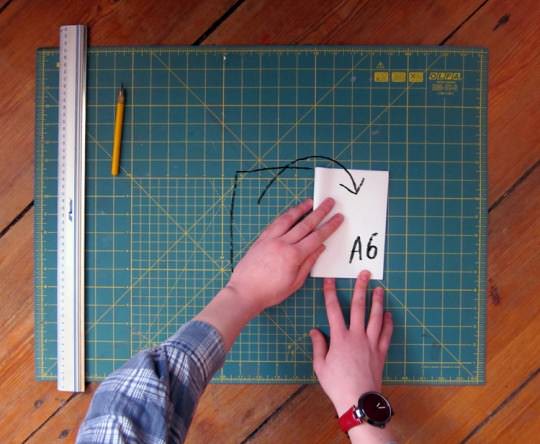 4. Unfold the paper. In the picture below I’ve mapped out where on the paper the different pages of your zine will live, as long as you’ve folded the paper the way I’ve laid out here. (It’s OK if you folded it some other way, but this map of pages won’t be the same for you.) 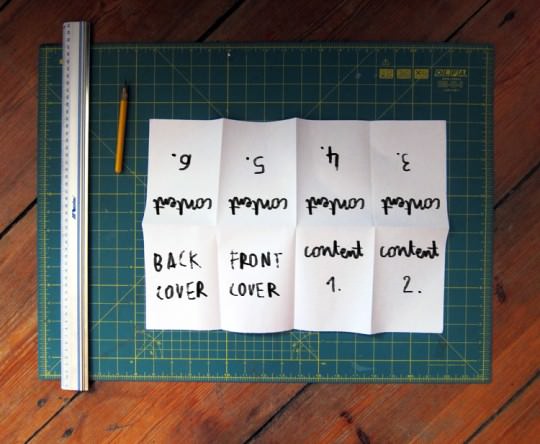 5. Cut a slit in the paper, lengthwise between the two outer folds (the pictures below do a better job of describing this than words ever could). 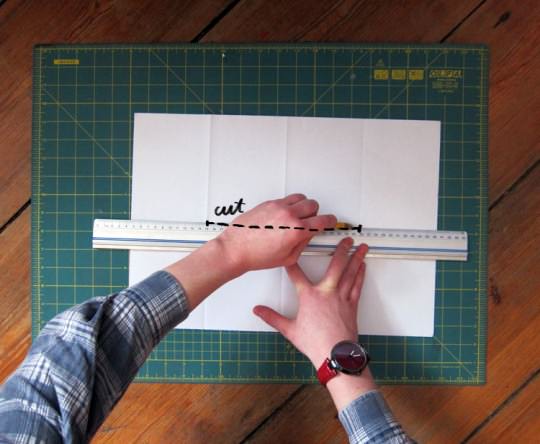 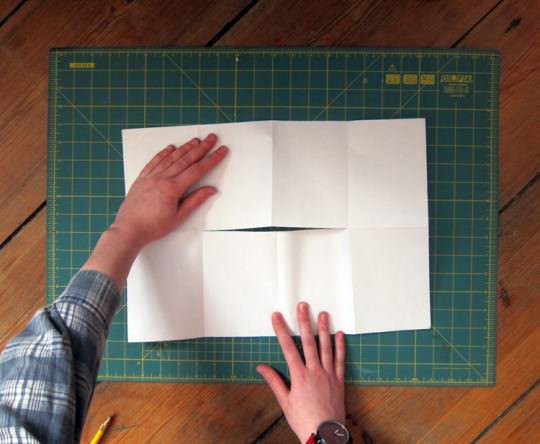 6. Fold the paper along that same line, bringing the two longer edges of the paper together. 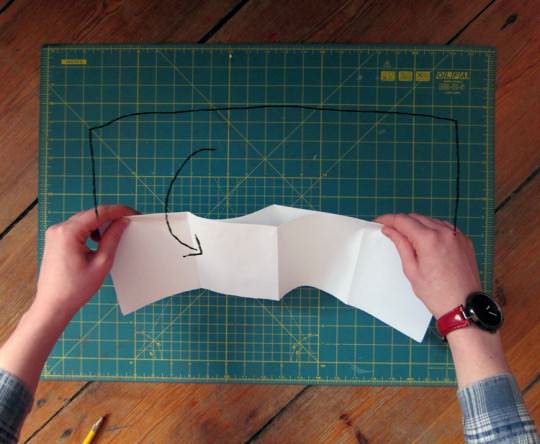 7. Grab the two sides of the paper and push them together to form a cross, like so: 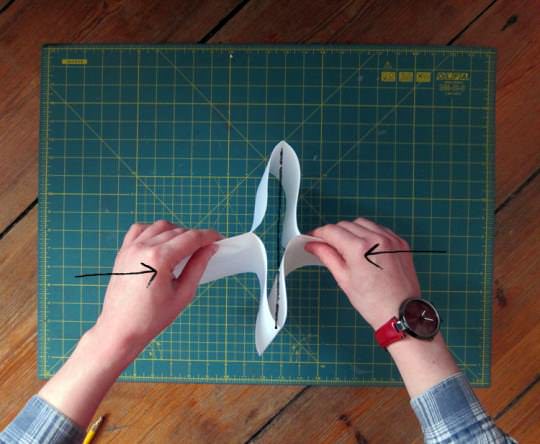 8. Take the top and bottom legs (arms?) of that cross and fold them over so they sandwich the arm (leg?) on the right. 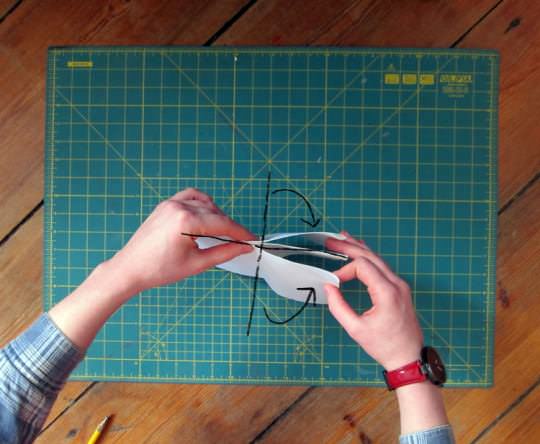 9. See that last double page that’s sticking out on the left? Fold it over the top of the other pages (you’ll move it clockwise, as shown below). 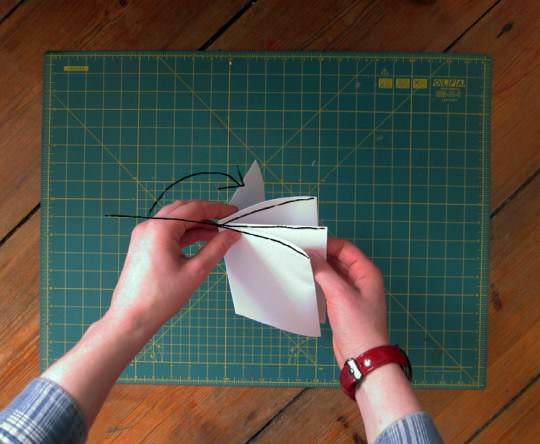 10. Flatten the zine by creasing the edges with your finger. It’s almost ready! 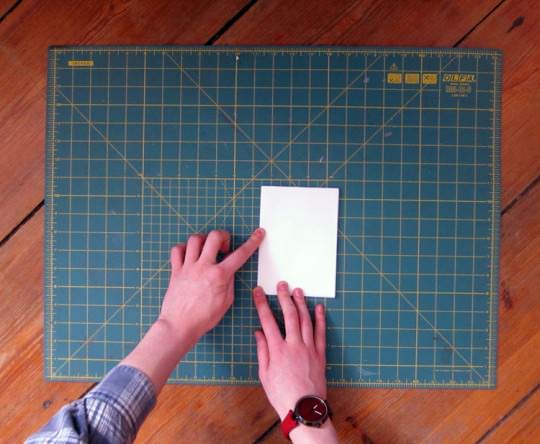 11. Now you can start working on the art and the rest of the content. This is one of my zines, inspired by old punk/feminist zines that were made from newspaper cutouts (it’ll look really cool when I Xerox it in black and white!): 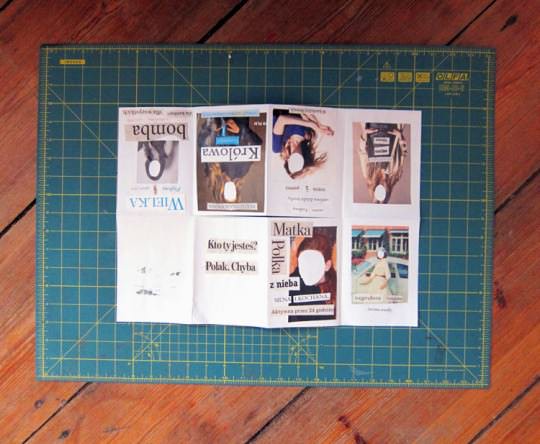 12. As you probably noticed, all the pages are double, giving them a blank inside layer—that’s because we only used one side of the original sheet of paper. You can add secret notes in the “hidden pages” that are different for every copy of your zine. 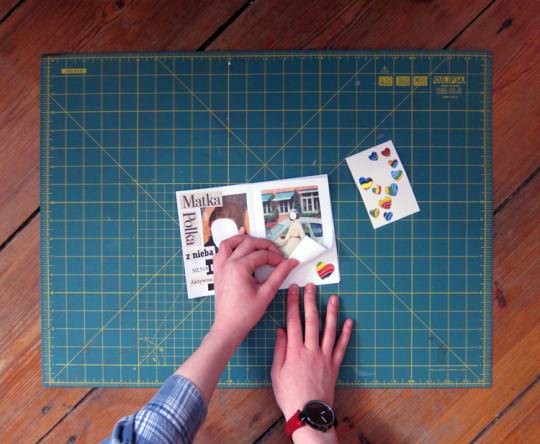 That’s it! You’re now an independent publisher. Congratulations! For more inspiration, I suggest you check out publishers such as POGOBOOKS, Café Royal, BOLO, and Nieves, all of whom are doing a great job navigating zine lovers through the sea of boring stuff flooding the internet, and plucking out only the very best for your enjoyment. ♦