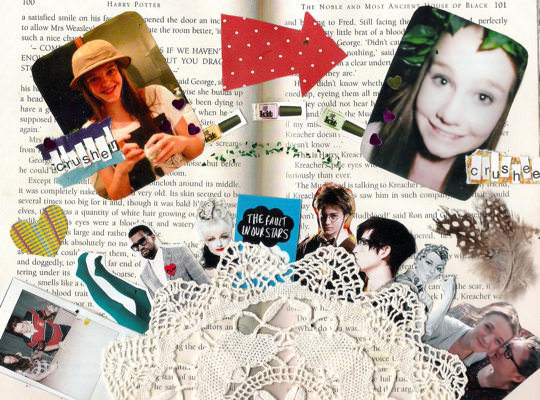 Collage by Megan, who sent us this on a crafting whim.

Every day Megan and Aisling (pronounced Ash-ling), both 18, drive an hour and a half from Perth to the University of Western Australia together, often listening to this song, and never tiring of each other’s company. In order to understand what makes their friendship work, it reeeaaally helps to be conversant in Harry Potter.

The reasons I love Aisling are endless. We went to high school together and basically became friends in the final couple of years, bonding mainly through fighting with our religion teacher about how archaic and sexist the Catholic Church is, a love of reading, and just generally feeling passionate about the same things. We drive an hour and a half to uni every day, and she never fails to make the trek great, usually by playing our favourite music over and over and over: “Scar” by Missy Higgins, “Hey Mamma” by Kanye West, “Caught in the Crowd” by Kate Miller-Hiedke, and everything by Washington.

Aisling has lots of other good friends, and I do too, but she’s truly one in a gazillion, I promise. The BEST. She is incredibly intelligent in this way that is somehow self-assured yet not at all arrogant. She’s 100% HILARIOUS (maybe just to me, but whatever). She’s really beautiful and has absolutely no idea! Her hair colour is literally called Hypnotic Red and is literally hypnotic. She’s unfailingly honest and absolutely true to what she believes in. She’s independent and strong and manages to see the good in every situation. She has a way of making you super, super excited about anything and everything. She is the kind of friend who leads you to things like Rookie.

WHERE DO YOU EVEN FIND PEOPLE LIKE THIS? I could go on. This is almost dangerous. I’m really glad I got the chance to tell you about her and also channel my midnight craft-urge into a handy collage that artistically compliments my friend-lovin’ rant.

ROOKIE: What was your first impression of Aisling?

MEGAN [crusher]: I always thought she was pretty cool. We knew each other for the first three years of high school. She was in the cool group of girls, and I was quite self-conscious. I was a bit overweight, and I wasn’t at a stage where I was confident in my abilities and knowledge to have that not be a concern.

How did you end up becoming inseparable?

It’s hard to pinpoint. We were always friends, but we became really good friends at the end of year 11 because we had every single class together, and we both loved arguing with our religion teacher.

What did you argue with him about?

We used to fight mainly about the way women were treated in the Catholic Church. We would always ask, “What if I wanted to be a priest?” That wasn’t either of our ambitions, but we’re like, “We’re educated, we’re getting really good marks, why couldn’t we be priests?”

From your collage, I’m guessing that you are both big fans of Harry Potter?

We unashamedly love Harry Potter. I once told Aisling that she was like Dobby the House-Elf, which she really hated, but I stand by it. Because Dobby always says, like, “Oh, I’m not that great,” but at the end he will be the one that saves your life—like a secret, really-great-at-everything character.

Oh. So how did she make you love books more than you did before?

The whole thing about reading books is that you realize that these characters have feelings and experiences similar to your own. It’s kind of like realizing that you’re not alone. And reading them with Aisling means I’m doubly not alone. Whenever I read the books that she already read, I always fold the pages of my favorite quotes, and then she goes back through and reads the page and tries to guess what it was. She started a book club for me and my friends recently. We read Tuesdays With Morrie, Extremely Loud and Incredibly Close, and The Fault in Our Stars. Next we’re reading A Visit From the Goon Squad.

What’s the best piece of advice she’s given you?

Her advice usually means realizing things that I already knew myself. I have a boyfriend now, but before that, I had a few questionable crushes. She told me that Adam was an idiot, and she was right. Adam was an idiot.

She’s borderline obsessive-compulsive about certain things, like having her books and her DVDs all in the right place and having her posters lined up on the wall perfectly. Also, she’s a bit of a crazy cat lady. 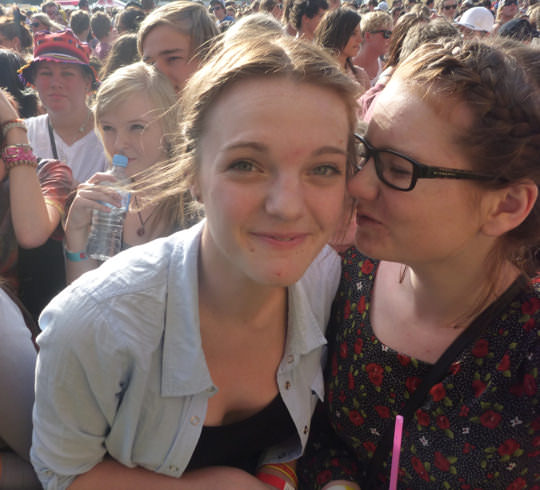 Megan and Aisling at a festival, waiting for Washington.

What makes her different from and better than other friends?

She’s very fierce and not in an aggressive way, but she stands up for what she believes in, and she won’t be swayed by what other people think. And it doesn’t matter what we’re doing. Whenever I’m bored, I drive over to Aisling’s and lie on her bed and watch My So-Called Life or paint our nails. And she is definitely the type to lead me to things. She discovered Rookie.

Nice! So I have no idea who Missy Higgins is. Should I?

Did you say daggy?

When did you realize you’d gone from being friends to being best friends?

There was this one time about a year ago where I’d been talking to Aisling about our older sisters during one of our giant, repetitive conversations, and I just remember that I dropped her off at home, and I drove out of her driveway and thought: I am so lucky to have a friend like Aisling. I realized I didn’t know what I would do without her.

When I talk to Aisling, what should I ask her?

Ask her about latest crush.

ROOKIE: How did you react when Megan told you that she had nominated you for Friend Crush?

AISLING [crushee]: I basically freaked out and spent the whole day being excited about it. I still can’t believe it.

So how many cats do you have?

I actually don’t have any cats. I just really like them. Did she call me a crazy cat lady?!

She did. She also told me to ask you about your latest crush?

Oh my god. What a bitch! [Laughs.] It’s not a good situation. It’s a boy that I work with who has a girlfriend. Nothing’s happened, but we admitted that we liked each other.

What was your first impression of Megan?

In our first year of high school, I had a best friend who was in all of Megan’s classes. And I remember my friend telling me that she was this totally smart, studious person, and my friend copied all of her work. So my first impression was that she was a super genius and all the teachers loved her. But Megan is just an incredible person. It’s so ironic that she nominated me for this because everyone we know idolizes her. She is revered among our friends.

Why do they idolize her?

She’s Megan! She’s just, like, so nice to everybody. She’s so ridiculously good at everything. In high school, she made these pencil cases for all of our friends, and you could tell she picked out a fabric that was right for each of them. And she and her boyfriend painted the Ravenclaw symbol from Harry Potter on my wall for me. And she used to do this thing where she gave all of her friends a spirit animal.

What was your spirit animal?

Well, that’s the thing, I never got one! It’s bullshit. Apparently it’s this long process where she ponders it for weeks and weeks and weeks, and it was too difficult for her to pick one for me. [Editor’s note: Megan has since decided that Aisling would be “a little bit cat, a little bit owl, and a little bit some sort of tiny, cute primate.”]

Do you recall when you went from being just friends to being inseparable?

That’s really hard. I remember the summer before year 12, it was the week before Australia Day, and she was like, “Hey, Aisling, I really miss you, and I want you to come camping with us.” I am not an outdoorsy person, but I remember thinking, “Oh my god, Megan Ansell wants to hang out with me.”

Do I have to pick just one thing?

She had a few for you.

I don’t know, we’re weird in similar ways. She’s the kind of person that I can leave a club with and go to a board game café, which is a true thing that actually happened. We were at this dirty, bogan, horrible club—do you know what bogan means?

No! But I do know what daggy means.

It’s basically, like, trashy. So we left and went to this board-game café, where people come over and recommend board games and teach you how to play them. There’s this one called Backwards that I love because I’m really, really good at it. I just gloat the entire time. I’m a highly competitive person.

I did not know such a place existed! So Megan told me you do NOT like to be compared to Dobby?

Apparently, it’s a compliment. I mean, I love Dobby as much as the next person, but really, do you want to be him? I think we said Megan was Dumbledore, which gives you an idea of how we think of her.

You don’t know who Dumbledore is? Even if you haven’t read Harry Potter, that’s an outrage. He’s Harry’s mentor! He’s like the only man who Voldemort ever feared.

That doesn’t help! So what’s the best advice that Megan’s ever given you?

If I’m ever getting really worked up about something, she’ll look me dead in the eye and say, “Aisling, remember: you are a child of the universe.” I think it’s from a poem. And then I stop freaking out and just start laughing. ♦

To nominate your buddy for a future Friend Crush, please send ONE email with your names, ages, and pictures, and a paragraph or two explaining what’s so freaking great about her, to [email protected], and write Friend Crush in the subject line.