How to look like a pop-punk vixen from the video age.

The 1980s were an adventurous time for eye makeup. Take two of our favorite pop-punk princesses of the era, Siouxsie Sioux (of Siouxsie and the Banshees) and Bow Wow Wow’s Annabella Lwin. They both got super creative with liners and shadows in wild colors and shapes, and it just made them look powerful and awesome. You can copy their looks pretty easily, too. Let’s go. 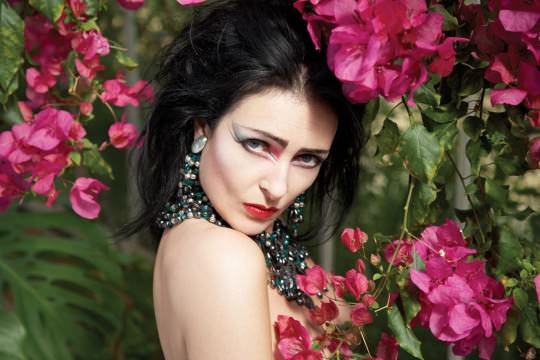 1. SIOUXSIE SIOUX She was the leader of Siouxsie and the Banshees and of the Creatures, and her wicked, sharp, funny, provocative music would influence artists as different as Jeff Buckley and Shirley Manson (which is to say, really different!). Her look has been equally influential—you can see shades of her bondage-inspired clothes and sharp geometric makeup in basically any fashion magazine you happen to pick up. Here’s my take on her more recent, more colorful look, seen above:

I used separate brushes for:

2. ANNABELLA LWIN In 1980 Malcolm McLaren (who was also an early supporter of Siouxsie’s) heard a 14-year-old girl singing along to a Stevie Wonder song at the dry cleaner where she worked, and picked her to lead the New Wave band he was putting together. That band, Bow Wow Wow, recorded only three albums, but you can still hear their songs on the Marie Antoinette soundtrack and detect Annabella’s influence on singers like Gwen Stefani and Santigold.

I copied Annabella’s makeup from the video for “Do You Wanna Hold Me” when I did Paula’s makeup for the prom shoot we posted last week: 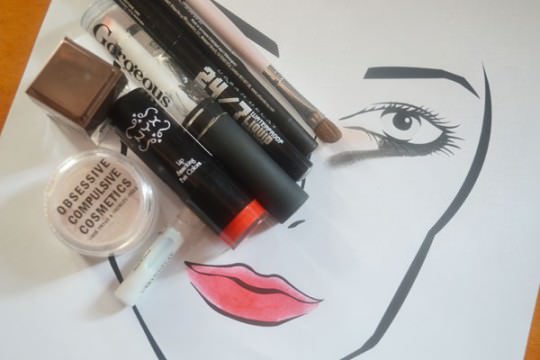 • Obsessive Compulsive Cosmetics Loose Colour Concetrate in Platonic (For Paula, I used this instead, in IV-04—it suited her golden skin tone more because of the gold flecks. I’m more pink-toned, so I used a pink-based shimmery shadow.)
• Physicians Formula Shimmer Strips Custom Eye Enhancing Gel CreamLiner in black
• Urban Decay’s 24/7 Waterproof Liquid Eyeliner in Perversion
• Urban Decay 24/7 Glide-On Eye Pencil in Perversion (This is the blackest black eyeliner I’ve used. I think the most important liner for this look is the liquid, though.)
• NYX Round Lipstick in Femme (On Paula, I used her own NARS lipstick. They are both orangey reds.)
• Gorgeous Cosmetics Glitz Fix (This is just to make the loose shadow adhere better—if you use a pressed shadow you don’t need this.)
• eyeliner brush
• eye shadow brush
• false lashes (totally optional)
• Q-tips and makeup remover (MOST CERTAINLY NOT OPTIONAL)

Yes, I used three liners for this look! Mostly because I wanted the fine edge that liquid offers, but didn’t want to waste my liquid liner, so I filled in the outline with gel and went over it with a pencil. I drew the outline in pencil, then layered liquid on top of that. 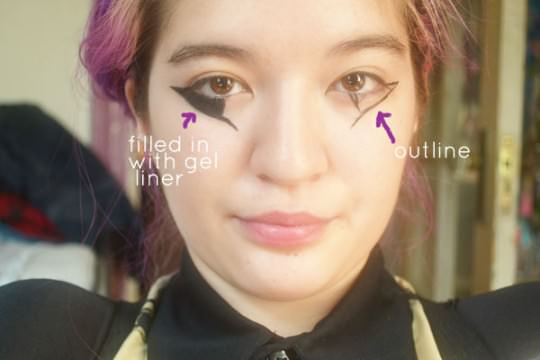 Step One
Make your outline! This is the part that takes the longest. I futzed around for ages with mine, and in the end I wiped half of it off and it looked much better! This look is very angular, and to pull it off you need to figure out what shape works best for you and how far to bring it down on your face. Take your time with this!

I did it two ways here: first, with the method I used on Paula (the super-exaggerated version), but on my face that looked weird. The second way, I wiped off the pointy ends and changed the shape a little to suit my eye shape better. Experiment with your pencil liner to figure out what shape works best for you. 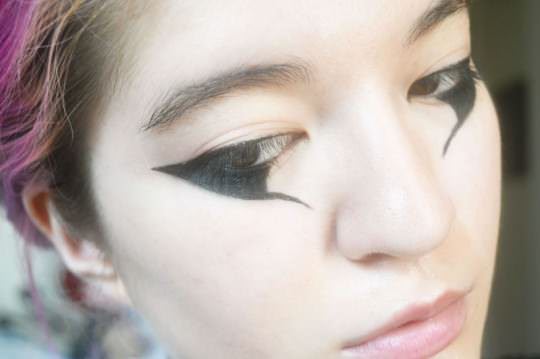 Step Two
Now that you have settled on an outline for both eyes, fill it in with gel liner, then go over the patchy spots with your pencil.

Step Three
Run your liquid liner over the edges so they look extra sharp. I decided to do a little cat-eye on my upper lash line to unify the look, because it was really bottom heavy on me (here’s a cat-eye tutorial I did back in November, if you need help). I connected the edges on the top cat eye with the bottom situation so it didn’t look discombobulated. I didn’t do this part on Paula—I just put mascara on. 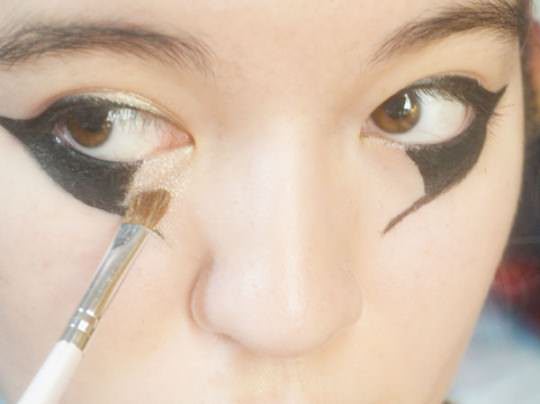 Step Four
Fill in the blank part under your eye with the shadow of your choice. I suggest a neutral shade like the shimmery cream I used, because this look is pretty bold already. 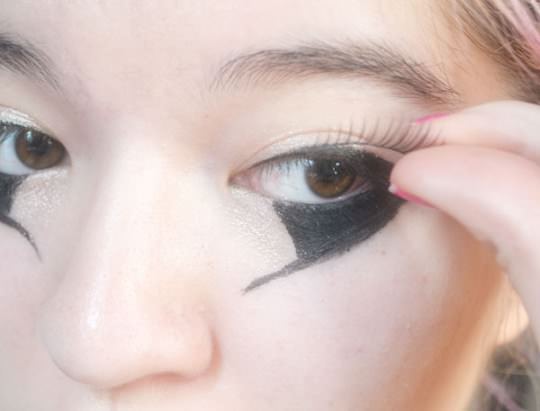 Step Five
This is completely optional, but if you want to, you can add false lashes. I didn’t do this on Paula, but I did on myself. Here’s a false-lashes tutorial from Amy Rose. 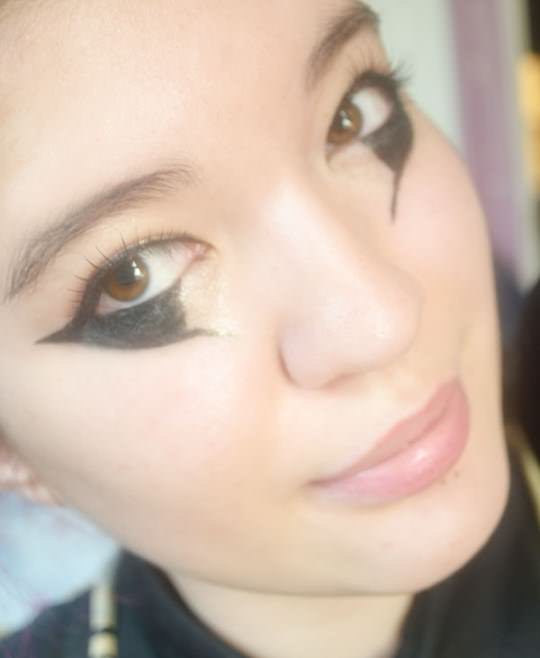 Step Six
This was the same shape I did on Paula, but I didn’t really like it on me, so I dabbed a Q-tip in makeup remover and swiped off the dagger points, then curved the liner to mimic my eye shape: 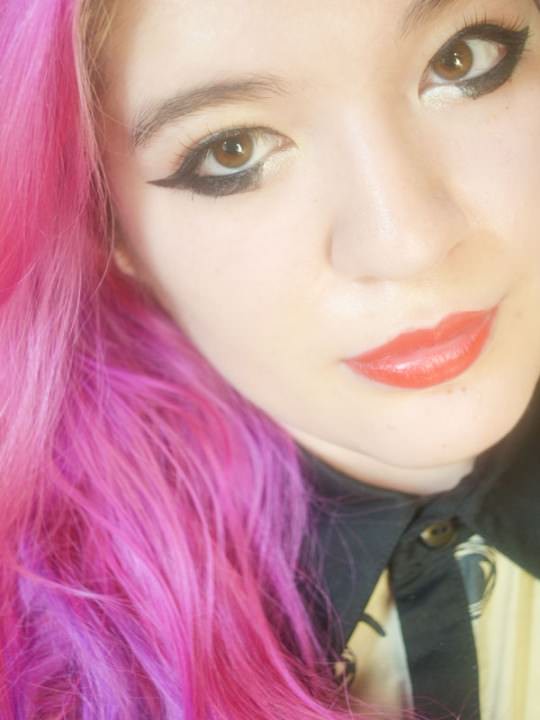 Off topic, my camera lens was really dirty, so it makes all these photos look really dreamy. I’m not complaining. ♦