By Far the Best Article Ever Posted on Rookie

I’m trying to allow myself to accept that it’s awesome to be competitive sometimes, but not about everything, all the time, what is sleep I’m too busy trying to beat my own high score on Angry Birds yet again aaaaaaaaah WHY AM I NOT GOOD ENOUGH. 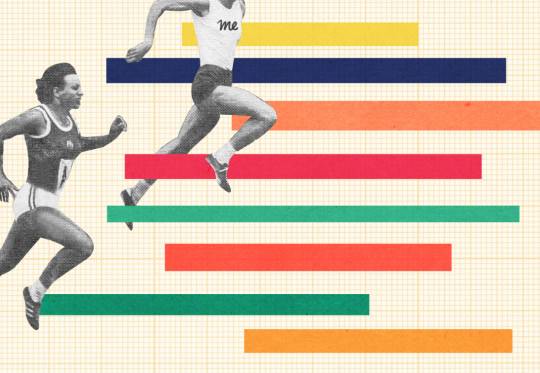 I am a really competitive person. I apply a competitive mindset not only to the big stuff, like my GPA and my jobs, but also to seemingly inconsequential things, like being the very best possible gift-giver or Twitterer or Scrabble player. In fact, most of my friends know not to play any board game with me unless they’re prepared to go hard in the paint.

A few weeks ago, my boyfriend, one of our friends, and I were having a “casual” game night in my living room. We started out dealing hands of Uno, which is still my favorite card game of all time, despite the face that I am now old enough to legally gamble, because I am a really cool, mature person. After I lost three rounds, I insisted we move on to something else, snottily explaining to the guys that Uno didn’t really take any skill or strategy (even though it clearly does, because otherwise it wouldn’t be my favorite). Instead, I pulled out Mastermind. It’s a two-person game in which one player sets up a row of colored pegs, which are hidden from the second player. The second player then uses the process of elimination to guess the correct order and colors of the pegs. My losing streak continued despite the game change, to my barely suppressed fury. It was just one of those nights that everyone has sometimes where you can’t seem to win at anything, and although that’s totally normal and whatever, I was NOT HAVING IT. Since board games weren’t working out for me, I suggested we try a different test of skills—namely, sliding down my long hallway on our knees to see who could get the farthest. My companions got tired of the game early on, but I tried and tried and tried to keep going, way past the point of reason. After many running starts, my knees were as bruised as my ego.

So what? you might be thinking. Why do you care so much about the fact that you didn’t win anything on some dumb game night? The answer is, I don’t know! I don’t know why I’m still thinking about an unremarkable, friendly evening that happened weeks ago! But I am, because, like I said, I’m super competitive, and as great a motivator as that can be in stuff like school and sports, it can also be a not-so-positive thing if you let it dominate your brain.

Sometimes the good aspects of this trait are inextricable from the negative ones. During the day, I work a retail position at a clothing store. I receive a commission for everything I sell, so obviously that’s a huge incentive to work really hard. But you know what? I don’t think of the extra money I make as something I’ll eventually see in my bank account—I think of my commission total as a high score that I need to strive to outdo every day that I’m working. While this helps me perform really well at what I do, it can also be unreasonable. If I don’t break a certain amount of sales during a shift, I feel like I’m losing a life in Super Mario, or falling victim to some other kind of marked setback. It’s like, if I had only been better at playing the game that I make my job into, I would have deserved the money—and impressed my manager—more. That’s another aspect of it: a lot of my competitiveness stems from an exceptional need to please other people, like my bosses—even if they don’t really care one way or the other how I do so long as I don’t come to work in pajamas. I’m always looking for special recognition, from myself and others, which isn’t always healthy. My self-esteem probably shouldn’t hinge on how many jackets I can sell in a seven-hour period, should it?

Of course, it’s more than that. My rabid need to outperform and impress extends to wanting to be every professor’s favorite student, the perfect daughter, and, in my worst moments, the hottest girl in the room. While the first two of these are acceptable (though occasionally dangerous) things to want, that last one is pretty disturbing any way you slice it. Throughout much of my life, I pretty much felt like a slime monster in terms of my own self-image and attractiveness. My insecurities caused me to compare myself with and actively resent other girls, whom I perceived as my “competition” for male attention. Ugh.

Obviously, there were more than a few things wrong with this mindset, as I learned at the age of 13, when a close friend of mine and I continually got crushes on the same people. Sometimes we would even hook up with them, one of us right after the other. Does that sound insane? Well, it was! We were constantly comparing ourselves, subtly insulting each other, and trying to have the guys corroborate our self-imposed stories of, like, WHO WAS THE BETTER KISSER or WHO WAS PRETTIER. When I got to high school, I met an all-new pool of people who didn’t compete in this way, which led me to realize that my social and romantic life didn’t have to be limited to a weird, backstabby psychodrama. My eyes were opened to the fact that no relationship, platonic or otherwise, should be a constant power struggle. I excused myself from that friendship. Even though I felt like I was “letting her win” at first, I soon felt miles better about myself.

Even though I finally saw that competing for the attention of guys would perpetuate all-around bad feelings and negativity, I still felt a sense of competition about my looks and personality for a while afterwards. The impulse to be better than anyone and everything, especially other women, is one I have to constantly try to control. That’s right, guys—I even need to compete with my own competitiveness in order to keep myself in check. OY VEY. But at least I’m trying.

The key to maintaining my competitive streak as just that, a streak, rather than a river running red with the blood of my perceived opponents, is being able to recognize that it’s unreasonable to expect perfection from myself in every realm of my life. The other day, I won two writing awards offered by my college. When I got the news, I felt a little sick, despite placing first in one of the three categories I had entered and receiving an honorable mention in another. The disappointment that I wasn’t recognized in the third category outweighed the pride I should have felt for doing well in the other two, which is an absolutely insane and ungrateful way to see that situation. No one likes the person who complains about getting an A- while others are struggling to maintain Cs, and it’s often hard for me not to be that asshole.

I’m trying to allow myself to accept that it’s awesome to be competitive sometimes, but not in reference to everything, all the time, what is sleep I’m too busy trying to beat my own high score on Angry Birds yet again aaaaaaaaah WHY AM I NOT GOOD ENOUGH. It can be really helpful to remind myself that everything I’ve accomplished is not, in fact, invalidated by the the goals I haven’t blasted through just yet, especially not the ones that have to do with pixellated wars against green pigs. Part of this is allowing myself a little bit of time to be proud of the things I’ve done before I move on to trying to demolish my next task. After all, what’s the point of working hard if you can’t enjoy the results of your efforts? When you feel like your temples are about to pop from the stress of trying to be the best at everything all the time no matter what, RELAX FOR A SECOND THERE, SPEEDY. Remember that while you can use your competitiveness as a motivator, it shouldn’t make you feel inadequate. Take a good look at everything you’ve accomplished so far, appreciate that a good sense of competition helped you get there, and realize that you can pull off more great things in the future—even if you’re not doing so in five different fields at a time while simultaneously looking super cool and executing a perfect backflip. Come on—we both know that would look a little weird, anyway. ♦