Girls are fun and awesome and let’s dress up every single day. 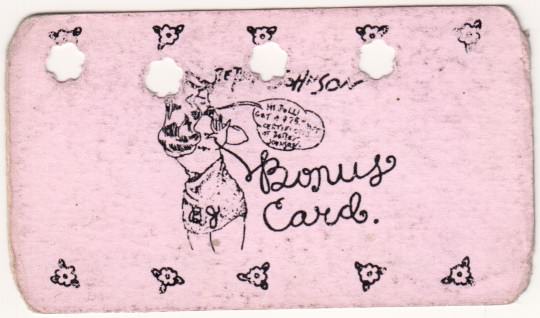 When I fell prey to that horror of adolescence—orthodontia—there was only one glittering silver lining. I don’t mean those awful, colored rubber bands, the tiny markers of a season (red and green for Christmas!), wrapped around the metal affixed to my teeth. I’m talking about the Betsey Johnson store that was exactly one block away from the dentist’s office on the Upper West Side of Manhattan. I’d been in several times before with my sweetly indulgent parents—they almost always caved when I asked for an inappropriately sexy Betsey outfit for my birthday. But when I got braces, I started going in all by myself, which felt deliciously grown-up.

It wasn’t just the flattering cut of the clothes that I loved, with the bell-shaped sleeves and the high, small waists. It was the entire philosophy, which was something along the lines of “Girls Are Fun and Awesome and Let’s Dress Up Every Single Day.” All the women who worked at Betsey were cool—black hair, tattoos, high heels, corseted waists, and hourglass bodies spilling out all over the place, which was in stark contrast to the neutral tones and boxy garments the other women in the neighborhood favored. The salesgirls enthusiastically encouraged my every outfit, and we would twirl around together, the bright cabbage roses on the wallpaper our backdrop. 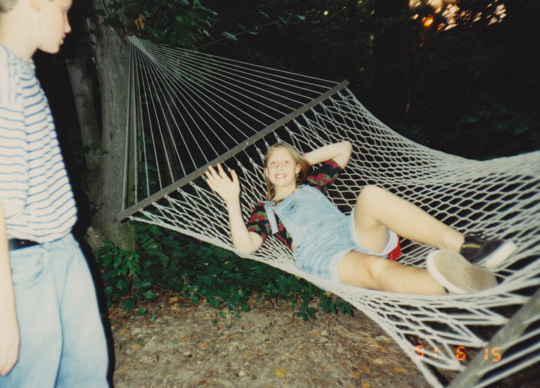 Me in my Betsey top.

I took my Betsey Johnson dresses to summer camp. I wore them to Central Park to ride the seesaw. I wore them to birthday parties, to dances—everywhere I could. I hung the tags (with large black-and-white photos of Betsey and her daughter, Lulu) on my bedroom walls. When I went to the 13th birthday party of an older friend who went to another school, I wore a choker that said “Betsey” on it. Everyone thought it was my name. I’ve rarely felt that cool or mysterious since.

When I was young, nine or 10, Betsey’s clothes made me feel sassy, or as one friend’s father described me, “spunky.” This is a gross word, but I knew what he meant—it was a little wild, a little brash, and unapologetic. Those parts of me had always existed, but Betsey brought them out even more. Her designs were the opposite of my conservative school uniform—a white polo shirt or turtleneck, navy pants or skirt, and, if you were feeling particularly kooky, some khaki. They were brightly colored, with a soupçon of sex. They were poufy and bright and snug and lacy and absolutely shot through with an electric current, at least for me. I had a jacket with skulls on it that I would KILL for today, as well as half a dozen dresses that Donna or Brenda or Kelly wore on Beverly Hills, 90210. 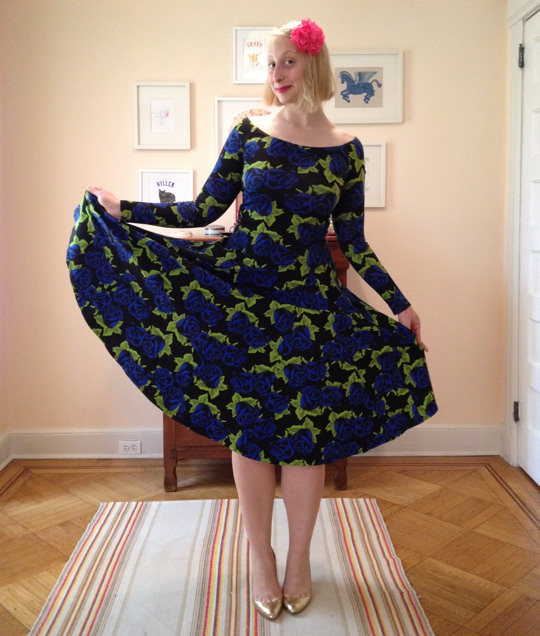 Not that I was interested in having sex at that age, mind you, but I was very interested in kissing, which felt like pretty much the same thing. Once, when I was about 11 or 12, in need of a new party dress and already a size six, one of the salesgirls told me that Cindy Crawford was a size six too, and instead of feeling like an ogre compared to my friends, the way I usually did, I felt instantly beautiful. That day I bought a forest-green lace dress that clung to my hips. I wore it at home, wrapped with a feather boa, to watch the Academy Awards with my parents. My friends wore plainer things from the Gap or Express, as did I most days of the week. Some of them dabbled a bit in Betsey, a flowered party dress here and there, but none were as full-throttle obsessed as I was. Betsey Johnson made me feel like not only was it OK for me to have curves, but that those curves gave me an edge on the competition. Hell, I was the same size as a supermodel! 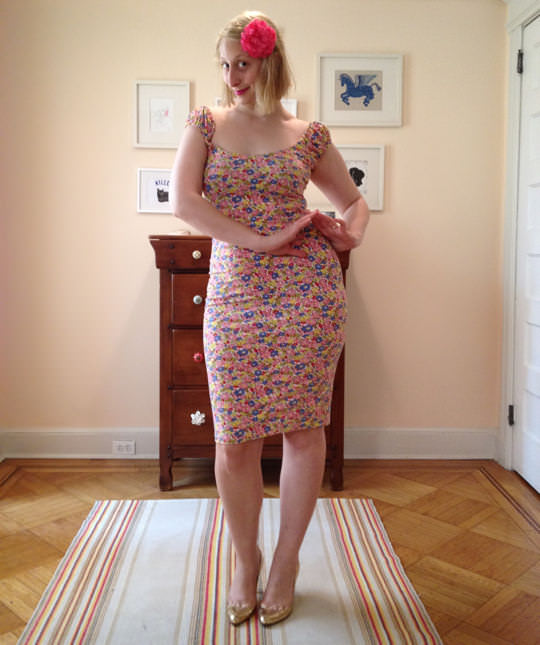 As I got older and bigger, the dresses (and skirts, and tops, and one ill-advised shorts-and-peekaboo-tank set) were a way for me to feel better, like a shot of adrenaline. One dress in particular (a white spandex number in a rosebud pattern with a lace-up front, like the St. Pauli Girl) was my go-to outfit during my college years. Whenever I was feeling low about romance, or friendships, or school, or anything at all, I would put the dress and some bright lipstick on, and I knew I would be OK. I was still larger than most of my girlfriends, if not all, but whenever I felt sad that I couldn’t share jeans with my roommate, I slinked around in the spandex, knowing that there were ways that I could fill it out that she couldn’t. Betsey didn’t care if I had big hips—she liked me that way, and her approval meant that I liked me that way, too.

When I got married, I wanted a fun dress to wear to the reception, which we held the day after the actual ceremony. I bought dress after dress, returning each one. This one was too boring, this one was too fussy. I was totally at a loss. When my husband-to-be and I went to visit his mother in Florida a couple of months before the wedding, we were walking through the mall near her house when the Betsey Johnson appeared, like an oasis in the desert. I tried on six or seven dresses, all of which made me feel like the homecoming queen. (That’s a good thing.) I bought a pale-blue-and-white one, on sale, because it reminded me of a wedding cake. As always, it was a dress made for twirling and for fun.

Here’s the sad part: I didn’t wear it. I was freaking out so much on the day of the party (late relatives, terrible hair-do, panic attack) that I chose the wrong dress. Is it strange to put it that way? I had a grown-up dress on standby in case I chickened out, a lovely Phillip Lim in the shape of a lightbulb, with a wide body that narrowed around my upper thighs. A lightbulb! It was gray—silver on a good day. I liked the fact that it was sort of white, because it was sort of my wedding, but it wasn’t nearly as much fun. I suppose I thought the Betsey dress was too young, too frivolous. I drank too much at the party and felt like I didn’t get to have a proper conversation with anyone. I looked evilly at the one friend who had dared to wear a feather in her hair as I had. I think that I was trying to be an adult, because I was 28 and had just gotten married. Really, I should have been trying to be myself. I was surrounded by everyone I loved, and they all would have taken one look at me and said, Of course. There are so few moments in life when one can walk into a room dressed like a wedding cake, and know that everyone will turn around and applaud. I can’t help thinking that I would have enjoyed myself more if I’d worn Betsey Johnson. 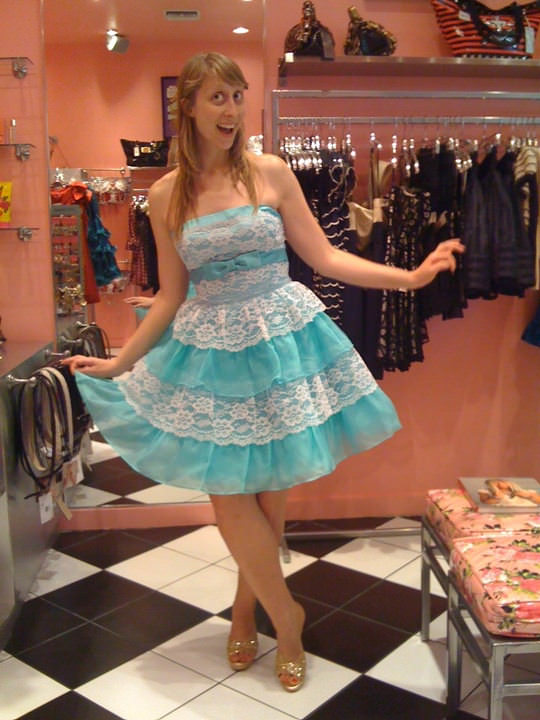 The wedding dress that wasn't.

A few days ago, I read that Betsey Johnson (the company) was bankrupt, and closing most of their 40 stores in the U.S. Betsey Johnson (the person) had sold the brand years before, maybe to spend more time at Betseyville, her compound in Mexico where I lobbied hard to honeymoon. (Really—at the time, you could rent Betsey Johnson’s house in Mexico. It was a thing.) It makes me really sad to think that young girls won’t have the same experience I did, prancing around in their sock feet while older, wiser girls cheer them on. Betsey was really special to me, as a place to go and feel powerful and sexy and gorgeous. I’m sure there are other places for teenagers to go for that today—Tumblr, say, or right here at Rookie. For me, it will always be Betsey. Someday, I’m going to do cartwheels with her on the beach in Mexico, both of us wearing lipstick and spandex and laughing our heads off. Just you wait. ♦