The awesomeness that is powering through a television series.

By Far the Best Article Ever Posted on Rookie 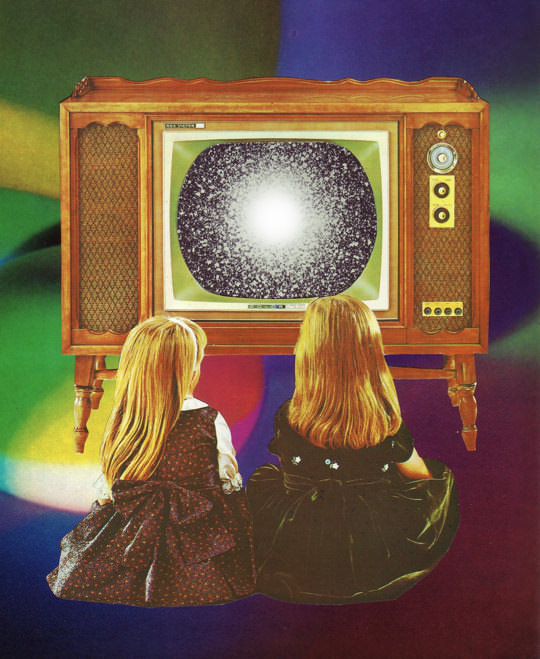 My first time was in Baltimore, surrounded by drunk cops and charismatic drug dealers. Some of my friends had put in their time before me and were already speaking in code. When I finally joined in, I went headlong, barely coming up for air, until I too was babbling at strangers about Stringer Bell, Wallace, and poor, sweet Bubbles.

I’m talking, of course, about the HBO series The Wire. Four years after its debut in 2002, my then-boyfriend (now husband) and I decided we had to know what all the fuss was about. We watched three seasons in the span of just a few weeks, powering through hour after hour in a couple of sittings, utterly rapt until we could no longer keep our eyes open. We were living in a drafty house across the street from a lake in Madison, Wisconsin, but we could have been anywhere—we spent entire days in front of the television, promising each other that each episode would be our last before bed. We moved from day to night without noticing—that’s how deeply absorbed we were in Omar Little’s seasons-long vendetta against the crew who murdered his boyfriend, Stringer’s business-savvy approach to selling drugs, and police office Jimmy McNulty’s drinking problems. What is darkness if not an optimal setting for a stakeout?

I have never been one to mete my pleasures out in a way that will make something wonderful last as long as possible. If there is a gorgeous piece of chocolate cake in front of me, it will be inside my belly in five seconds flat. If I’m in a new city, I will hit the ground running and explore the whole thing the first day, leaving me panting, exhausted, and jet-lagged. This is not the way to go through life, I tell myself. But self-discipline has no place with TV consumption. Devouring a series whole—or maybe it would be more accurate to say being consumed BY it—is one of life’s great pleasures, up there with talking to my cats, tulle, and the aforementioned cake. Of course, with the introduction of DVRs, Netflix, and DVD box sets, I may never slow down, which puts me at risk for couch sores, eyestrain, and a near lunacy when the whole thing is over. I need more, more, more.

After we watched all of The Wire, which we had to finish in real time like the once-a-week viewing plebes, we turned to HBO’s Six Feet Under (2001-2005). If The Wire was like an epic novel chronicling the practically subterranean trials of an American city in crisis, Six Feet Under was the story of an unhappy family that is unhappy in its own way, with festering wounds caused by decades of misunderstanding and neglect and love at the hands of parents and siblings. I loved the complicated, crazy Brenda Chenowith and, most of all, the ethereal, passionate Claire Fisher. I loved watching all the characters make tough decisions, fight, marry, live, and die. I loved it so much that when my wedding approached and I still had not finished the series, I brought the finale with us on our honeymoon in Mexico. That’s right—we brought a television show set in a funeral parlor on our honeymoon. That may strike you as unromantic, but only if you haven’t seen it (minor spoiler ahead). There are few perfect finales in the world, but Six Feet Under’s is one of them. I mean, we were so close to the end—how could we wait?! We watched it in our airy hotel suite and cried, cried, cried. We wept not only because it was over, but because we’d seen the future, in all of its mess and devastating glory, and we were satisfied. I still weep every time I hear this Sia song, and I can’t tell you why, because it might spoil the series, but should you watch, you will understand.

Now, it will surprise no one that I don’t know a linebacker from a quarterback, but nevertheless, I gave Friday Night Lights (2006-2011) a chance. We rented the first disc from Netflix, just to see if it lived up to the hype, and watched the pilot episode on an airplane from Brooklyn to Portland, Oregon, where I was taking my husband for his 30th birthday. By the end of that hour, we were hooked. We needed to see how the fictional town of Dillon, Texas would soldier on after Jason Street, their star quarterback, was paralyzed. We needed to know how Coach Taylor and his magnificent wife, Tami, would adjust, and which player would woo their teenage daughter, Julie. So when we landed and picked up our rental car, did we head straight for the Rose Gardens or Voodoo Doughnut? No. We drove to a Fred Meyer to buy the entire first season on DVD. We did manage to unglue ourselves from the television set in the hotel room to see the city, but watching FNL remains a memorable part of that trip. While I still don’t know anything about football except that it looks cool in montage shots, I do know more about mentoring and responsibility, about marriage and sacrifice, about friendship and how good certain boys can look in nylon stretchpants. We watched all the seasons to date as quickly as possible, and then once again suffered through the indignity of having to watch only one per week once the fourth season began. There is nothing as frustrating as watching a single episode of a show that you want to mainline.

Finally, last year, after we watched the first episode together when I was sick, my husband excused himself from sitting through the rest of the British TV show Downton Abbey with me. I watched alone for the rest of the day, taking breaks only to make cups of tea and use the bathroom. I cried, I laughed, I swooned at the dresses. It’s a drama set in a British country house in the early 20th century, with plots unfolding both upstairs, where the aristocratic Crawley family dawdle the days away, and downstairs, where the servants hustle to meet the Crawleys’ every need. This show thrilled me to no end. It reminded me of my first real period love, the BBC’s Pride and Prejudice miniseries from 1995. I’d watched those six hours by myself when I was in college, depressed and lonely and full of beer and tater tots, and it consoled me. I don’t know why, but it felt like I had company, like I was a bystander in a drama that my witnessing made me a part of. Who needs a boyfriend when you have Colin Firth as Mr. Darcy?

I’m surely not the first to say that Jane Austen made me pine for the perfect partner, but I will happily report that I think I have one: right before the second season of Downton Abbey begun, my husband gave in and watched the entire first season with me, which means that I’ve now seen it twice. I loved sitting next to him and waiting for his reaction to the Dowager Countess’s many zingers. And though I am loathe to admit it, my need to SEE MORE NOW turned me into a criminal. I couldn’t wait for each episode to air, so my husband found it online and illegally downloaded it, and we watched it, along with the Christmas special, in two giant gulps. If I’m being truly honest, I’m not sorry. The only thing that makes me a little bit sad about Downton Abbey is when I see some of the actors in their normal, 21st century clothing, and I have to deal with the fact that they do Pilates and have cell phones.

So that’s the story of how I’ve spent 229 hours of my life, with nary a mention of the words “guilty” or “pleasure.” Watching fictional characters grow and change over a period of years is something that we don’t get to do—except by reading, which I’ve tried to avoid referencing here. Yes, OK, reading tends to accomplish the same thing: huge, imaginative, complex worlds that we can lose ourselves in. But this piece is about binging on TV shows.

This is television’s so-called golden age, and the best series explore secondary plot lines, minor characters, and long-term character transformations to an extent that you truly feel like these made-up people are flesh and blood. Personally, I think that’s what makes them so enthralling in their entirety than the soapier shows that I’d loved in my youth. Beverly Hills, 90210 aired for 10 years, and though I think I’ve seen all 292 or so hours of it, I wouldn’t want to watch them all at once—there were too many missteps (Kelly in the fire, Kelly getting shot, Kelly as a cult member) to see it consecutively. By comparison, Friday Night Lights only had one clumsy subplot in an otherwise good season (Landry, I’m looking at you), which is easier to overlook in the scheme of things.

And speaking of, some wonderful shows (My So-Called Life, Veronica Mars) were canceled prematurely, but our one small consolation is that they can be watched over and over again in totality, fitting together as a singular narrative rather than an interrupted saga. I think next up might be Parenthood, which I hadn’t been interested in enough to tune in when it first aired, but I’ve seen the last season, which is pretty great. That’s the thing—sometimes a single episode just doesn’t seem worth the time. I was out that night, I was tired, I had better things to do. But then, one lazy weekend, that won’t be the case. This series is from one of the creators of Friday Night Lights, it stars Peter Krause from Six Feet Under and Lauren Graham from Gilmore Girls, and it just may be the ideal way to spend a Sunday afternoon. I’ll report back—just give me 53 hours. ♦