In It for the Fun

One big draw of being in a street gang is that you get to throw away the normal, boring story of your life and replace it with a much more dramatic story—a heroic story.

The Power Is On 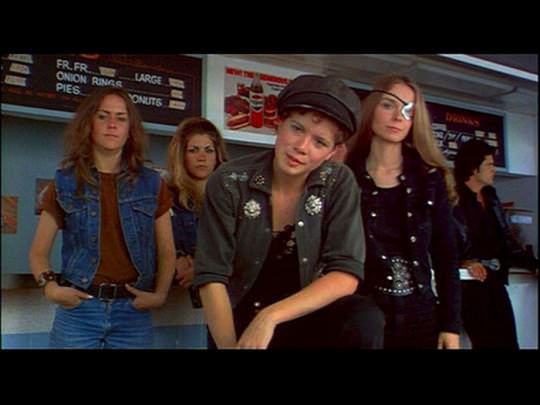 The gang from 1975's Switchblade Sisters

A bunch of years ago I was a radio reporter doing a story on girl gangs—the tough kind in Chicago where girls carried guns and sold drugs. One girl that I interviewed wanted to be sure I understood: she didn’t get into the gang because she came from some rough background. She didn’t grow up in the projects. Her parents worked. She was a “good” kid. Her teachers liked her. They were nice, responsible, get-up-and-go-to-work-even-if-you’re-dead-sick kind of people.

So why’d she join the gang? “Because it was cool!” she said. (Duh.) “Everyone was doing it.” She wasn’t in a gang because she had no other options. She was smart. She was in it for the fun.

Most of your time in a gang is doing the most normal teenage activity in the world: hanging with your friends. Teasing one another and goofing around and looking for stuff to do, for hours and hours and hours. Being around girl gangs in Chicago was like being around any group of girls. I don’t know why I didn’t expect that, but of course when you think about it, what else would it be?

Except when it came to one thing. The leaders of the groups, the ones who rose to the top, weren’t just charismatic like the top girl in any group of girls. They also really loved being tough. They loved having power.

I did a radio story about this a few years back. Click here and jump to 12:48 to hear this part of it. You may need a RealPlayer to listen; that’s here. This was part of a radio series called Soundprint, which does all kinds of stories.

“It’s a power trip,” one girl said. “It’s power. When you’re 13, and can walk down the street, and everybody looks at you like, ‘There goes the pope.’ And you could say something to someone and they wouldn’t dare—I mean not even dare to say something back? That’s a power trip. When you sit there and you’re just like: ‘Just say something.’ And they’re like: [mopey voice] ‘No, forget it.’ And they walk away. And you’re like, They know not to mess with me.”

Maybe you relate to that, maybe you don’t. I think lots of kids–hell, not just kids, lots of people everywhere–walk around with tons of anger, and this is what these girls do with it. They let it out. That same girl said: “Why is it fun to fight someone? Number one, you’re in control. Number two, if you know you’re a good fighter, it’s likely you’re going to win. I’d be like, ‘God, I’d love to smack the shit out of someone.’ And it would be because I knew there’d be somebody I could find. You just walk around, talk shit about everybody, till you spot somebody, you scope them. You say, ‘There’s my victim.’ This is a self-esteem booster.”

(When I interviewed the girl who said that, she’d actually been out of the gang a few years, and held a job counseling gang kids in the neighborhood. She seemed pretty great at that. She cared about kids a lot. But she admitted, “I still have those feelings [of anger]. I come to work some days and feel like, I just want to get a hold of somebody and kick their ass in.” Of course she wouldn’t kick anyone’s ass in. She’d learned to handle the anger differently.)

The toughest girl I talked to was a girl whose name I didn’t give over the radio, but every gang kid in Chicago knew about her. She’d committed a murder that made all the papers, and was caught for it. If you want to hear what someone sounds like when she’s a teenage murderer, go to 16:18 in the audio file. Be prepared to like her, no kidding. Talking to her was a weird mix of things I think anyone would relate to, and funny stuff she’d say—she knew when she was saying something that was totally out there, and knew when she was being funny—but of course as soon as she started talking about how great it is to put a bullet in someone’s head, the relatability dropped a bit.

She was such a force on the streets that when she was only 14, one of the big Chicago street gangs—a gang that controlled territory all across the city—gave her four city blocks that she was in charge of for them. That’s how it works in Chicago. The big gangs divide their territory into smaller sections and put a different person—usually a guy—in charge of each section. So this girl ran a crew of 20 girls, and set the rules for those girls in those four blocks. She required every girl to carry a gun, which was unusual, and she required every girl to sell drugs, which was also unusual. She insisted on that because she wanted all the girls to have money. Money is power, and the whole point was: they were going to be as powerful as any guys. Here’s how she put that:

We wanna show off too. We wanna let ’em know, the guys ain’t the best. The girls can do better. The guys are scared to jump out of the car and blow somebody’s brains out. But the girls right away will do it, just to get attention. Just to be known.

’Cause we try to be bigger than guys, so we walk like guys and we’re tough like guys. Some of us even look like guys! A lot of us, we didn’t like to wear makeup. You know, we’re too tough to wear makeup. Unless we go out to a bar or something, we’ll get dressed up, in miniskirts and stuff. Usually we’re in our jogging clothes and our gym shoes, ready to fight. We always have to watch our back. I used to always wear my little gym shoes and my gang-colored jogging suits and, you know, I had to just be a stud. I’d walk with my hand between my legs like I had something there to grab.

And then when they see me go into a bar with miniskirts and makeup and heels and stuff, it’s like, “Look at her!” They will really freak out. They’ll freak out. And it used to feel good, because one day I’ll be a boy and the next day I’ll be a girl.

ME Why did you want to be like a boy?

HER I wanted to be tough.

The main thing I had a hard time understanding was the lack of conscience that these girls had about killing other kids. I mean, sure, I know they figured they were at war—it’s us or them. But still, it was weird to meet these girls I liked so much who felt this way. I interviewed these two sisters, one 13 years old, one 15. Each had been in the gang for two years, then the older one got out when she had a baby, whom she brought to the interview. They’re at 9:25 in the radio piece. I asked them about some boys they shot three times in the head: did they feel bad for them? They said no: “They’re in another gang, and you don’t care if they’re hit.” I asked if they thought that could be me and again, the answer was no: “I wasn’t thinking about anything. I was just trying to scare them. To—to think I’m tough and stuff. To tell my friends, so they can talk about me and say, ‘This girl’s tough and she’s down,’ and stuff like that. I was just doing it for fun. To try to show off with my friends.”

Horrifying, right? But at the same time, who doesn’t want to prove herself to her friends? I think one big draw of being in a street gang is that you get to throw away the normal, boring story of your own boring life and replace it with a much more dramatic story—a heroic story. It’s you and your band of friends against the world. And it’s life or death. And you guys are the stars of the movie. You know? That’s hard to resist. ♦

You can listen to the full radio story here.

Ira Glass is the producer and host of This American Life.