College isn’t for everyone. 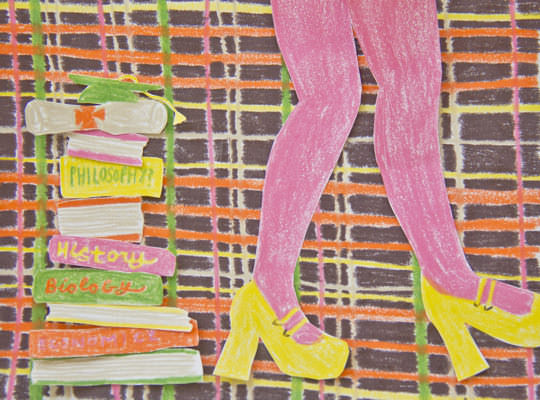 I tried going to college directly after high school, and I hated it. It was a small liberal arts college on the East Coast. Most of the students had wealthy parents whose monthly stipends funded weekly binge-drinking experiments, no one really cared about grades as they didn’t have to depend on scholarships to stay there, and none of my classes were interesting or challenging. I had visited some older friends at school a year before, and I thought all campuses were the same: late-night vending machine raids, fun roommates, and nonstop parties that spontaneously occur in the absence of parental supervision.

My particular school featured terrible cafeteria food, a stuck-up roommate who skipped classes to make mosaics out of empty beer cans, and an RA who materialized out of nowhere to shut us down when more than three people congregated because “IT’S A QUIET STUDY DORM YOU GUYS, OK?” I hated my major: a true child of the ’90s, I thought fashion design was going to teach me how to basically become Todd Oldham and was utterly surprised by the amount of business classes were required during the first semester. I took an English class for respite, only to have the young, floppy-haired professor insist that everything we were reading was a metaphor for the drugs I’m pretty sure he was taking. (At least I read Finnegans Wake.) I had no idea what I was doing there, and the entire situation was making me miserable. So, after my freshman year was over, I dropped out. I didn’t even have to think about it: I knew leaving a place that made me feel awful would make me feel better.

I was right. But my family still freaked out.

College is often the only viable option we’re given for a successful life after high school, and it can be a great tool if you know how to use it. Some people make lasting connections in college, or pick up valuable skills (face it: you’re not going to learn the intricacies of biophysics at your local coffee shop). It can be a place of great personal change and access to people who can guide you toward projects you’ve always dreamed of completing. It can be revolutionary.

It can also be a place where people get drunk and vomit on you a lot, where you are buried under a mountain of homework so vast it takes you four months to get out from under, and where the only exposure you have to vegetables is in the form of pizza toppings.

And maybe you already know exactly what you want to do with your life and are making the connections and learning the skills you’ll need to get there, and that plan doesn’t require you attend yet another learning institution. The structure and discipline of college can be useful for those who think of it as a step towards a life you otherwise wouldn’t be able to lead, but college might not be necessary for everyone. It might mean putting off for four years what you know you need to do to realize your dream life.

There are a lot of reasons you may not want to go to college. But what’s going to happen to the friendships you’ve so carefully cultivated when everyone leaves and you don’t have the experience of school in common anymore? What will people think? Are you destined to be a lonely cat lady within five years? These are some things I wish I had known when I decided to leave college.

1. People will never stop asking you if you’re eventually going to go to college.
And unless you’re clairvoyant, you will never be able to answer this question, which doesn’t stop people from asking it all the time. No matter what you’re deciding to do with your life, your answer will never seem good enough for some people. You have to learn to mentally flip the bird to them as you respond with something light and pithy, like, “Oh, who knows! Maybe one day.” These are the same people that will eventually plague your life with questions like, “When are you going to get married?” or “Don’t you want to have a baby?” What they’re really asking is, “So where exactly do you fit into this framework of social acceptance that I have bought into?” They are judging you by their own standards, and you shouldn’t be made to feel inferior as a result of not conforming to them. Even with a college degree, you’ll never know how things are going to turn out for you. Legions of songs about the long and winding road that is life exist for this very reason.

2. The first job you get after high school might not be awesome.
A lot of people go to college for job security—they think having a degree will insulate them from unemployment, or guarantee some sort of comfort in life. Anyone paying attention to the current economic climate in the U.S. knows that’s not true. Even with a bachelor’s degree, you could still end up working at a fast food restaurant. When I moved from my little town in New York to San Francisco the summer after leaving school, my grandmother asked why I’d go all the way across country just to be a barista. I told her that if I’m going to pour coffee, I want to do it in an interesting place. I’ve had so many jobs in so many places that my resumé reads like I was on the run from the law for most of my 20s. I worked in a TON of restaurants, bookstores and coffee shops. I stumbled into the office of an optometrist and a debt collector for a credit card company, and took countless temp jobs doing things like medical coding and customer service. Most of the time I worked at least two jobs simultaneously to make ends meet. None of them were awesome, and the majority of them made me entertain thoughts of murder at least three times per day. If your job sucks, it’s helpful to balance it out with the fun things you do outside of work. Can you afford to move to a different town or city? Maybe you go thrifting once a week? Are there free shows where you can see good bands anywhere nearby? Perhaps you take yourself to the art house movie theater every Saturday? You can still live a life and have great experiences even if you’re working for minimum wage, but…

3. You may have to live with a lot of other people in the same situation.
If you’re supporting yourself and earning minimum wage, you’re probably going to have roommates. It could be awesome—they’ll probably come with their own set of friends, which would immediately increase your social circle, especially if you move to a new town. It’s fun to have people around to watch TV with, or help you eat the pizza you ordered for dinner. It could also suck—they might have boyfriends or girlfriends that sleep in your house for weeks, eat all of your food, and never pay rent or bills. They may leave dishes in the sink for a while, or never think of cleaning the bathroom. It’s a crappy rite of passage, but take solace in the fact that even your friends at college have to live with people they can’t stand.

4. Your friendships may change.
Not going to college means you’re not going to have a lot of the same experiences as your friends for a while. But you could go to the same school as your friends and live in the same dorm and STILL have wildly different experiences. Not going to college doesn’t have to mean the end of your relationships, but it may mean you need to find a new way to navigate them, or be more intentional about communicating. Everyone will more than likely have horrible dating experiences, dilapidated apartments, and morally demeaning jobs for years to come—you’ll find a way to bridge the gap even if you’re not concerned with your GPA.

5. Your family may freak out.
Going to college means your parents finally get a break from the nonstop extravaganza that was managing your life for the past 18 years. When you tell them that you don’t want to go to college, it immediately translates to cartoonish dollar-sign eyes and extended chaos for them. If you’re going to skip college, try to alleviate some of the fallout by having a plan. Are you going to live with your parents for six months while working, saving money and looking for a roommate? Tell them that. Are you going to move into a neighborhood with dirty mattresses strewn about the street like urban tumbleweeds, no working streetlights, and a police-enforced curfew just because you found an affordable place to live? Make them feel better by telling them about the nice elderly woman who lives across the hall, or that you’re saving enough money to take a cab directly to and from work to your house. They’ll never stop worrying about you, but they probably want to stop paying for you now—it’s part of the secret contract they signed when you were born.

6. You’ll need to be self-motivated.
I always found ways to focus on things that were interesting to me as a way to mitigate my dreams versus my reality. Even though I wasn’t interested in learning about fashion design in a clinical, academic way, I still sewed my own clothes and paid attention to the way different designers got their start in the business. I’ve always loved writing, so I kept a diary, took out library books about getting published, and practiced different writing styles. Even if you change your mind about what you want to do with your life every year, you need to have some discipline. It’s really easy to get mired down in the day-to-day of it all and forget that you have passions worth pursuing. Be intentional about what you want and do anything you can to keep it going. There’s no such thing as a small step because you never know how things could turn out.

7. You’re going to be fine.
Even though your family or well-meaning others might make you feel otherwise, skipping college isn’t actually the end of the world. You can still live well, support yourself, travel, and generally enjoy life if you don’t go. You may even decide to go back later, once you’re sure of what you want to accomplish there. I went back 12 years after I left and loved it, so much so that I’m going to pursue a PhD in gender studies. For most people, the end of high school means the beginning of college. For some, it means a chance to take their lives in a totally new direction. But, like most experiences, college is so much more awesome when you actually want to be there. ♦