Literally the Best Thing Ever: Girls

Thank you, Lena Dunham, for making me feel like I will, eventually, be OK.

The New Wave, the Shag, and Flower Power 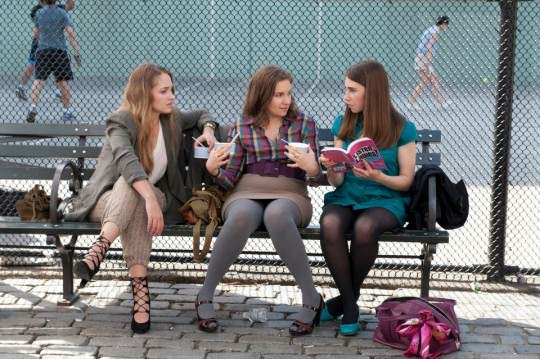 I wish Lena Dunham were a stuffed animal, or a Polly Pocket, or something else that is small and easy to carry around. Not because she is precious, or adorable, but because she, with her creator-of-the-new-show-Girls-ness, has become my security blanket. She is, thankfully, neither precious nor adorable, and Girls, which airs on HBO on Sunday nights (and the first ep of which is on YouTube), does not have a quirky, indie tone. It is simply HILARIOUS, and the characters are sometimes clever, but they are also sometimes embarrassing, sometimes stupid, sometimes assholes, etc. It’s funny for the familiarity of its seemingly unnecessary filler words and recognizable mannerisms. It’s poignant because it doesn’t moralize, but brings comfort just by presenting prototypical characters and making them feel less cliché, and less lonely. It’s important because it is a TV show on a big cable network that is run by a 25-year-old woman pulling from her own experiences and telling her own stories.

When we first tried contacting Lena to do something for Rookie, HBO told us they weren’t comfortable with such an adult show being promoted to teenagers. (We were eventually able to reach her directly, and she wrote this fantastic piece for us about the first time she had sex.) With respect to HBO, I honestly think this is the perfect show to promote to teenagers. It’s realer than anything I’ve seen thus far about what my life is just about to be. The characters are not perfect role models—they make mistakes and have shitty boyfriends and say the wrong things. But collectively, they represent a more realistic version of the whole being-a-young-grown-up thing than anything we’ve seen yet, and in my opinion, that’s a much healthier expectation to plant in YOUNG, IMPRESSIONABLE MINDS than the illusion that figuring out who you are and what you care about and what you do about that will be easy.

Girls premiered last night, but I was able to preview and save the first three episodes a couple of months ago, and I’ve watched each of them all at least 10 times. I have turned to them at four AM while lying in fetal position on my floor, and at normal times of the day while hanging out with friends and being excited that we can finally share a show that is about women and their friendships and relationships and things but that doesn’t make you feel like you’re watching some corny, vapid piece of turd you should feel ashamed for enjoying. Girls is one of the few mainstream things made for women that don’t have to be some kind of guilty pleasure, the way I have gotten used to apologizing whenever I admit that I own Music and Lyrics on DVD. (I am sorry.)

Normally I’m protective of my security blankets because I don’t want the things I turn to in crucial moments to mean ANYTHING to ANYONE ELSE. But Girls is a kind of security blanket I’m excited to share and to see other people obsess over and relate to, and to see having an influence. Yes, it is mainly about four privileged white girls—but it’s also about their having to get over many of the privileges they’ve always taken for granted. This should not be the only show about, by, and for women on television—other voices can and should exist at the same time that this one does—but Girls is a generally positive thing in this world that I would rather watch than a show about women and their stories as told by men. The tone and attitude of Girls feel totally new for TV. The show is not Sex and the City or Friends. It doesn’t have me fantasizing about a fabulous apartment and a collection of expensive pumps and a social world based on money and sex. It has me really just wanting to be OK with myself—you know, the thing you’re left with once you realize that the other stuff is all just aspirational.

But I don’t love Girls because it helps me justify my less attractive qualities. It’s, well, inspiring, too. While, like I said, the characters are not perfect role models and they make mistakes, they also have moments of personal growth and triumph. Last week, I told a girl who’d written to our “Just Wondering” column about loneliness that the key to basically everything in life, from the admittedly simplistic point of view of someone who is barely 16 years in, is to strike a balance between Liz Lemon and Stevie Nicks: meaning having humility about one’s flaws, and the ability to turn those “flaws” into something powerful. On Girls, Lena Dunham does exactly that. Her character, Hannah, says this: “My second-biggest baggage is that I just bought four cupcakes and ate one of them in your bathroom.” But she also says this: “No, I have not tried to lose weight, because I thought I’d have some other concerns in my life.” She starts a late-night self-pity party by putting on “Get Well Soon,” but reconsiders the cause of her self-pity to be something kind of adventurous and intriguing and moves on to “Dancing on My Own.” Then her roommate comes home, and they dance to it together, and hug. I promise you that this does not feel cheesy. Or “quirky.” Or like the two of them are about to kick off their high heels and dish about men, comparing ex-boyfriends to certain kinds of yogurts or candles. It feels totally sincere. It feels like I will, eventually, be OK. Even without a Lena Dunham stuffed animal. (I would still love one just for entertainment, however.) ♦