Don’t Shout It Out

NEVER EVER tell the truth about your feelings, because people will pretty much run for their lives. 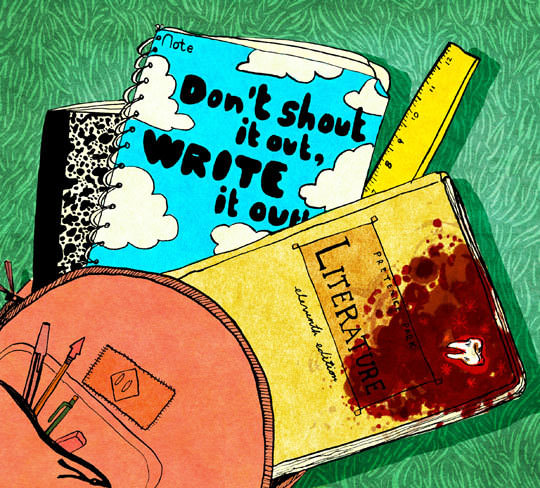 I hate you. I want to kill you. Ha ha just kidding! I mean, how stupid would I have to be to actually write my real feelings in this thing? One lesson I’ve learned from this whole disaster is NEVER EVER tell the truth about your feelings, because people will pretty much run for their lives. And never put anything in writing unless you’re prepared to burn it, or insist that you were joking.

Confession: I’m currently hiding in the handicap stall of the girls’ bathroom, trying not to cry. I’m supposed to be in the principal’s office with my mom and her lawyer, making angelic expressions and apologizing for the billionth time. My mom is furious with me. We JUST moved here so she could supervise this Apatosaurus dig that’s getting tons of press, and I’m already being an embarrassment. Yeah, I get it, Mom, you’re super important, except have you ever noticed that your job is brushing off dirt from one-billion-year-old dead things? You’re basically a janitor for bones. And you’ll probably be brushing dirt off my bones soon if you don’t start taking my depression seriously. Again, totally kidding! Ha ha ha…

What’s worse is that there are some girls in the bathroom gossiping about me RIGHT NOW. I can hear the snap of their powder compacts as they touch up their identical faces. When I came to this school, the first thing I noticed was the large percentage of girls who look exactly the same. Like, they could probably do each other’s homework and swap boyfriends and no one would even notice. It’s not just that they have similar fashions and hair- it’s something way more boggling and mystical, like an elite shared consciousness. I imagine them peacefully passing in and out of each other’s identities, like the Borg from Star Trek. I wonder if they have the same dreams at night. That would be so cool.

When we first moved here, I tried really hard to be friends with them. I identified the girls in charge, and made sure to compliment their jewelry and stuff. I was going to teach everyone how to play Multi-User Dungeon II, but apparently no one’s into computers here. At my old school in Rapid City, we hung out in the computer lab every day after school and had the best time. Ms. Vega was awesome and let us have Pizza Fridays. I could be having Pizza Friday right now if it weren’t for that stupid Apatosaurus. But I guess it’s pretty immature of me to blame my problems on a dinosaur.

“I heard they’re cancelling the ice-skating party because of this bullshit with the new girl,” I overheard one of the girls saying.

“We can still have the afterparty,” the other girl said back. “Jeannie’s cousin said he’d get wine coolers. But that means we have to be nice to him.”

“Ugh. This is such a drag. My plan was to flirt with Jim Neiken at the skate party, and then ignore him at the afterparty. Now there’s only one party, but I can’t flirt with him and ignore him at the same event or I’ll look like a spaz! This is all the new girl’s fault.”

I didn’t want to hear this anymore. I covered my ears, but I could still hear them.

“It’s Colin’s fault too,” the other girl was saying. “He was being a jerk.”

“She didn’t bite him! I heard she hit him on the head with a book.”

They were giggling. Then I heard my mom’s voice: “Hollis? Hollis? Are you in here?”

I heard the girls snickering and whispering, “Oh my god! She’s in here!”

Interesting—I didn’t realize I could become more humiliated than I already was. Turns out, anything is possible. I held my breath, trying to be silent and hoping my mom would just go away. But my eyes were stinging, and a hot tear fell down my cheek. Then there was another tear, and then I was crying, and I knew my mom could hear me. She pushed open the door of the stall.

“Perfect!” she said. “Look at those big, sweet tears. This is exactly what Mr. Gleason needs to see. Come on, quick.” She yanked me off the toilet seat and dragged me out of the stall. The other girls were looking at me like oh my GOD. I tried to smile at them, as if I could convince them that this was just a funny prank. Precisely then, the bell rang, and people were spilling out of classrooms right and left, with me being dragged along by my mom, tears streaming down my face like a preschooler.

At that point I pretty much blacked out from embarrassment. I barely remember what happened in the principal’s office. I guess I mostly sat in the corner crying, while my mom and her lawyer argued with the guidance counselor. As it was happening, I vaguely registered that this was a low point I would shudder to remember for the rest of my life. Maybe I could employ a hypnotist to erase this entire day from my memory. Ideally there’s a hypnotist who does mother-daughter specials, and we can both get our memories erased and forget that this awful, humiliating day ever happened.

On the way home, mom let us stop at Sprinkles to get ice cream cones. “Not because you deserve one,” she said pointedly, “but because I do.”

Mom’s lawyer, Don, came too. It was like he’d never had an ice cream cone before. He asked the checkout girl a hundred questions about the origin of ice cream (“How do they come up with all these flavors?!”), and ended up getting a double scoop of rum raisin and rainbow sherbet, which is the most disgusting flavor combination imaginable if you ask me.

The three of us sat down at a table shaped like a cow. I had a cookies-and-cream cone, which is my favorite, but I could barely taste it. It’s weird how none of your senses quite works after you’ve been crying a lot. Everything seems different for a little while—dreamy and airy and dim. It’s nice. I was staring at a big poster of a cow eating ice cream, which I’m pretty sure is cannibalism.

“This establishment promotes cannibalism,” I said, trying to lighten the mood.

“I didn’t either,” I said, and was surprised by how meek and small my voice sounded.

“Your timing couldn’t have been worse. We just started the site survey at Standing Rock.”

“Hollis, do you realize you were this close to getting expelled? Luckily, Don was a magician and pleaded you down to a one-week suspension.” She patted him on the shoulder.

Don was wrinkling his nose at his ice cream cone, like it was the strangest sight he’d ever beheld. I was starting to wonder if he was even paying attention, when he said loudly, “It was the tears that did it!” Then he took a huge bite of ice cream, followed by another even bigger bite. “Pretty good!”

Mom turned back to me. “And don’t think you’re spending this whole suspension locked in your room on the computer. Where’s that little journal the counselor gave you?”

I held it up. It’s a spiral-bound notebook with pictures of clouds on the cover, and the words: Don’t shout it out, WRITE it out!

“Ten pages a day, no excuses.”

“This is a fresh start,” she said. “No more gloominess. No more crazy behavior.”

“Ice cream is good for the soul!” Don boomed in agreement.

Now I’m in my room, finally alone. I looked for Gerry the Warlock online, but he wasn’t around, so I’m playing Zork. Mom threatened to take my computer away, but I think she realized that would be kind of cruel, because at this point the computer is my only friend.

Mom’s yelling at me that I have a phone call. It’s probably my dad, and he’ll make a big deal about how it’s long distance. He’ll say he wants to know what happened, but really he just wants me to talk as fast as possible so we don’t run up the bill. I-clobbered-a-guy-I-don’t-know-why-maybe-I’m-a-psychopath-BYE.