God, you’re good at this.

Everyone relaxes in different ways. Some people bake cookies. Some go for a run. Others take a bubble bath. 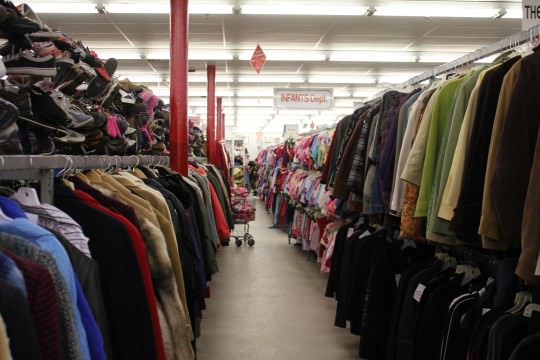 To me, there’s nothing like wandering the aisles of a thrift store, idly letting my fingers brush the racks of sweaters, feeling for wool and cashmere and fuzzy angora. I crave the thrill of the hunt, the adrenaline rush of a major score, the pair of really odd shoes from the ’80s that no one else will have, ever. 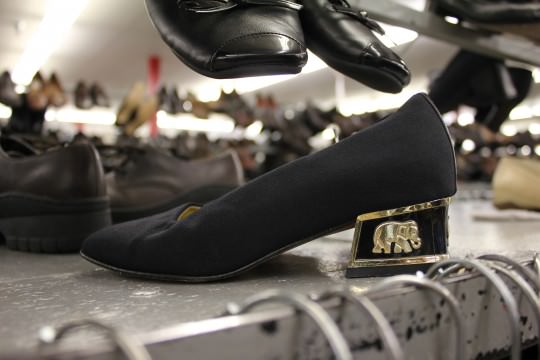 Shopping at a thrift store isn’t easy like going to a department store—it’s work. That’s what I like about it. I like the digging. I like leaving with something special that was really cheap and looks awesome, then having someone freak out on me, going, “OMIGOD I LOVE your shirt, WHERE did you get it???” and casually tossing out, “Thrift store,” and have them frown and go, “Oh.”

You paid $30 for your vintage-look ’80s band T-shirt? Too bad, sucka…the one I’m wearing is real, came pre-softened, and was 90 cents.

But listen, frowning person and fake-vintage-T-shirt wearer: I’m not here to feel smugly superior to you. I’m here to help! Never been thrifting before? Not sure where to start? NO WORRIES. Me and my two skilled thrifting friends Jen and Kate will be your Guide to All Things Used.

But! Before we get down to it, there are two things I want to cover. 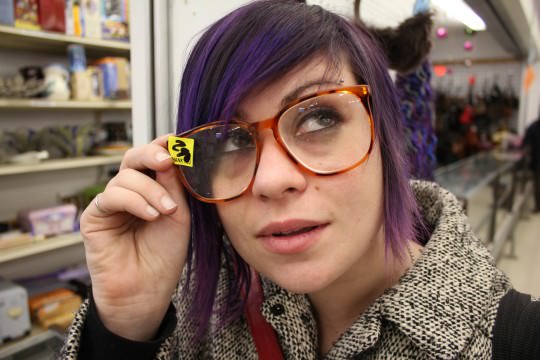 It may seem obvious, but not all thrift stores are created equal. Here is what is NOT a thrift store:

A place that sells upscale secondhand clothing.
Places like Plato’s Closet, Buffalo Exchange, and Crossroads are NOT thrift stores. They sell name-brand, imperceptibly used clothing. A dress will probably run you $14-$35. Cheaper than a regular clothing store, but definitely not a thrift store.

A vintage store.
Vintage stores are cool as hell, but they’re also expensive and pre-thrifted. Someone with a great eye for design went thrifting for absolutely everything you see in a vintage store, then carefully cleaned each item, sewed up the rips, and is now reselling it for upwards of quadruple what they paid for it. Vintage stores are full of awesome, high-priced stuff because they know full well what they have, and they’re banking on the fact that you don’t have the time or energy to go out into the thrift-store world and find that awesome stuff for yourself. That’s where they’d be wrong. 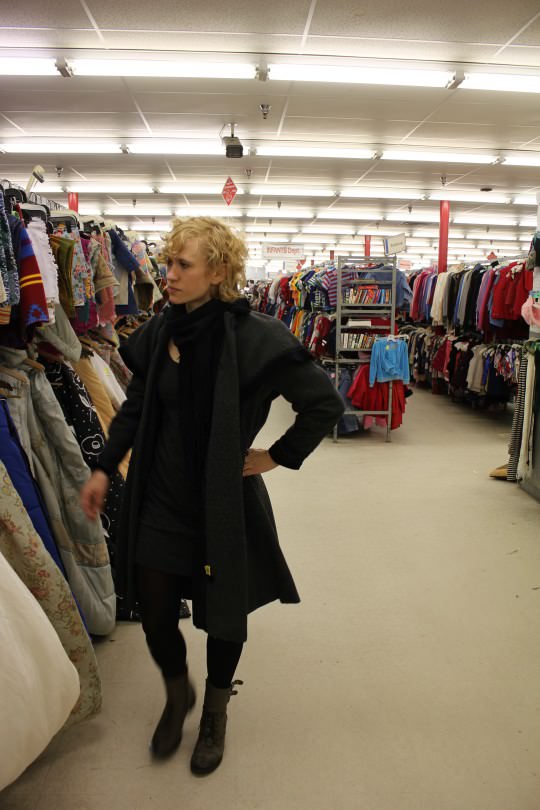 A real thrift store sells clothing that comes directly from the bags that people have dropped off for donation. The clothes aren’t checked for rips, holes, missing buttons, or stains—they’re sold as-is.

A real thrift store is often large and only loosely organized. It sells clothing with hand-written tags stapled onto it. Sometimes those tags are color-coded, because the thrift store has days where, say, all the orange tags are half off, or days when all the pink, white, and blue tags are all half off. 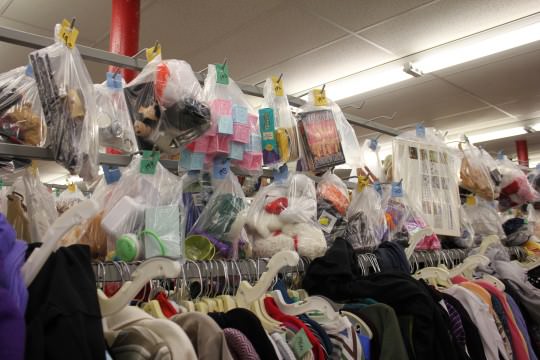 Real thrift stores have little paper calendars up by the register that tell you when the big half-off sale days are. Make like a crafty hoarder and grab one of these for your fridge.

Often, real thrift stores are dirty, with clothes strewn everywhere. Don’t be alarmed. Be thankful for the mess—it scares away the shoppers who aren’t as adventurous as you are. The truly brave are always rewarded with the most outrageous finds.

2. It doesn’t matter where you are. Thrift stores are everywhere. 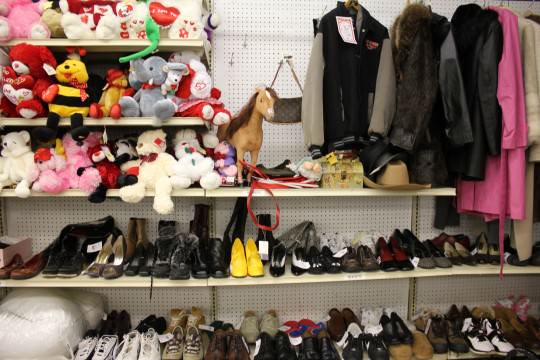 Now, I live in Chicago, which is blessed with some of the best thrift stores around, but if you live in a small town or rural area, don’t fret. Amazing thrifting is to be had in small towns. The best thrift store I’ve ever been in was on the outskirts of Appleton, Wisconsin.

Iowa, Nebraska, Montana, North Dakota—less-populated states and small towns are fantastic for thrifting, because the stores haven’t been picked over by hordes of hipster kids. You know why? ’Cause thrifting ain’t cool there yet.

Sure, it’s cool to live in a big city and go thrifting—it’s a fun way to spend an afternoon. 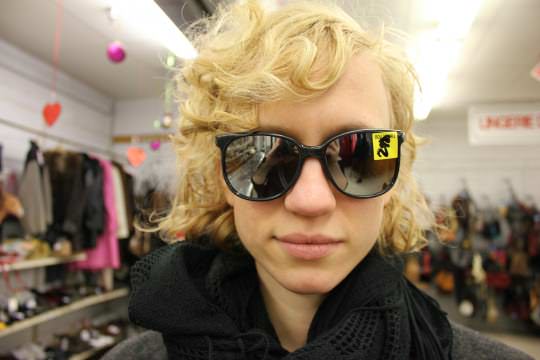 But in places like Fargo and Sioux Falls? You’re competing with almost no one for great stuff. Grandmas clean out their attics all over the country, not just in big urban areas.

The smaller the town, the more likely you are to make out like a bandit.

It’s 11 AM on a Saturday, and you wanna go thrifting. Let’s get down to it. 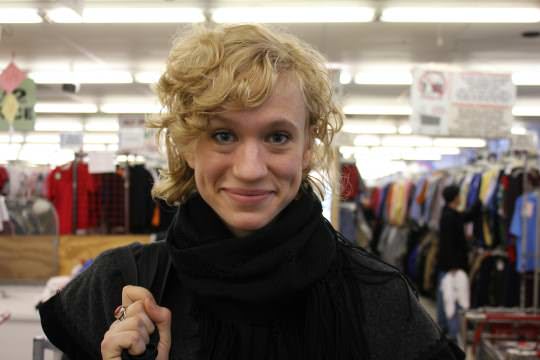 Here are some tips for making your day a success:

Above all else: Eat something first. Then caffeinate yourself into a frenzy.
You are about to deal with an insane barrage of clothing—thousands upon thousands of items—that are not arranged by size and are jammed onto racks higgledy-piggledy. You will be there for hours. Do NOT go into a thrift store hungry or tired. There will be shoes and purses and racks of shirts and toys and furniture and housewares and books and a jewelry section, and you’re going to need energy to get through it all.

Thrift stores, with their mess and noise and pushy old ladies and faint musty smell and squalling babies, can sometimes overwhelm you with their sheer disorganization and sadness, like Atreyu in the swamp in The Neverending Story. Don’t give in to the sadness! You must enter that store with enough energy to make it out alive and victorious, loaded down with finds. 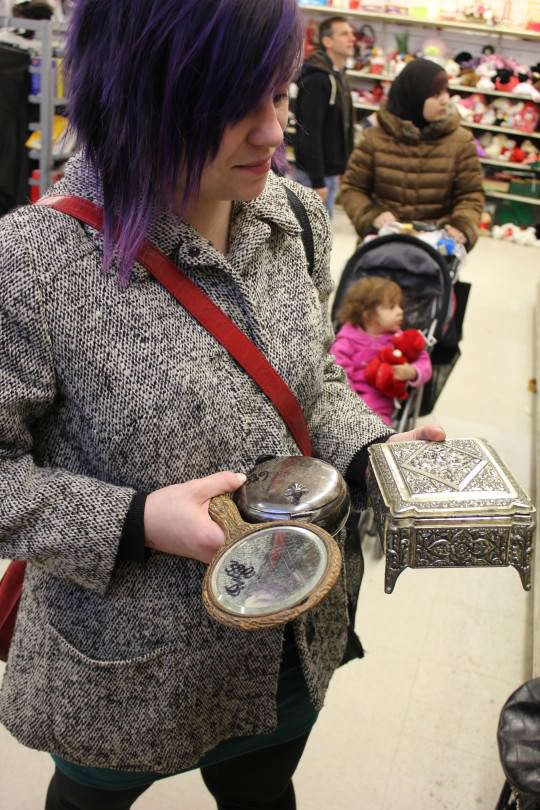 Wear the right outfit.
You’re going to be trying on lots of clothing, and you’ll have to try most of it on over your clothes, as there probably won’t be a dressing room. Wear something simple. A stretchy one-piece dress. Skinny jeans and a T-shirt. No weird necklines or giant sweaters.

Know your shopping companions.
I like to thrift alone. I like to look where I want, pore over the jewelry case, thoughtfully purse my lips as I flip through endless racks of dresses.

But if you’re not thrifting alone, bring only friends who won’t drag you down. The worst thing is to bring along a friend who shops exclusively in malls, who will trail behind you going, “I’m bored. This is boring. I can’t find anything. This place smells. Ewww, who would buy that? This is gross. I can’t find anything.” This is the person you leave at home. Or bury under a pile of battered children’s books in the toy department. 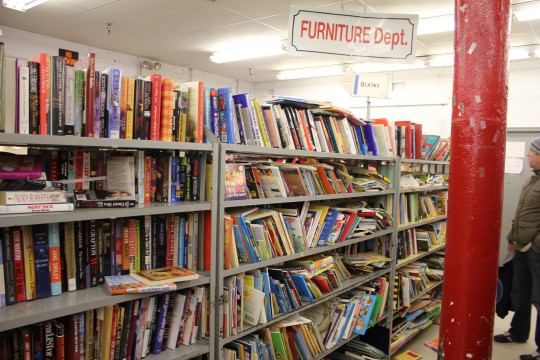 What you want is a crew of skilled thrifters, tried and tested in the battlefields of the biggest thrift stores in town. 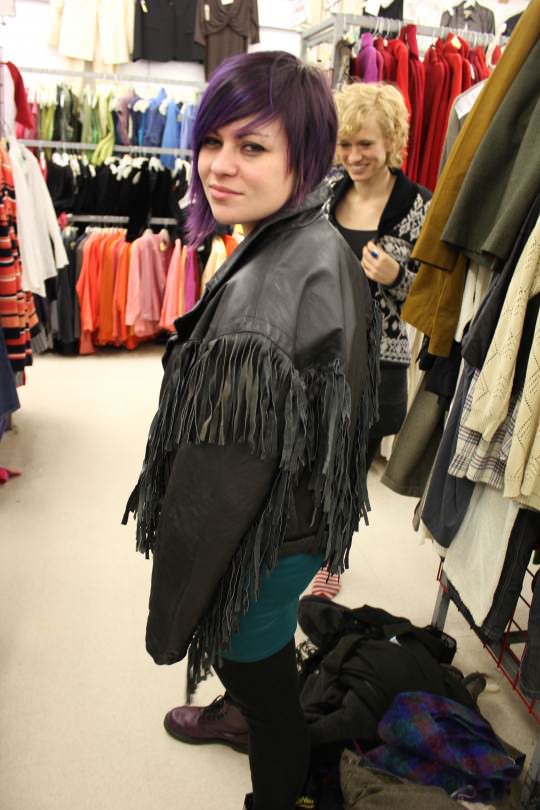 The very best scenario is to thrift with friends who are cheerful, adventurous dressers, and not your size. That way, everyone can shop in the same sections at the same time, and there are no “I saw it first” awkward moments with your soon-to-be-ex-bestie when a pair of size-seven Jeffrey Campbell chunky heels is sitting on the shelf. 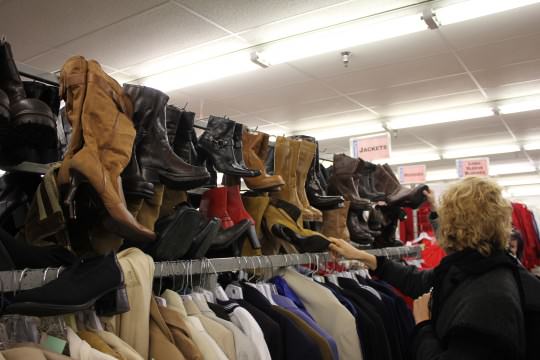 When entering a thrift store, don’t get overwhelmed and start wandering around aimlessly. Grab a cart, home in on a section (e.g., skirts) and dive right in. Look over the entire rack, pulling out anything that looks immediately interesting, then shove all of the hangers as far over as they can go and start flipping through the skirts one by one. This gives you much-needed space on jammed thrift-store racks.

Look through everything. Throw absolutely anything that looks approximately right for you (in terms of shape, cut, size, color) into your cart and forget about it. Have one big try-on session at the end with all the stuff you piled into the cart.

No dressing rooms? No problem.
Many, if not all, of the best thrift stores don’t have dressing rooms. (We will never know why.) Instead, there will be several mirrors scattered around the store, with groups of people gathered around them trying things on. You wore a simple outfit, so it’s not a problem. Don’t be shy—hustle up to that mirror and try on all clothes in your cart quickly, pulling them on over your current outfit, making sure to share the mirror with everyone else. 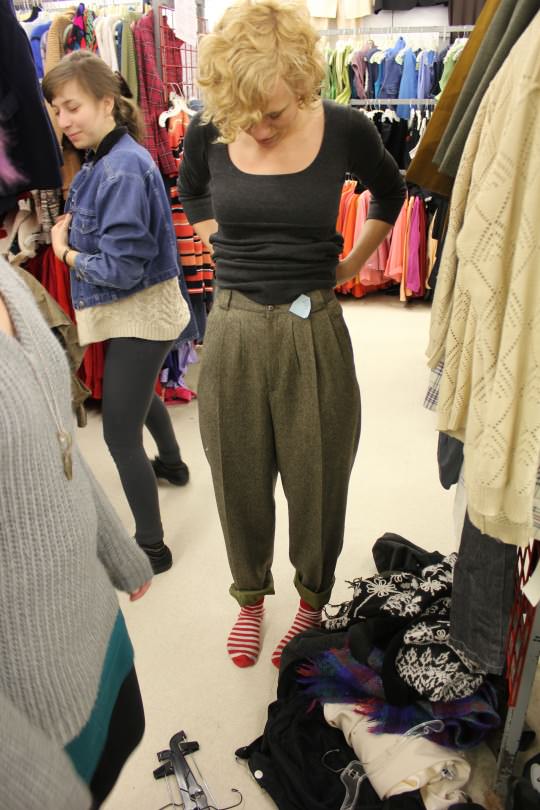 Wait, though…what if you want to try on jeans? Not so easy, now, is it? You’re in public! How are you gonna take off your pants in public?

Here’s how: Go to the skirts section. Find the biggest, roomiest, elastic-waisted, floor-length skirt you can find, and put it on over your jeans. Then drop your jeans, grab the new pair you want to try on, and pull them on under the skirt. Then drop the skirt. Ta-da!!

Look through all the sections.
The bedding department often holds other linens, like adorable vintage aprons. The man-sweater section is a treasure trove of giant cashmere sweaters that women have given their husbands and their husbands have refused to wear. 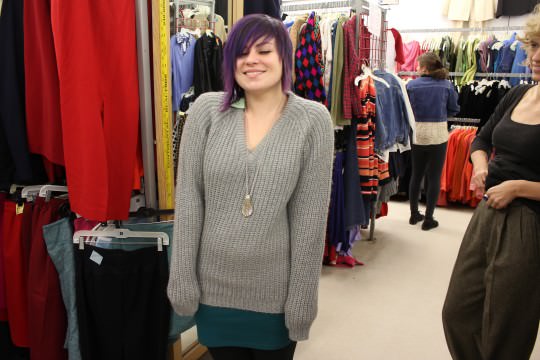 The kids’ section has hoodies and T-shirts, the sleepwear section has vintage slips, men’s shoes has great cowboy boots hidden among all the loafers. The underwear section has silk camisoles from the ’40s, the furniture section has awesome ’60s luggage sets, and the books have best-sellers you’ve been meaning to read and weird teen-girl novels from the ’50s.

Look up high and down low—the best stuff is hiding out of eye range…sometimes hidden by other sneaky thrifters in the hopes that no one else will find it before they return. 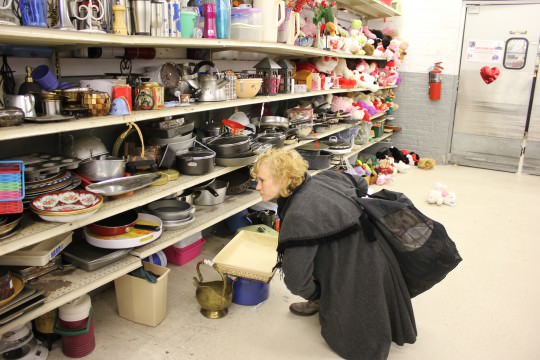 Poking through random sections of the thrift store is incredibly rewarding—you never know what you’ll find. 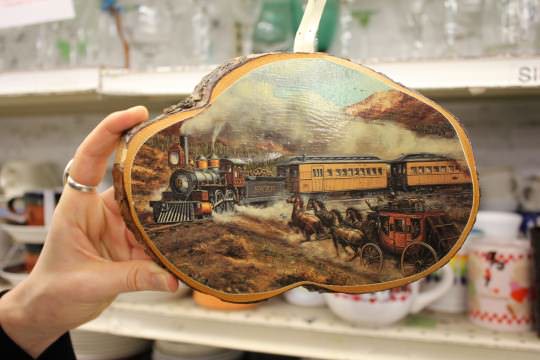 Know your weaknesses.
This is my weakness: 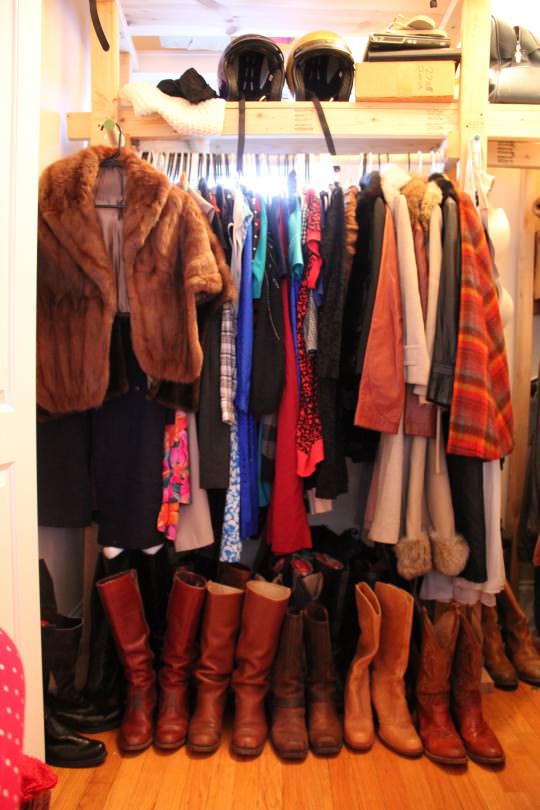 Maybe you love, say, hand-knitted fisherman’s sweaters. But you already have five of them—do you really need another? 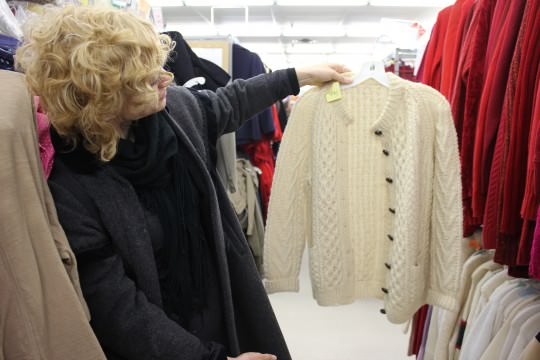 Thrift stores are full of bargains, but remember: you’re not saving money if you’re not going to get around to wearing that $4 sweater. 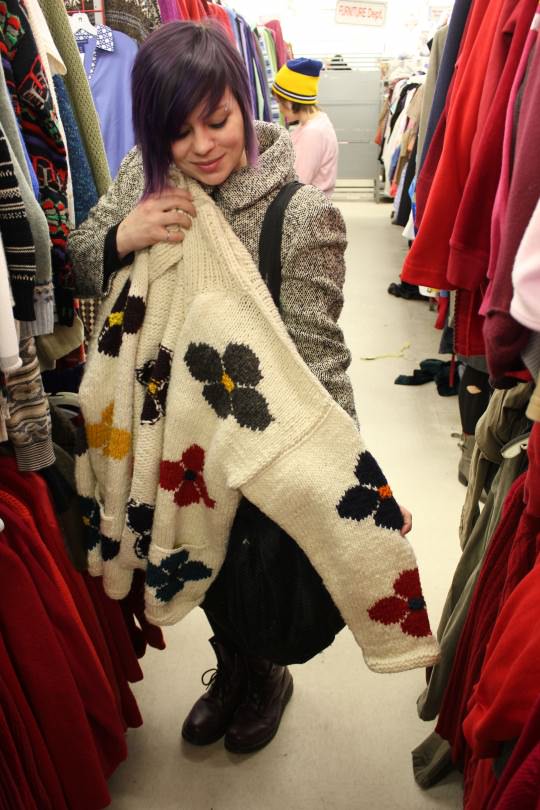 That brings us to…

Are you really going to wear that?
Learn from me, y’all. No matter how cool something is, do NOT buy it if it “needs some work” and you’re not actually going to fix it up.

My drawers are a graveyard of blouses I think I’m going to sew buttons onto, sweaters whose sleeves I’m going to cut off for legwarmers, dresses I keep meaning to have hemmed.

You guys, thrifting is absolutely fabulous. 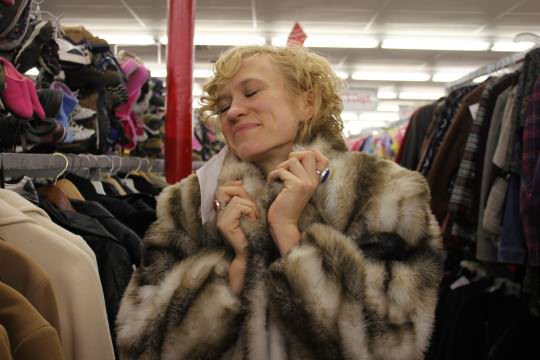 It requires energy, determination, and a laser-like focus. It’s a way to level the playing field for those among us who can’t, um, always afford the newest things in magazines. Twelve-hundred dollars for a pair of elbow-length leather gloves? PLEASE. Thrift until you find $4 leather gloves just like the ones you saw in Vogue. Wear them to a party. Everyone will be jealous, and you’ll be the cleverest girl there. ♦