Dora the Explorer is one of the most bizarre cartoons on TV today. 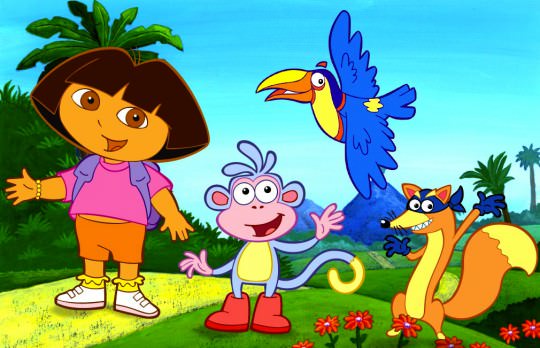 Dora Marquez, the titular animated heroine of the children’s series Dora the Explorer, has so many admirable traits. She’s friendly, optimistic, fiercely independent, and smart, and her haircut is cute. I can understand the appeal of a show centered on this character. But I’ve watched a handful of Dora episodes (which is a handful more than anyone over the age of four should ever watch), and there’s no denying that this is one of the most bizarre cartoons on TV today. To wit:

Dora explores the forest without any parental supervision.

When I was seven, I wasn’t even allowed to play in the front yard by myself. But here Dora is, traipsing around the forest on her own. Does she ever tell her parents where she’s going? When she cuts school to chill with her animal crew, do her parents just dismiss it, thinking, Well, she is an exploradora? She has a talking map and a magic backpack—two things that were unavailable to me when I was seven—but that’s really no excuse. The world that she lives in is 10 times crazier than ours. Dinosaurs still exist, bulls walk upright. This is not the kind of environment that a little girl should be exploring solo.

Dora is precocious and outgoing. She’s never met a woodland creature that she didn’t want to talk to. In other words, ella habla con alguien. Dora believes that everyone—be they little red fish or little blue bird—is basically good. On one hand, this is a wonderful quality and I, being the jaded adult that I am, wish it were possible to recapture some of that innocence. But her trusting nature is also kind of dangerous. I don’t think educational shows should teach kids to be afraid of every stranger that they meet, but these shows should advocate caution, right? Dora, however, is liable to take a ride in an unfamiliar octopus’s submarine or accept a mysterious crab king’s offer to kick it in his sandcastle, no questions asked.

Dora’s best friend is a monkey who wears red boots.

Dora’s BFF is a monkey. This makes sense. If a monkey lived nearby, I would certainly befriend him and, like Dora, would probably put all of my human friendships on the backburner to hang out with him as much as possible. But this monkey wears boots, which is unnatural and creepy. Let’s just be realistic here: if you saw a monkey in the forest, walking around in boots, would you grab his little primate hand and go on an adventure with him? No. You would scream and run in the opposite direction.

Dora’s magic, anthropomorphized backpack Backpack will provide her with whatever she needs to accomplish a task. If she needs to fill something up with water, there will be a bucket inside of Backpack. But because this show is all about viewer participation and problem solving, Backpack will present a few other items to the audience along with the bucket, like a ball or maracas, and then ask which is the most appropriate for any given situation. After the correct object is chosen, the leftovers float back into Backpack and it says, “Muy bien. Yum, yum, yum, yum, yum. ¡Delicioso!” So, does this mean that Backpack just ate those other items? Is all of the space inside of Backpack its stomach? And if it is a stomach, does that mean that everything that floats out is actually being regurgitated? Backpack’s mouth is on the front of the bag, but all of the items float in and out of the flap that’s on top of the bag, so does that mean that Backpack ingests food through its head? What is going on here?

This show is so loud.

Dora is enthusiastic about stuff. I get that. But does she have to shout all the time? OK, so if Swiper the fox is swiping things, you’re going to need to raise your voice. But even when Dora is whispering, she’s yelling. Then again, I’ve watched my two-year-old cousin watching the show, and he doesn’t seem to have a problem with the volume. It might just go back to that saying: If Dora the Explorer is too loud, then you’re too old.

Dora’s innocent interest in exploration has become an unhealthy obsession.

We should all probably take a lesson from Dora and try to learn more about the world around us, spend some time out in nature, and help local animals solve their problems. But when does a healthy fascination with exploration become mania? After 12 years, perhaps? Dora the Explorer has been on the air since 2000! You may have watched this show when you were in preschool (maybe even when you were a little bit older than that), but I’m going to go out on a limb here and assume that you’ve long since stopped or are, at the very least, not as fanatical about it as you once were. And while you’ve undoubtedly moved on to shows with adult themes and situations, Dora is still walking around that forest, apparently having made it her life’s work. Sure, her calf muscles are, by this point, rock hard—but at what cost? She’s like the Captain Ahab of animated children’s programming, her insatiable need to explore paradoxically blinding her to so many of the world’s wonders.

Dora will ask a question and then remain eerily silent for eight seconds.

The long, awkward pause is common in these sorts of educational kiddie shows that encourage viewer interaction. The cartoon protagonist breaks the fourth wall by asking the audience some question that’s meant to engage their precious, unsullied young minds, then quietly waits for a moment, giving children enough time to shout their response at the TV screen. But Dora’s pauses are unsettling. “What was your favorite part of the trip?” she inquires at the end of every episode. The chipper background music stops abruptly. Dora stands there silently beside her monkey consort, boring holes into you with those huge brown eyes. Her body is frozen, her mouth an inscrutable straight line. This lasts for eight of the longest seconds that you will ever experience, and just when you think things couldn’t be any stranger, she blinks her gigantic, soul-piercing eyes a single time, to make sure that your bones are thoroughly chilled. Dora is such a perceptive character, but for some reason she doesn’t understand how creepy sustained eye contact can be. Or maybe she totally understands this and the subtext here is that she’s a sinister little girl who isn’t happy unless she’s haunting everyone’s dreams. Who can say?! ♦