Friday Playlist: Hanging Out With Alice (in Wonderland) 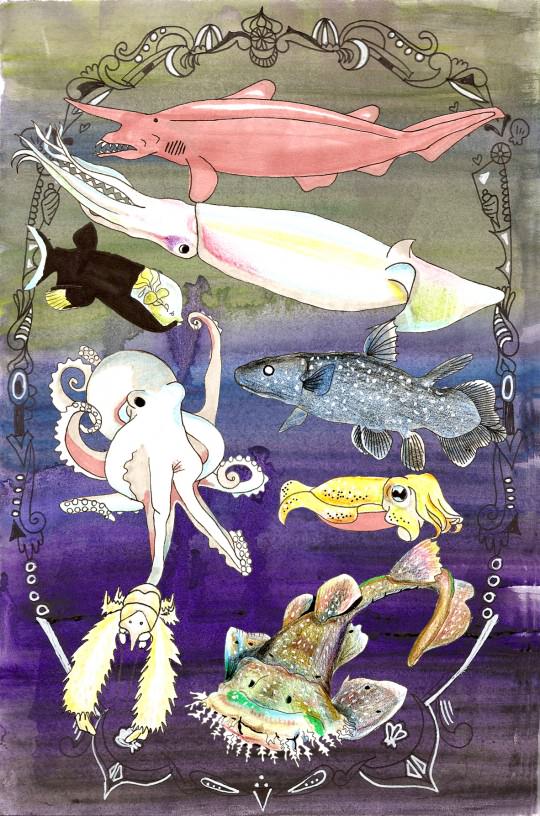 Amy Rose: When I was very little, I would introduce myself to strangers as “Ariel,” as in the Little Mermaid, and insist against my mother’s corrections that, no, that was in fact my name. Amy Rose who? Clearly, I’ve always really loved the ocean, a fact which is still truer than true today, even if I don’t actively identify as a mermaid anymore (in public, anyway). As much as I adore the sea, Rachael has one-upped this passion by actually working full-time for an ocean-conservation group. Obviously, we can both agree that marine life is Literally the Best Thing Ever. Here are some fantastic aquatic fauna that illustrate just why we feel this way: 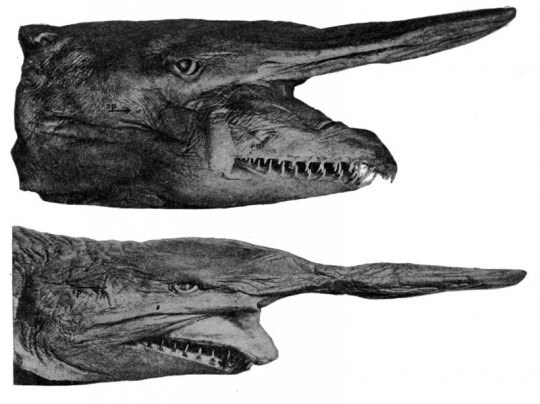 See that terrifying mouth? It’s DETACHABLE. When this horrifying monstrosity closes in on a tasty fish, it SHOOTS ITS OWN JAW at the animal to catch it. Seriously, it’s the craziest thing you’ll ever see.

Goblin sharks live near the ocean floor, so deep that we rarely get to see them alive. They eat squid, crabs, and fish—basically anything they can catch with their terrifying shooting jaws. Also, their skin is so thin that in the light, they look pink. On another animal, that might be cute. On a goblin shark, it just adds to the terror.

On the other end of the shark spectrum is the tasseled wobbegong. This animal is like, anti-shark. It doesn’t even TRY to be scary. To begin with, it has the most ridiculous name of all the sharks. Just try to say it without laughing. WOBBEGONG.

But the ridiculousness doesn’t end there. The tasseled wobbegong is camouflaged. AS SEAWEED. 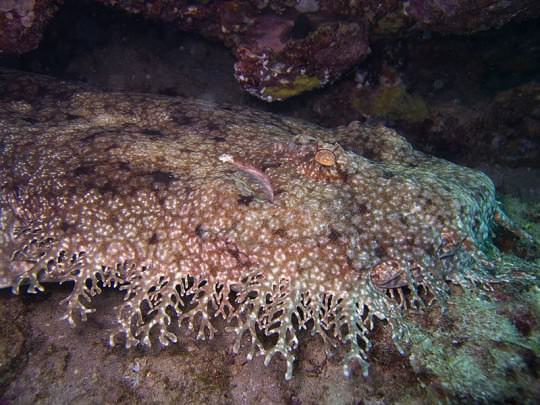 Seriously. That picture is of a shark. An adorable, leafy shark. It lives on the ocean floor, where it just kind of hangs out, as seaweed does.

But don’t let appearances fool you. Those ridiculous tassels hide the face of an ASSASSIN. Get too close, and you’re dinner. One specimen recently made the news for eating another shark whole.

Firstly, because I know someone is going to say it, yes, sharks are fish. Whatever, we’re writing the article, and we choose the categories. This one is for the OTHER fish.

Like the coelacanth. The coelacanth is an ancient fish, with weird tubelike organs and bone structures that tie back to earlier days in evolution. In fact, for a long time, as far as we knew, coelacanths existed ONLY as fossils. Then we found one alive.

This was a BIG DEAL. This would be like finding a wooly mammoth wandering around the Arctic. Scientists figure coelacanths basically stopped evolving about 400 million years ago. We discovered the coelacanth when someone accidently fished one up, and that’s pretty much the most contact anyone has had with one. They can’t survive the pressure change when we try to remove them from the deep, so we have to study them in the wild, which takes a lot of work. We think they give birth to live young, but we’re not sure. Only one baby has ever been photographed.

If you google it, the fish itself appears to be rather…hideous, but that’s because the only clear pictures we have are of old dead corpses. Apparently when they’re alive, they’re actually a very pretty shade of blue. 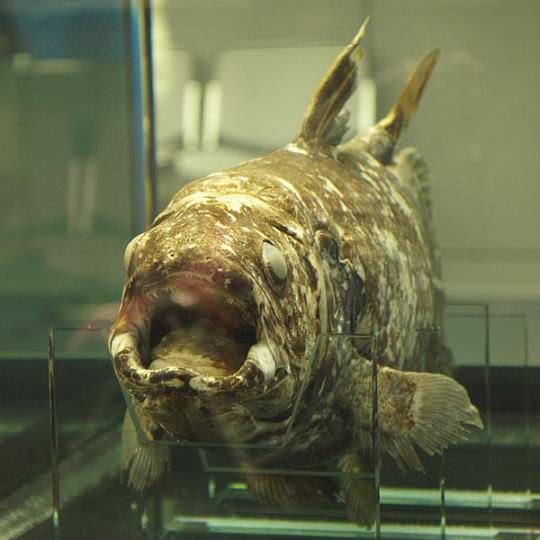 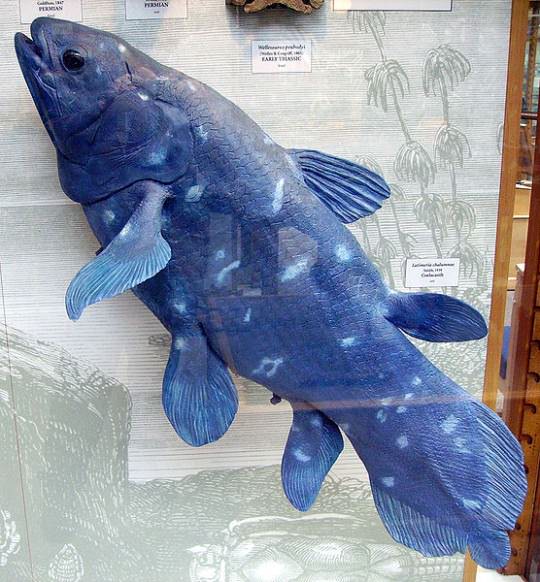 What you can’t tell from these pictures is that these fish can be SIX FEET LONG. Also, they live up to 60 years and give birth to live young. They’re basically HUMAN, except underwater and without opposable thumbs. In fact, one theory says that these fish are closely related to the species of fish that grew legs and gave birth on land to life as we know it. THIS THING IS YOUR GREAT-GREAT-AND-SO-ON-GRANDPARENT.

OK, you’re saying, coelacanths are really cool, but mostly for historical reasons. This is the ocean we’re talking about—there’s got to be some fish that’s indescribably weird.

How about the barreleye? 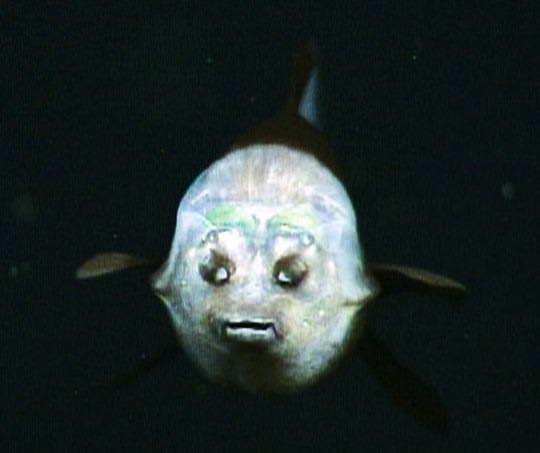 That’s not a computer-generated image. That is a photograph. The barreleye fish is one of the WEIRDEST fish in the sea. They compensate for the darkness in the deep by growing gigantic barrel-shaped eyes (the green globes in the picture—the things that look like eyes are actually nostrils). These eyes are set deep in their head. Their TRANSPARENT HEAD.

Apparently these eyes are super-sensitive to light, and the fish spend most of their time staring into the water above them waiting for silhouettes or glowing creatures to swim past. Then they swivel their eyes forward and take chase. It’s speculated that they also steal fish from jellyfish’s stinging tentacles, which they can do without fear because their eyes are safe behind a transparent shield.

Want to see this fish in action? The Monterey Bay Aquarium filmed a video of one in the wild:

Cephalopoda is the class of animals that encompasses all the coolest, strangest, and prettiest creatures of the sea, including octopi, squid, nautili, and cuttlefish (which you basically must refer to as “cuddle fish,” it’s the law). The name of the class originally comes from the Latin for “head-feet,” which aptly describes the weirdo bods that these guys all have—tentacles that are attached to their cute little faces. They also all share a supreme intelligence—they are said to be smarter than every other species of invertebrates. Seriously, watch this video of an octopus making a fortress complete with a BROKEN-GLASS TURRET (come on, that’s amazing), and then maybe go spend a breathless hour on YouTube looking up things like “octopus opening jar” after that:

I should have figured that octopi would be intelligent and dexterous enough to put their many tentacles to good use, but I still found this level of apelike tool utilization kind of astonishing. Squid are also incredibly smart, and this can be awesomely terrifying when a person realizes that, oh, that enormous, mythical-seeming giant creature that can grow to almost 50 feet? It’s also an evil genius. Humboldt squid, which are slightly smaller than the full-blown colossals (they grow up to six feet in length and weigh around 100 pounds, so, like, still quite frightening) are so ruthless and smart that they can “rip flesh into bite-size chunks.” 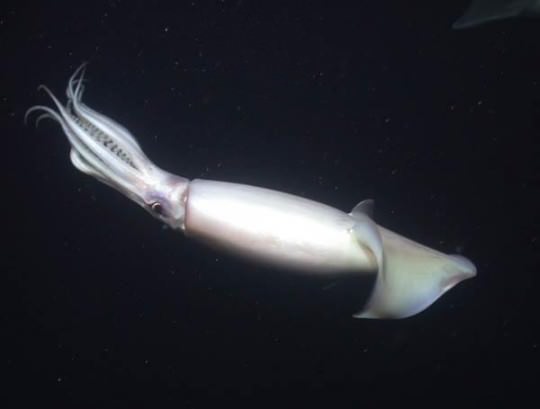 I guess there’s a good reason why squid are the main enemies in underwater Super Mario levels after all. Side note: In researching this piece, I totally bought this Blooper barrette off Etsy. Don’t make fun of me!

Squid are fascinating for so many reasons besides their scary-cool intelligence and deep-sea gigantism, though (by the way, if you read that article, do NOT click “giant isopod,” seriously, UGH EW EEK). Have you ever heard of chromatophores? They’re incredible—definitely one of the most beautiful natural phenomena out there. Basically, what they are are color-changing cells on the outside of the bodies of most cephalopods that allow them to communicate (excepting the nautilus, which has a mathematically remarkable shell instead of soft flesh), although many scientists believe they have other, as-yet-unknown biological usages as well. They mostly work in flashing waves of color that ripple along the outside of a squidder’s body, like this:

The circular units of chromatophores can also get bigger and smaller in size—it’s similar in appearance to the pupil of an eye reacting to light. Cuttlefish (remember, CUDDLE FISH, or “sea snugs,” if you will AND YOU KNOW I WILL) also have them, and are similar in structure to squid, the only difference being that they have a slight variation in their internal structure. Where squid have a thin internal support called a “quill” or a “pen,” cuttlefish have a stronger, bonier “plate” support. Also, cuttlefish are said to look slightly angrier expression-wise, which I can personally verify, having seen one snorkeling once. I was on a family vacation in the Caribbean and encountered a tiny cuddler guarding a cement block attached to a buoy floating on the surface of the water. Thus begins one of the cutest encounters of my life: I tried to swim up to it to get a closer look, at which point the five-inch-long babyguy started meanly darting at me to protect its turf!! It looked so mad. I mean, it was the best.

Although no aquatic creature can match the love I have for cephalopods, I also kind of have to give it up for crabs, especially this one: 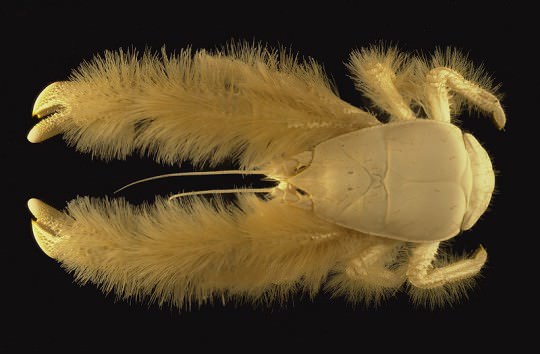 This is the yeti crab, also known as the “Hoff crab” because of its Hasselhoffian hirsuteness. When it was discovered in 2005, I became totally obsessed with it—a weird sea bug with the hairy arms and legs of an ’80s sitcom hunk? YES PLEASE! The Hoff crab lives in huge, crazy clusters surrounding hydrothermal vents, which Rachael can explain to you better than I can seeing how that is her REAL and ACTUAL job:

Rachael: Hydrothermal vents are caused by cracks in the ocean floor where lava heats up the surrounding water. The sulfur in these vents attracts weird sulfur-eating bacteria, which in turn attract animals that can eat sulfur-bacteria. Since the yeti crab is such a new discovery, scientists aren’t entirely sure how they fit into this ecosystem, but they have a wild theory: these crabs have been witnessed waving their hairy arms over the warm vents, and it’s speculated that they are actually FARMING BACTERIA in their hair to eat later. Sounds delicious…

All in all, it is a really intriguing species, and you have to love the well-humored scientists who gave it its Baywatchian name.

Rachael: Amy Rose and I could go on all day talking about ocean creatures, but we’ll shut up now. But if you know of any really cool or weird ocean animals, please share! There’s no such thing as too much ocean trivia! ♦