It boldly went where no one had gone before.

As Free As My Hair 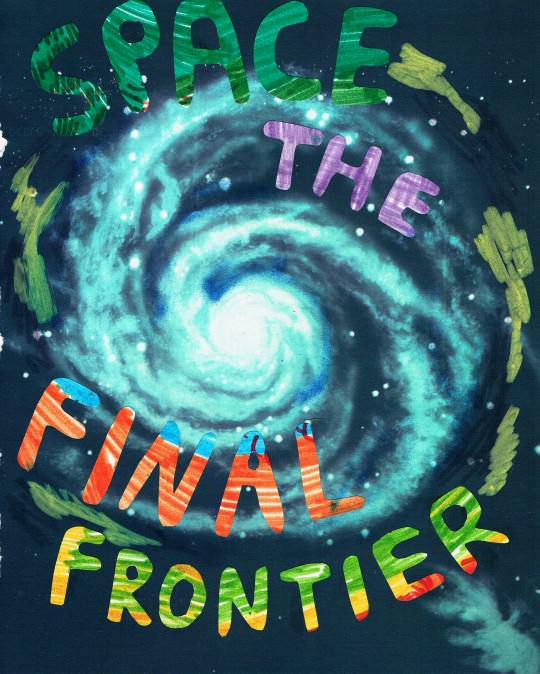 Stephanie’s Log. Star date 021907131990. 17:00 hours. Today the Milky Way unfolded in front of me. I watched a shooting star streak through the darkness, and studied the craters of the moon and the rings of Saturn. Then a spaceship appeared and a silky British voice began to narrate: “Space: the final frontier. These are the voyages of the starship Enterprise. Its continuing mission: to explore strange new worlds, to seek out new life and new civilizations, to boldly go where no one has gone before!” With that the ship lit up and whooshed away at warp speed and the music kicked in: dun-dundundun-dundundun! My world was officially rocked.

This is the log entry I might have recorded in sixth grade after my best friend Juliet* introduced me to Star Trek: The Next Generation. Since I was the kind of girl whose favorite field-trip destination was the planetarium, the intro alone sold me. Whenever I had dinner at Juliet’s house, we’d eat in the living room and watch the show with her grandparents. Juliet and I would recite the opening narration, purposely exaggerating the proper British pronunciation of “civil-i-zations,” and loudly humming along with the music until her grandpa got all, “OK, pipe down, you two.” But the opening credits are just the beginning of the awesomeness that is ST:TNG.

Let’s talk about the crew. First, my favorite, the man with the swoonworthy British accent: Captain Jean-Luc Picard. Yes, his head is as shiny and bald as cue ball, but just listen to him command “Engage,” “Make it so,” or my personal favorite, “Tea, Earl Grey, hot.” The voice! That take-charge attitude! Maybe it’s a little creepy that one of my first crushes was on a 60-year-old man, but Captain Picard was certainly more worthy of my admiration than the bad-boy types I would soon begin to fall for. Unlike Dylan McKay and Jordan Catalano, Picard is honorable, courageous, well read, and compassionate. I love watching him puzzle through a tough decision. He’s like Starfleet’s conscience, always considering the Prime Directive—the United Federation of Planets’ chief code, which dictates that there cannot be any interference with developing cultures—but occasionally violating it in life-or-death situations. Captain Picard got me interested in philosophy and had me thinking about the meaning of humanity in the episode “Measure of a Man,” when he argued that Lieutenant Commander Data, an android, was a sentient being. Juliet and I would always say that our present-day politicians could learn a thing or two from Picard, which led her to getting me this shirt once during an election year: 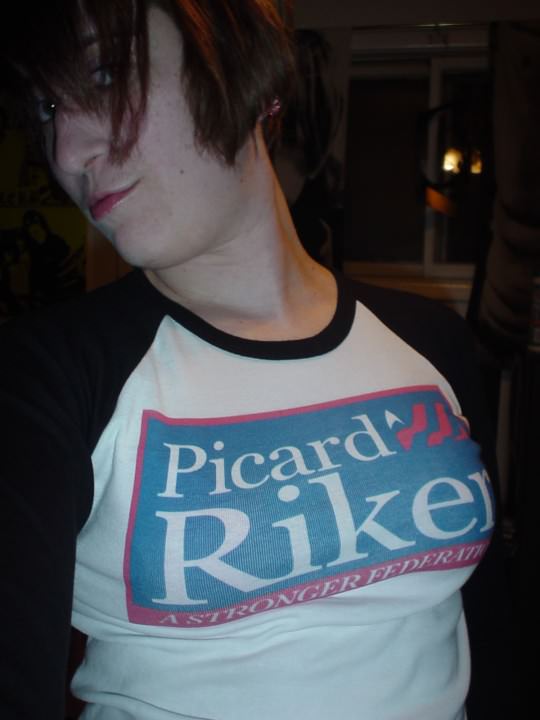 Data has always been Juliet’s favorite ST:TNG character. (“You’re in love with the old man!” “Well, you’re in love with the machine!” “At least neither of us is in love with the Klingon!” See what great inside jokes you and your friends can share when you’re Trekkies?) If Captain Picard is the conscience of the show, Data is its sense of humor—which is kind of ironic considering that because of Data’s design, he does not understand humor or any human emotion, and he also cannot speak in contractions. Some of the best moments on ST:TNG involve Data emulating human behavior. He tries to laugh, make jokes, gamble, go to therapy, and train his cat, Spot. There are also some incredibly sad moments, like in the episode where Data tries to build a daughter, but loses her to mechanical malfunctions.

The women on the crew, like Dr. Beverly Crusher and the half-human half-Betazoid Deanna Troi, are just as brave and active as the men. As an emotionally overwrought junior high student, I found it really empowering to see Troi use her heightened emotional awareness for good.

The range of stories told on Star Trek: The Next Generation—a blend of drama, comedy, action, adventure, and even a little bit of romance—is probably the best thing about the show. Two of my favorite episodes bridge season five and season six: “Time’s Arrow” parts one and two. In them, the crew time-travels back to 1800s San Francisco and meets up with Mark Twain and Jack London. If you’re a literature nerd like me (and Captain Picard), you will be in heaven. And since I am a literature nerd, my favorite recurring character is a villain that fits the trickster archetype perfectly: Q. He is always stirring up drama (and a lot of comedy with Captain Picard), starting in the very first episode of the series, “Encounter at Far Point,” which you can (and should!) watch on Netflix Instant right now!

Even though the Enterprise crew is out there battling enemies like the Borg, who want to turn everyone into robots, you don’t get the sense that a bleak dystopian future lies ahead of us. I love to daydream about the technology they have in the 24th century: the funky silver banana clip that Chief Engineer Geordi La Forge (played by LeVar Burton of Reading Rainbow fame!) wears to cure his blindness, the replicator that Captain Picard’s tea comes from, the holodeck where Data solves mysteries as Sherlock Holmes, and the teleporter that could have taken me to visit Juliet in an instant after she moved 90 miles away in eighth grade. But the bond that was sealed during many hours of ST:TNG marathons kept our friendship alive. And so I urge you and your friends to check out this show, the greatest in escapist TV and, literally, the best thing ever. ♦