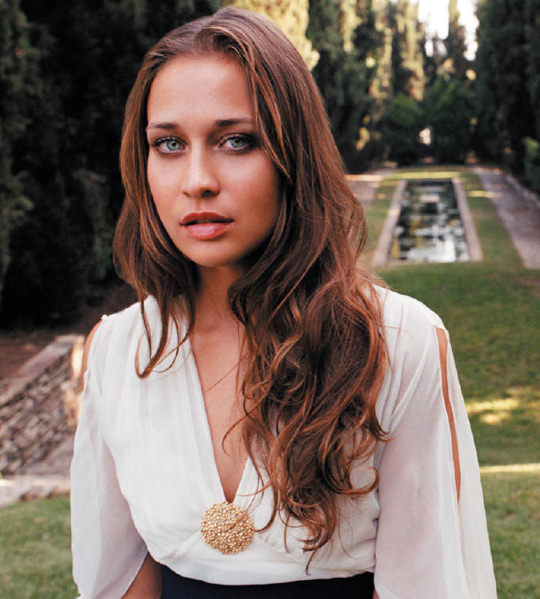 I love Fiona Apple. It’s true. For a while a part of me thought of her as a “guilty pleasure,” which, now that I think about it, really bums me out. Why would I feel guilty about loving her? Is it because sometimes I feel like she’s singing all the things that I can’t vocalize, because I’m afraid to admit that she gets me, because that would be revealing too many feelings, which isn’t something I really like to do?

Fiona’s first record, Tidal, came out in 1996, when she was just 19. At the time the press was freaking out about her skinniness and near-nakedness in the music video for “Criminal” (nothing that would happen today, really), but I didn’t see a girl trying to be sexual or seduce the audience. Yeah, she was hiding out in a closet and undressing in the kitchen, but her attitude was so sowhatwhocares that you couldn’t help but be enthralled by it. Like, if all you saw was the sexual element, then you were missing the point.

Fiona may have been a teenager, but she wasn’t singing about hanging out at the bleachers wearing T-shirts, and one imagines that she WISHES her problems were as easy as being the girl from the wrong side of the cafeteria. But they weren’t—her songs were about complicated relationships with boys, some that she manipulated, some who messed with her. Most songs about love are either about how much you love someone or how bummed you are that they left you; Fiona’s have always mixed love, hate, and loneliness in a way that feels true to the way real relationships work—twisted and a little screwed up in the end. Does that sound kinda pessimist? Whatever, it’s the truth.

The music that accompanies all these feelings is jazzy and moody, and her piano-playing manages to convey a perfect mix of haunting and dark and soft and angry and beautiful all at once. I was 11 when this record came out, and I remember listening to it the first few times and feeling intimidated by it, like everything that was coming through the speakers was too real for me to be allowed to hear, like maybe I was intruding in her personal life. I got over it, and soon it was all I listened to, especially on rainy days (or, you know, when your life SEEMS like an eternal rainy day).

And then there’s her VOICE! It is deep and soulful and serious and 100% not cute. It is probably my favorite voice ever? I just realized this as I wrote it. Yes. Fiona Apple has my favorite voice ever. And the melody she sings at the beginning of “The First Taste” is probably one of my all-time favorite melodies. It is soft and playful and sensual and totally dreamy. And it’s not only her voice, but the way she puts words together so that they undulate, mirroring in feeling what the words are actually trying to say.

When she won “best new artist” at the 1997 MTV Video Music Awards, she gave the brattiest acceptance speech of all time. Watch it right now, seriously.

I remember the feeling of excitement when her name was called, falling in love with her perfect white crochet dress, getting that hot shot that runs through your body when you know something’s about to go in a way it’s not supposed to. Starting out with a Maya Angelou quote, going on to add the memorable “this world is bullshit” line, making a quick stop to slam celebrity worship, and ending in the totally DOWNER “it’s just stupid that I’m in this world, but you’re all very cool to me, so thank you very much”? The speech was totally bananas, a trip through a teenage girl’s brain. She was mocked everywhere for it, of course—people are always picked on for being so bare and embarrassingly honest—but in reality it was her intensity and borderline cluelessness that made that speech a total MOMENT.

A few months later she was on the cover of Spin, aka “The Girl Issue.” Finding that on the newsstand felt like the equivalent of discovering the internet today. That picture of her will be forever burned in my memory: those big blue eyes, the faint smile, and mostly that totally secret bitchface that I suspect only other teenage girls could pick up on. Yeah, she’s on the cover and looking at you, but she’s not gonna SELL it to you, you know?

Then, in 1999, Fiona came out with a CD titled
When the pawn hits the conflicts he thinks like a king
What he knows throws the blows when he goes to the fight
And he’ll win the whole thing ‘fore he enters the ring
There’s no body to batter when your mind is your might
So when you go solo, you hold your own hand
And remember that depth is the greatest of heights
And if you know where you stand, then you know where to land
And if you fall it won’t matter, cuz you’ll know that you’re right 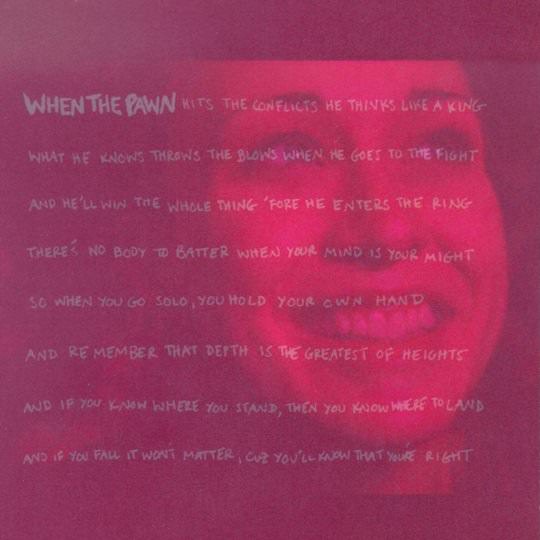 —or When the Pawn for short—and it became clear that she was kind of the best thing ever. Her attitude was still there, but her singing and songwriting were so much more assured and smarter than before. The record is way more upbeat than Tidal; it’s about realizing you’re better than everyone else and reveling in your mistakes and in the mistakes of other people (this sounds weird, but it’s oddly positive). My favorite song on this record changes every couple of months, depending on what’s going on in my life, but the one I fell in love with first was “Get Gone.” The piano is kinda menacing, as if to say I’M SO MUCH BETTER THAN YOU WHY AM I FREAKING OUT ABOUT THIS? It’s the perfect song to move on from a broken relationship and figure out that you’re awesome without him/her, especially when you are singing it at the top of your lungs and get to the part where she sings “Fuckin’ GO, ’cause I’ve done what I could for you and I do know what’s good for me,” because it’s like exactly what you’d wanna say, you know?

When I moved to New York after college I spent six months listening to this record and nothing but this record, day and night. Basically it was the STORY of my LIFE, and I wasn’t sure how I’d survive my daily routine in this new place without her voice in my ear. Was it a coincidence that this record came out when she was 22, and I was 22 when it became my oxygen? I don’t think so, and I don’t think it’s weird that I don’t think so.

Another very important thing to note about When the Pawn is that, in the video for “Fast As You Can,” Fiona puts out a match in her mouth, and to me it’s somehow become the most badass act ever captured in a music video. Something about her singing “my pretty mouth will frame the phrases that will disprove your faith in man,” and then putting out a fire with it—you know, it just MEANS everything.

Then there’s her third album, Extraordinary Machine, the record that almost didn’t come out and was saved by her fans sending a bunch of apple paraphernalia to her record label. It’s a departure from her other records in part because I think she really embraced her jazzy leanings, and the songs are really pared down and borderline theatrical. It’s almost like Fiona: The Musical!, which I mean in the best possible way. It took me a really long time to get into, mostly because I was too busy obsessing over When the Pawn, but really because I sort of didn’t get it. Then late last year, in the midst of massive life changes, the record just…clicked. The title track, “Extraordinary Machine,” became something like the national anthem in the country of my person. “Be kind to me or treat me mean—I’ll make the most of it; I’m an extraordinary machine,” she sings with a deliciously deranged happiness, and it echoed in my brain 24/7. “I’m an extraordinary machine” is also a good daily affirmation, if you’re into that sort of thing. Then there’s “Not About Love,” in which she assures us that “she is not in love” in the same way you tell your friends that you’re not really into so-and-so anymore when inside you still die every time their name is mentioned. It is a temper tantrum in song form, and the way she bangs on the piano just makes you wanna kick stuff around your room while you sing along to it. Basically, there isn’t an emotion that she is incapable of capturing.

Fiona’s energy is intense and amazing and oh-so-REAL.* It’s an essential part of life. My friend and I used to drive around and sing along to her songs at the top of our lungs, and it was a total bonding experience. We were sharing with each other and feeling less alone in the world, but also, singing out loud is the #1 reason to have a car, really. I’ve still never seen her live, but I know that that will change, and that when I am face to face with her, I will probably break down and cry. Out of happiness, but also some sadness (because some feelings will be too much). In the end it will be a magical time. Fiona Apple is magic. ♦

* Speaking of “oh-so-REAL,” there are three of her songs that I never listen to because they break me down: “Sullen Girl,” “Love Ridden,” and “I Know.” Listen at your own risk.