What I learned from Lindsay Weir.

How to Apply Fake Eyelashes 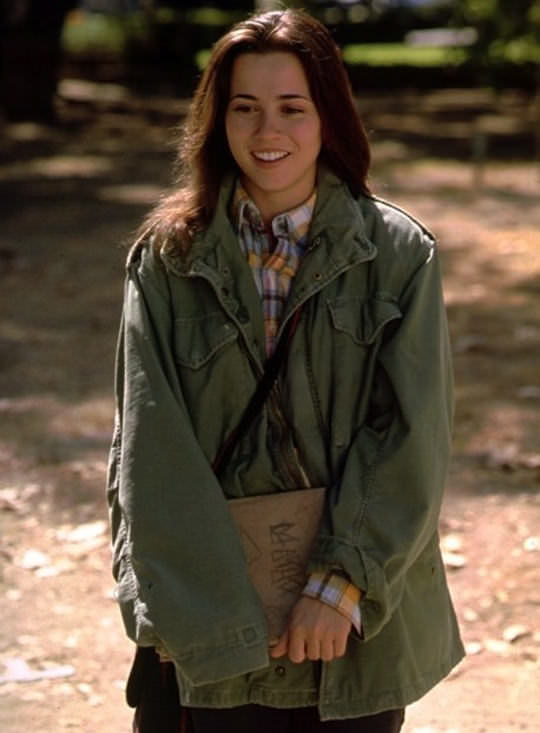 In the show Freaks and Geeks, it’s never clearly explained why the main character, Lindsay Weir, my personal hero, traded in her cardigan for an army jacket and started ditching class to hang out with stoners. At one point, her little brother Sam comes into her room and asks, abruptly but not out of nowhere, “Why are you throwing your life away?” Lindsay pauses before telling Sam that she was alone with their grandma when she died and had asked her if she saw anything right before it happened, “a light or anything,” and her grandma, someone who’d been “a good person all her life,” said no.

Maybe Lindsay, a star student and lifelong rule-abider, figured then that all of her efforts to do right by her family and her teachers had been for nothing, that if there was no reward at the end like she’d thought, she might as well try to have fun. Or maybe she was just exploring.

These here precious (groan) teenage years are meant for change and for testing out being a human in the microcosm that is school and your friends and your house before you have to go be a human in the world outside. It’s natural and healthy to try out different identities and go through phases. What worries me is the resentment with which I look back on the person I used to be. These multiple versions of myself, they’re everywhere. They’re at family gatherings and the houses of old friends, in photos on our fridge and online, in my closet and in my now-embarrassing collections of books and movies and music.

And at school. Oh, god, school. As you navigate the halls during those first days of a new school year, eager to adopt a new identity, you’re instead met with sad, bitter reminders of your old one, and as you recognize people who knew you at a time when you were less nice/cool/interesting/smart/attractive, you panic a little bit. They do the same, and so an unspoken pact is made through uncomfortable glances and half-smiling nods. It is understood by the time October rolls around: we will never talk about who we used to be.

Which is kind of sad, and scary. None of those versions of myself, when I really think about it, were nearly as mortifying as I make them out to be, and I’m sure my classmates’ weren’t, either. But it terrifies me to think that if I felt as sure in who I was a year ago as I do about who I am now, it means that, in another year, I’ll be sure about some new version of myself, and everything I’m currently latching on to—all of the songs that I think I could listen to forever and all of the friends whom I deeply trust—could mean nothing.

“It all comes back. Perhaps it is difficult to see the value in having one’s self back in that kind of mood, but I do see it; I think we are well advised to keep on nodding terms with the people we used to be, whether we find them attractive company or not. Otherwise they turn up unannounced and surprise us, come hammering on the mind’s door at 4 AM of a bad night and demand to know who deserted them, who betrayed them, who is going to make amends. We forget all too soon the things we thought we could never forget. We forget the loves and the betrayals alike, forget what we whispered and what we screamed, forget who we were.”
—Joan Didion, “On Keeping a Notebook”

Lindsay Weir’s geek hammers on her mind’s door multiple times throughout the rest of the series, but the finale (SPOILER ALERT!) is so good because Lindsay doesn’t end up fully falling into the freak role or going back to the geek role, but instead gets into a painted van to follow the Grateful Dead with a group of friends, most of whom she’s just met for the first time. And for a moment you’re like, “DID THE PAST 18 EPISODES NOT MEAN ANYTHING TO YOU?!” And then you recognize the maturity with which she says goodbye to her family and Sam’s friends, and you realize that she’s shaken hands with her former geek self. And you see her approach the van with the same uncertainty that she had when she started hanging out with troublemakers Kim Kelly and Daniel Desario, but also with a confidence that took her the whole series to find. And you realize that this show wasn’t about a good-girl-gone-bad either losing or finding her true identity. It was about a girl realizing that she could give herself permission to explore and change, and as the van drives away and the show’s credits start to roll for the very last time (tear), you know that this was only the beginning.

“You know, Lindsay, when you started hanging out with them, I felt kinda bad for you, because I thought you were gonna turn into a dirtbag. But then I realized that you were just exploring, and now I guess I’m kind of exploring, too.”
—Millie Kentner, Freaks and Geeks

That’s what it is. It’s just exploring. Hanging out with different friends, taking different classes, joining different clubs, getting into different music or wearing different clothes: the important thing isn’t figuring out who exactly you are and your sole purpose in life THIS VERY INSTANT. It’s just knowing that it’s up to you the same way it was up to Lindsay Weir. In the meantime, all you can really do is find the things and people you relate to at the moment and hold them close. Somewhere, among the hair dye bottles and sleepover souvenirs and doodled-on paperbacks, you’ll find parts of yourself that you know will be sticking around. ♦