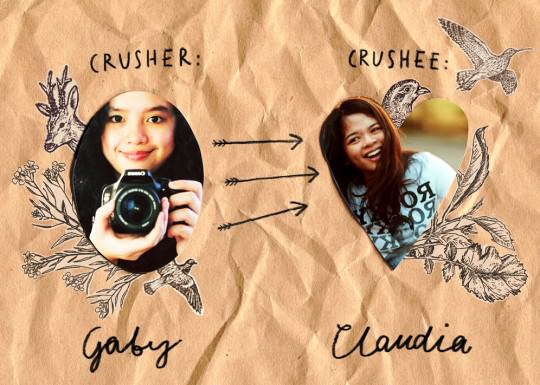 Gaby sent us this FC nomination about once a week for a month. We loved her persistence (though we are NOT encouraging this technique!) and, when we talked to these two, we fell in love with them and their friendship. They are honestly each other’s biggest fans and supporters, and talking to them is just really uplifting and will make you want to call your own bestie right away and gush at them (we ARE encouraging you to do this).

My name is Gaby, I’m 16 years old, and I live in the Philippines. I’d like to nominate my friend Claudia for Friend Crush, because she is, hands down, the coolest person on the face of the planet.

We met when we both got jobs as media producers at the student council at our school. I was a shy junior who had never been part of any school politics, and Claudia was a senior who had already been in the student council. But we instantly bonded over an array of things from how hot we thought Julian Casablancas was, to how no generation of Skins could ever beat the first. We would gush about music, fashion, books, TV, the things we wanted to do, and the places we wanted to see. There are very few friends in life who just get you and speak the same, weird-ass language you do, and I’m glad to have found that friend in Claudia.

She is also one of the most talented, hardworking people I’ve ever met. She takes amazing photographs (check out her work at http://www.flickr.com/photos/claudiamarie) and she never fails to come up with great ideas to solve problems. Claudia is my Friend Crush because she is her own person—she has inspired me to stop caring about what others think and expect of me. She has encouraged me to try to get out of my comfort zone and step out into world, and for that I am eternally grateful. All in all, I love her to death, and it makes me sad to know that I’ll have to say goodbye to her in a few weeks.

Claudia’s graduating high school (and leaving me behind!) this March. We’ve only known each other for a year, but I already consider her as one of the best friends I’ve ever made in my life. I’ve been thinking of ways to let her know how much she means to me before she leaves for college; she’s a Rookie fan, so I figured, what better way to do so than by nominating her as Friend Crush!? I really, REALLY hope you put this up this March, because it would mean a lot to me to show you and all your readers how awesome Claudia is and how much of a pal she’s been to me.

ROOKIE: Where in the Philippines do you live?

GABY [crusher]: I live in a city called Las Piñas.

What does “las piñas” mean?

I think it means “the pineapples.” Either that or “the palm trees.”

I like the idea of saying “I live in the pineapples.”

Yeah, it makes me feel like I’m on the SpongeBob show.

So tell me what’s so great about Claudia.

Yeah, we were both waiting to be interviewed for the job. I thought they were only gonna take one of us, so I looked at her and was like, This girl is my competition. I wonder what she’s capable of. I didn’t like her—I thought she seemed like a bitch. I had no idea we were gonna be partners, and then when we did get paired up, she turned out to be pretty cool!

What does a media producer do?

Basically we get told to make posters and designs and T-shirts and stuff—anything that the president wants us to do for the council.

Was there one moment when you realized that you liked Claudia?

She had her interview before I did. When she came out, this one friend of hers was like, “How was it? Did they make you dance?” and Claudia was like, “Nah, it was easy,” and she just took off. I was like, Ooh, what a badass.

You said in your email that she’s inspired you to stop caring what people think of you. How did she do that?

I used to look at my work right before turning it in and be like, “Oh, this is crap.” And I wanted to ask people, “Is this OK? Is this OK?” But Claudia told me that if I felt something was good, if I was content with something that I’d made, I should just go with it.

How did she inspire you to get out of your comfort zone?

I don’t really go out that much, to be honest. I’m more of the stay-at-home-and-read-a-book type. But lately so many good bands have been coming here—like Toro y Moi and the Pains of Being Pure at Heart—and she was the first one to nudge me and ask if I wanted to go out and see them. I felt pretty scared at first, ’cause I’ve never been to like a real gig before. She was like, “No, you should go! It’s totally fun.”

Have you gone to a show with her yet?

Also, when we were working on our art and stuff, I had one particular style that she thought I stuck to for a long time, and she opened me up to all these different resources that made me want to change the way I made stuff.

What was your style before, and how did it change?

I used to use a lot of fonts and premade vectors when I made designs. I didn’t really rely much on the fact that I can draw. I mean, drawing’s sort of my shtick. So Claudia was like, “Why don’t you draw these posters? That’s what you’re good at.” She encouraged me to be more illustrative, I guess. [Laughs]

Yeah, I have a Tumblr: gabycantdraw.tumblr.com.

Hold on, I’m gonna look at it right now.

What if I’m like, “Oh god. These are terrible.”

Oh wow! You drew these?

Do you think you and Claudia will stay close after she goes to college?

I really hope so. Because you know how friends just depart even though they say they won’t? I really hope that doesn’t happen with Claudia, because we’ve formed a really tight bond. Every time we talk I realize we have something new in common. I hope that continues. She already graduated yesterday, and we talked last night, so I think we’re off to a good start in preserving our friendship.

How far away is she going for college?

Well, technically she’ll still be living 15 minutes away. But she’ll be up north a lot—she’s going to college near Manila.

Oh! What? Dude, this is gonna be easy. I thought she was moving far away!

But it will be harder to see each other now that we’re not going to the same school anymore.

Do you have a strategy in place for how you’re going to keep your bond strong?

I guess keep chatting, and keep texting her about random stuff, and she promised to take me out to more gigs. She swore to that. I hope she keeps her promise. Not a lot of the bands that I like come over here very often. I hope more of them do. Especially the Strokes.

Have they ever played there?

No! Sadly. We are not worthy of their awesomeness.

Well let’s just lay down the gauntlet right now. Julian Casablancas, if you have a Google Alert on your name and just found this interview, go to The Pineapples and play a show.

Is there anything in particular I should ask Claudia about when I call her?

Um, what do you love about Gaby?

ROOKIE: Gaby said that when she first saw you, when you were both applying for the media producer job for the student council, she took one look at you and decided you were a bitch.

CLAUDIA [crushee]: [Laughs] Oh my god. I thought she was unapproachable too!

I love that you were both intimidated by each other.

I had actually heard about her before that. I knew she was printing T-shirts, and I thought they were really good. I’m intimidated by people who are better than me. [Laughs] And I was intimidated by her, yeah.

She also told me that you guys bonded over a bunch of loves that you share, and that one of them is Julian Casablancas.

Oh my god—his hair, his voice, his EVERYTHING. Aaaaaah! Everything!

[Laughs] He is really cute.

I like the way that his lips touch the microphone while he sings, like he’s making out with the mic.

OH GOD YEAH I LOVE THAT.

How were they when you saw them live?

It was AMAZING. It was kind of new for me because people don’t really go that crazy at shows in the Philippines. But in the UK everyone was pretty wild. They were all drunk and crazy. It was really really fun. The band sounded amazing, and the set list was SO GOOD OH MY GOD. They played all the songs that I wanted to hear.

And you also bonded over your love of the first season of Skins. Which is also my favorite season.

The first season, right? Nothing matches that.

Do you have a favorite character?

I love her too. My favorite, though, is season-one Effy, back when she wasn’t talking.

But Effy’s kind of a bitch.

But I like teenage bitches. It’s why I’m friends with Tavi. (Don’t tell Tavi I said that.)

[Laughs] I’m a huge fan of Tavi and of Rookie. I love Rookie so much! I read it every day.

Yay, we love you too! So, what do you love about Gaby?

OK. [Deep breath] I love her hair, I love the way that she talks. When she talks in council, you have to listen to her, even though she’s not pushy at all. She’s a really good friend. She keeps my secrets. She listens to me. She can relate to me in a lot of ways, and when she can’t relate, she tries to. I think that’s really really nice. This has never happened to me before—meeting someone who I can relate to completely and I’m completely comfortable with. We actually became best friends in a year.

Have you thought about how you guys are going to stay tight after you start going to college?

Yeah, we already have a plan. Every time a band comes to play here I’m going to invite Gaby. That’s the way we plan to stay close—by watching shows together and hanging out.

She is gonna love her first concert.

Yeah, she will. Imagine if her first is the Strokes! Oh, god. She’d die.

Is there anything else you want to tell the world about Gaby?

OK. Gaby is the most amazing person you’ll ever meet, and a lot of people say that, but this time it is actually real. If you meet her, cherish her, give her food, and love her. ♦

To nominate your own beloved pal for a future Friend Crush, please send your names, ages, and pictures, and a paragraph or two explaining what’s so freaking great about her, to [email protected], and write Friend Crush in the subject line, please.