Owning Up to Weird Obsessions

You are large, you contain multitudes. 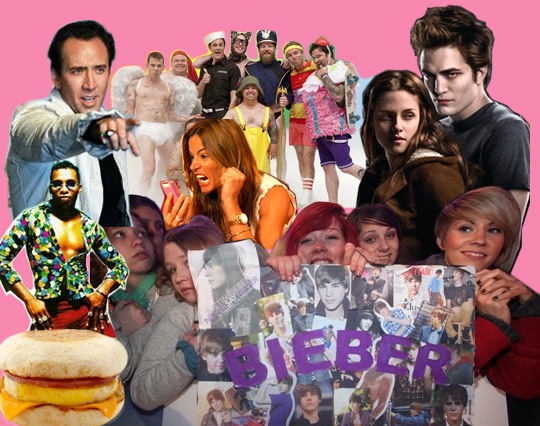 I have a lot of feelings when it comes to the things that I love; it’s just my nature! I can talk passionately for hours about why Hot Topic is really one of the best stores ever and how Prom was, literally, a great movie. I might insist, maybe a bit forcefully, that you MUST google pictures of watermelons with roses carved into them or that you should watch the Real Housewives of New York City episode when Kelly flips out on Bethenny because she thinks Bethenny’s trying to kill her. It’s so crazy, I LOVE IT! I’m also in love with the TV show Jackass, Haddaway’s “What Is Love,” anything that ever happened in the ’80s, and the infamous feud between John Adams and Thomas Jefferson, among many other things.

None of these things is a “guilty pleasure”—I don’t think anyone should feel guilty about feeling pleasure—and I do not like any of these things ironically. To like something ironically is to say, “This thing that I like isn’t actually cool, so I’m just going to say that I’m liking it ironically to maintain my hip and alternative cred.” I don’t really understand this mindset, yet I hear people projecting it a lot. I think that a lot of people are reluctant (or possibly just afraid) of being completely frank about what they love, in case someone else tells them that that thing is lame, and therefore they are too.

What is a guilty pleasure anyway? Should anyone feel guilty for loving The Jersey Shore or Egg McMuffins? Is there some official document that declares what’s respectable and what’s trashy? NO! That document does not exist! That’s because nobody can tell anyone what’s cool or interesting, because “cool” and “interesting” are in the eye of the beholder, and that’s you. You get to decide what’s cool, and when you’ve decided, you’re right.

When I see a screaming group of Bieber fans on television my first instinct is probably to make fun of them, because I’m a heartless person like that. But then I’ll stop and realize that these girls have some serious passion. They are showing true love for Bieber. They are shedding actual tears over this gentleman! I’ve never shed a tear for a musician ever! I see every Twilight movie in the theater on opening night for the same reason. There is nothing more exciting than being surrounded by people who are freaking out collectively about a piece of culture. I might not think the Twilight books are masterpieces, but I completely respect the love that the fans bring to each opening. They aren’t afraid to shout their love from the mountaintops in the face of a culture that deems the books literary trash. And they emphatically don’t care what I think.

Another thing, though, that a lot of people really like is fitting other people (and often, tragically, themselves) into neat categories like indie or preppy or emo or nerd. But why would you want to reduce people to stereotypes? When you reduce people to one-dimensional stereotypes, you limit the way you see the world, and limit your LIFE! In reality, people are BEAUTIFUL MULTIFACETED GEMS, and if you like Best Coast as much as you like One Direction, that’s great! And, more than that, who cares?! People who care about that are scared of your LAYERS. They want you to be easy for them to understand, but you are large, you contain multitudes.

“I started to think of my favorite bands as part of my identity. That only got more intense as I got further into high school. I bought so many band pins. They meant so much to me. THIS is who I listen to! THIS is their official logo,” said Fred Armisen in the Rookie article about getting through freshman year. These days on top of band pins we have Pinterests, Tumblrs, and Facebook profiles dedicated to telling people about the people, music, movies, animals, food groups, etc., that we love. There are SO many opportunities to tell people that you’re madly in love with Nicolas Cage or Van Halen. Take advantage of these opportunities! Tell people about your obsessions, no matter how weird or lame other people may think they are. Make shrines dedicated to your admirations. Cry hysterically over how beautiful that painting is. Treat yo’self to loving without fear of judgment. If people make fun of you, ignore them. They just obviously can’t understand REAL PASSION! I feel bad for them. ♦