Don’t kill your idols. Take comfort in them.

Celebrity culture has given us so many awful things—too many to name, and everyone has named them already—but there’s also a positive side to famous-people worship. Sometimes, when you need life inspiration, the most accessible examples are, paradoxically, the most distant and inaccessible human beings. The stars are so far away that they look perfect, twinkly, unflawed. We can use this! All of us have, at one time or other, REACHED FOR THE STARS for inspiration in our lives. Here are some of our personal star crushes&#8212women who have been guiding lights when we needed them most. 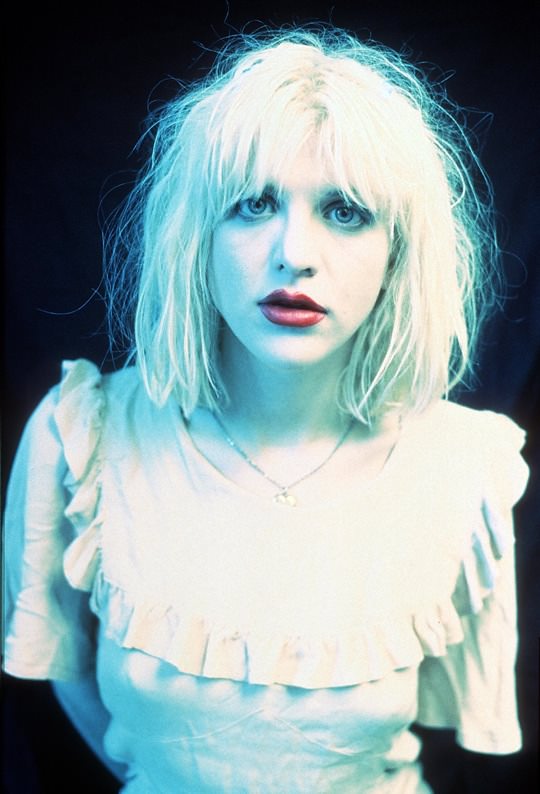 I discovered her in seventh grade, at a sleepover at the house of a friend with a cool older cousin who was always exposing us to the best music, like David Bowie and Nine Inch Nails. But the best musical discovery passed down to us was a band called Hole—in particular their lead singer. On the front of the cassette tape, she was washed out, her blonde hair and her skin as white as her baby-doll dress. Above her head was the album title: Pretty on the Inside. Those were the words that she chanted in the last song on side B: “Is she pretty on the inside? Is she pretty from the back?” Over the next two wretched years of junior high, they were words that I chanted in my head whenever I was being taunted by the boys and girls who were pretty on the outside. I dreamed of having her strength one day, the strength to scream beautiful broken poetic words at the top of my lungs like Courtney Love.

I remember seeing her on the cover of Sassy kissing the cheek of my other recently discovered idol, Kurt Cobain, and thinking how lucky she was. Not because she married a really cute rock star, but because I could tell they were two kindred spirits. Two people who had probably been outcasts, freaks like me, who made beautiful noise, and they’d found each other. It gave me hope that someday I would find my own kindred spirit.

Two years later, when he killed himself, she comforted me. I was 14. I was depressed like he obviously was, and when he died part of me was scared that even if I learned to scream like they did, it wouldn’t be enough to save me. I was glued to MTV in the days following his death. I watched the vigil for him at the Seattle Center, where they played a recording of her reading his suicide note. She told the crowd to chant “asshole” at him. “Call him an asshole and tell him that you love him.” I did, and it felt good. It felt right to be angry and sad and full of love all at the same time. Courtney understood what it was to have that whirlwind of emotion and how to channel it. Four days after he died, her record Live Through This came out. I’d been excited about it before, but I went out to buy it for comfort. “I’m not psychic, but my lyrics are,” she would say in an interview five months after his death. “If you live through this with me, I swear that I will die for you,” went her lyrics. It was bone-chilling. It was also Truth. Every single word on that album was Truth and Life and Death. I played it obsessively. I gave it to everyone I knew.

I saw her live for the first time less than six months after Kurt died. Hole opened for Nine Inch Nails. They came on late. She was high. I knew because I was in love with a junkie myself at that time, so I could see the signs: the stumbling and slurring that seem to occur in slow-motion compared with someone who is simply drunk. There was some asshole in the crowd who held up a sign saying that read “Courtney killed Kurt.” I wanted to beat the shit out of him for her. She didn’t respond, though she would, loudly and angrily, at other shows. At this one she just put on a gorgeously messy performance that she ended by howling out her version of “Where Did You Sleep Last Night?” and smashing the microphone onto the stage repeatedly before hurling herself into the crowd and letting them tear at her. She got it, how I felt on the inside, the pain that clawed at my lungs and punched at my ribs. I had no words for it, but she had both words and actions. She was my catharsis.

We had to write a massive paper in English class during my sophomore year, and I wrote one comparing my two heroines, Courtney Love and Sylvia Plath. They were both mothers, both poets, both tormented, but Courtney had lived and Sylvia had given up. I didn’t judge Sylvia for that, but my respect for Courtney only grew, even though more and more people were calling her a whore and an addict, were judging her parenting and her failings as a wife, accusing her even of her husband’s death. I saw her as a survivor, and surviving is complex. In the course of surviving sometimes you fuck up. Sometimes you fuck up a lot. But through it all Courtney kept making that incredible music.

My boyfriend and I watched her on MTV Unplugged. We were on the phone, not in the same room, because he was grounded, as usual. I said that her short lace dress was gorgeous. He said, “Of course you think so—it’s slutty.” Instead of crying, I listened to her sing. I recorded that Unplugged performance and I listened to her version of “(He Hit Me) And It Felt Like a Kiss” over and over when that guy and I broke up. Courtney helped me realize what he was, and then she helped me survive it. I listened to Pretty on the Inside and Live Through This and a couple of bootlegs I’d found that my ex had said she sounded horrible on, strung out and bad—he tried to diminish her gleaming power because it would diminish mine.

I wrote my own poetry while I listened. It was mostly bad rip-offs of her and Sylvia, but I bound it all together and took it to a Hole concert two days after my 16th birthday. It was Lollapalooza. Through sheer luck and perhaps good karma for standing in the cold at six AM the day tickets went on sale, I’d landed front-row seats. At the end of the set, I threw my poetry zine onto the stage, hoping it would reach Courtney the way she’d reached me.

The Lollapalooza tour was the first time I really saw Courtney’s flaws. It came out that she’d punched Kathleen Hanna, the singer of Bikini Kill, another heroine of mine. That made me feel sort of sick, but I reminded myself that I didn’t know the story and that Courtney was human. Even though to me she felt like all of my favorite women from Greek Mythology rolled into one—wise Athena, mother Demeter, Persephone who went to hell and back, and Medusa, and the Furies, too—she was flawed. I accepted that about her. In fact in some ways it made me love her more. She didn’t fake it while she worked out her demons in the public eye. Though those demons were often ugly—unraveling on Letterman, letting a stranger lick her breast at a Wendy’s, punching fans and people I admired, falling into addiction after it seemed she had it beat—she embraced them. Seeing her do so taught me to embrace mine and begin to tame them, make them into art the way she did with hers on all of her albums and in her movie roles.

The poetry I wrote eventually turned to stories, and 15 years after I’d hurled my zine at her, I finally met her. It was my 31st birthday, and I drove down to St. Louis from Chicago because Hole was playing there that night, and my friend Jenny, who lived there, got my love of Ms. Love in a way few of my other friends did. She was willing to wait with me in the alley behind the venue after the show, hoping for a glimpse of her.

After we’d waited for over an hour, Courtney came outside, looking tired and demure in a pair of black-framed glasses. She walked over to greet the group of 20 of us who were still waiting. She worked her way down the line, signing things. When she reached me, I asked, “Courtney, can I give you a present?”

“What is it?” she replied, looking somewhat uncertain.

“A book, one you inspired me to write about a girl rock star,” I said, handing my first published novel to her. “I thanked you in the acknowledgments.”

She studied it, beaming, then said, “Wow, this really cute!” She read the back, noting that it was published by MTV Books and that I had my MFA. “What are you doing here?” she asked, as though I was too good to be waiting a St. Louis alley for her.

“It’s my birthday and I wanted to see you.”

She thanked me, warmly and graciously. I waited to scream out of sheer joy until we were back in Jenny’s car. Who knows if Courtney ever read the book or if it got lost on her tour bus somewhere, but hopefully she did find that part in the acknowledgments that reads: “The first time I heard Courtney Love scream that she was ‘pretty on the inside’ it saved my angry, teenage girl soul.” Writing was my way of learning to scream, and I couldn’t have done that without her.