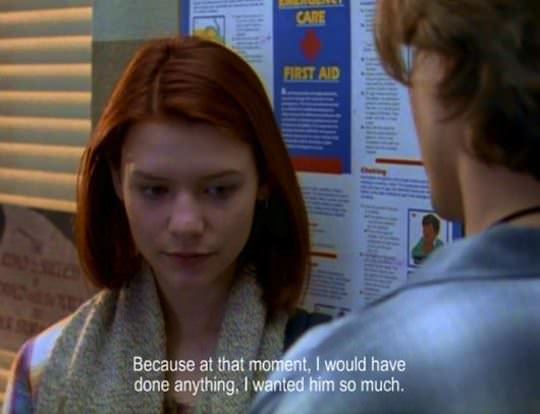 Victor, Nate, David, Pablo, Rudy, Andre, Jesse, Nick, Marcus, Danny, another David, Zach, Matt, Dave, Mike, and Michael. These were my high school crushes. Statistically, you’d think that at least one of these people would have reciprocated my feelings, but none of them ever did. This probably wouldn’t have been such a terrible thing if I’d just kind of casually liked these guys, but I was fanatically devoted to each and every one. The following three crushes were the most intense of the bunch.

Name: Nate
Grade: Senior
Height: 5’11”
Most Memorable Trait(s): His exquisite little mustache
Year(s) of Crush: Freshman year
’90s Slow Jam Played on Loop During Crush: “All My Life” by K-Ci & JoJo
The Run-down: In middle school, I had an almost fetishistic attraction to boys in band, specifically trumpeters and trombonists. I played the flute, and I got my jollies whenever one of these preteen Casanovas released the saliva from his spit valve onto the back of my Adidas. But as soon as I started high school my attention shifted, and I suddenly loved basketball players (or the more colloquial “ballers” or the more colloquial-er “ball-uhz”). Though I’d been a fan of ’80s teen movies since I was 11 years old, I was somehow completely oblivious to how hackneyed this new preference for jocks was and pined for Nate—who was one of the stars of the varsity team and a local celebrity—unironically. Of all the guys that I’ve ever loved, Nate’s head was by far the most meticulously groomed, what with his perfect mustache and his even more perfect fade. He also had the calf muscles of a Ninja Turtle. I trailed him through the quad with my friends/apprentice stalkers and though I never did get close enough to actually confirm it, I decided that he smelled like CK One and baby lotion. Nate was so out of my reach that, despite obviously wanting him to return my affection, I was ultimately content with simply fantasizing about him.
Misguided Attempt at Flirting: While I was doing warm-up exercises with the rest of the girls in my P.E. class, Nate wandered around the gym. Just in case he looked my way, I made sure that my sit-ups and jumping jacks were flawlessly executed, because obviously people who excel at basic calisthenics are irresistible. I can only assume that he didn’t see me, because if he had we’d be married by now.
Crush Highlight: At the end of the school year, I plucked up the courage to ask Nate to sign my yearbook. Actually, I plucked up the courage to ask a friend to ask a sophomore girl she’d gone to elementary school with who was a friend of Nate’s to ask Nate to sign my yearbook. The sophomore took my yearbook to him while he was in the weight room at the back of the gym, out of sight, wailing on his abs or his glutes or something. I wasn’t delusional—I didn’t think that I’d get my yearbook back and find a declaration of love. I didn’t know what to expect. The two of us had never shared any meaningful moments, unless you count breathing the same air as someone who’s in the same general area as you as meaningful. (What would he write? “Dear Amber, you inhale oxygen and then expel carbon dioxide well. At least I’m guessing you do, since I don’t know who the hell you are.”) I waited about 15 minutes (15 minutes!) for the sophomore to return with my yearbook. When I opened it up, this is what it said:

’Sup
Keep it real with your peeps.
N8

Ah, the profundity! I can’t remember 75% of the advice that I’ve been given in my life, but these sage words are not only written in my yearbook, they’re written on my heart.

Name: David
Grade: Freshman (at the start of the crush) and sophomore (when the crush ended)
Height: Only slightly taller than I was
Most Memorable Trait(s): His large-ish nose
Year(s) of Crush: Freshman-sophomore years
’90s Slow Jam Played on Loop During Crush: “Nice & Slow” by Usher
The Run-down: David and I were in the same grade but didn’t have any classes together, so all I really knew about him was that he was beautiful (for the entire first year of the crush I didn’t even know what his voice sounded like). He wore a gold cross around his neck, had this wonderful bump on the bridge of his nose that I dreamed of kissing, and there was a Robert De Niro mole on his cheek that I found very erotic. Our school had a strict uniform policy and, at least for me, that made romance kind of Austenian. I remember once seeing him at the end of the day with his polo shirt untucked and thinking that that was so incredibly sexy.
Misguided Attempt at Flirting: I wrote him a secret-admirer note. Exactly what I wrote, I can’t recall, but when I slipped the piece of notebook paper into his locker, my entire group of friends was with me, I guess for moral support. With my permission, a friend of mine teased David about knowing who his secret admirer was. When she told him my name, he didn’t know who I was. When she pointed me out, he was indifferent.
Crush Highlight: Desperate, I bought a “teen witch” book and tried to cast love spells on him. When that didn’t seem to be working, I asked my mom to take me to a metaphysical store called Ancient Ways to get a “come to me” candle. I burned that thing every night and eventually IT WORKED! Can you believe it? Well, you shouldn’t, because it didn’t work.

Name: Danny
Grade: Junior
Height: Medium-ish
Most Memorable Trait(s): Sincere smile, raspy voice
Year(s) of Crush: Junior year
’90s Slow Jam Played on Loop During Crush: “Cupid” by 112
The Run-down: Danny used to say hi to me whenever we passed each other in the quad. When I was walking with friends, he’d single me out. “Hi, Amber,” he’d say. So, of course, I fell in love with him. But, really, the whole school loved Danny. He was on the junior varsity basketball team, but because he wasn’t an especially great player, he’d only be put into a game for the last minute or so. If the game was winding down and the coach still hadn’t called him off the bench, everyone in the bleachers—self included—would chant, “Danny, Danny,” until he got to play. It was like the movie Rudy. Inspirational stuff.
Misguided Attempt at Flirting: I revealed my crush to a close friend of his who thought Danny would “go for me.” Bolstered by that encouragement, I wrote Danny one of my trademark loose-leaf-paper love memos (I’d composed about six of these while I was in high school and none of them had been effective), concluding it with the imperative: “Score a basket for me.” That last line makes me ill for all of the obvious reasons, but also because I’d been on the women’s varsity basketball team since I was in the 10th grade, so I was perfectly capable of scoring baskets for myself. I personally handed Danny the letter—a sign of my growing maturity—and was certain that I was going to have a boyfriend by the end of the day.
Crush Highlight: Waiting for basketball practice to begin, I walked outside of the gym and was pleasantly surprised to see Danny standing there with Phil, his best friend. Neither of them had noticed me. Glee quickly turned to horror when I saw that Phil was holding the letter I’d written. “Score a basket for me,” he whined. Danny was laughing. Good timing, Amber. Smoooooth as usual. ♦