My Life With Justin Timberlake 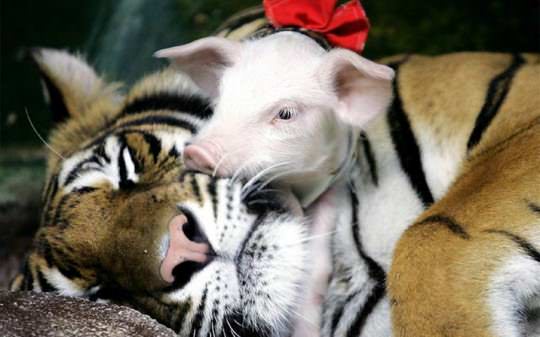 Every decade has its definitive pop-culture love stories. During the last one, these were often found in romantic mumblecore comedies starring people like Michael Cera, the human-male equivalent of a nervous newborn bunny. This, to me, indicates a strong desire on the part of the American public to associate love with nonthreatening adorability.

That hasn’t changed over the past few years, but now, instead of watching lovey-dovey scenarios being acted out by “quirky”-seeming celebrities in movie theaters, I’m more likely to turn to a smaller screen—my computer. Who doesn’t immediately forget about everything in life besides the beauty of LOVE when faced with a video or news-website puff piece about members of two different species who are, somehow, best friends? To me, obsessing over YouTube clips of unlikely interspecies partnerships is more meaningful, touching, and compelling, because it’s REAL. Seriously, which story of surprising motherhood would you rather spend time cooing over: Juno, or this amazing article that Phoebe sent me about a tiger mama raising some piglets—who, by the way, are wearing little tiger-striped jackets?*

I’ll give you a minute to compose yourself after clicking on that link. In fact, I’ll even understand if you have to go back and look at it about 12 more times to get it out of your system before we continue on here, because you need to be properly mentally prepared for THIS:

Why yes, that IS a video of polar bears and dogs snuzzing and playing with one another! Skip to the 1:40 mark if you want to WATCH THEM HUG (and come on, you know you do). What I wouldn’t give to get right in the middle of that snugpile. Videos like the last one are especially good because they show animals who are usually inclined to hate/eat/fear each other overcoming their differences in order to roll around and be best friends. If they can do it, I think you can probably talk to the dreamboat in your math class. I mean, he’s not even your natural predator or anything.

The holy grail of these videos, of course, is when two baby animals find a common bond. Just take a look at this one of a fawn and a kitten, uh, “making out,” as the vaguel -creepy description of the video says. I’m basically pretty sure it’s what the softest, most idealistic part of my heart looks like:

How can something so perfect exist in this world? It’s got to be the power of love, you guys. When I see two different species getting together and adoring each other this way, it makes me believe. I don’t think I’m alone in this—these videos tend to have hundreds of thousands of views. The love for animals who love each other tends to transcend gender, ace, ethnicity, and all the other categories that we sometimes rely on to define ourselves and one another. In fact, I would go so far as to say that looking at these boundary-breaking (yeah, I said it) animals can unite us as people, at least in terms of having something that most of us can agree totally rules. It’s not often that you can find that kind of thing. In that same spirit of liberation, we should all take a lesson from this NYPD horse patrolling Occupy Wall Street and his or her little doggie civilian pal and love each other regardless of our social positionings. (Do you like these barely disguised attempts to intellectualize my unstoppable urge to squeal over animals on the internet?)

Even if you’re not on board with my radical ideas of cute viral videos being the great human equalizer (I’m starting to consider running for office on the strength of this political platform), it’s hard to deny the universal charm of interspecies love. This Valentine’s Day, you probably can’t go wrong with watching a few examples of that incredible, heartwarming phenomenon. If they can do it, we can too. ♦

* Which we later found out was a HOAX. Thanks, commenters, for setting us straight! We still stand by the cuteness of the picture, though.