Literally the Best Thing Ever: Hoarders

This show makes me look at my cabinet full of canned pineapples differently.

Not Creepy At All

Have you seen Hoarders on A&E? It’s excellent and amazing. And terrifying and painful. Each hour-long episode makes a visit to the homes of two different people suffering from chronic, compulsive hoarding. Mostly they’ve acquired massive arrays of random household items, although sometimes someone will have what resembles a specialty, meaning they particularly collect little boxes or dolls or cars or, um, rats. In every case, these people’s lives have become unmanageable, their houses have been damaged, their families have been gravely impacted, and the hoarders are facing enormous consequences such as eviction or losing relationships with their loved ones. 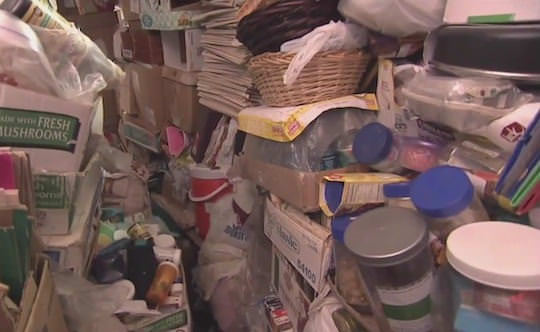 An episode of Hoarders will often include:
• yelling
• crying
• human and/or animal waste
• cats

At this moment, some of you might be thinking that I’m a really terrible person. Clearly, as a fan of Hoarders, I am revealing myself to be a total voyeur who likes to watch TV about other people’s misery. I would argue that you are only partially correct. It’s true, I do take a deep interest in the extreme turns that these people’s lives have taken and I have been known to indulge in a small laugh now and then at things I’ve seen on the show, like when Glen, the aforementioned rat enthusiast, said, “I’ll readily admit that I have too many rats.” 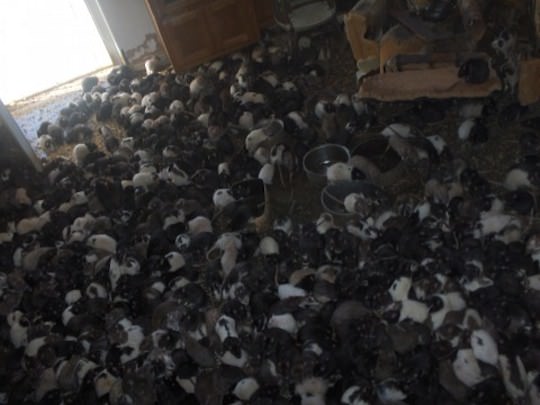 But there are times when I am genuinely moved by what goes down. Like when Richard finally came out as a gay man to his siblings after years of hiding? Or when seven-year-old Alex turns out to have developed hoarding tendencies just like his mom? I cried. See, this is a well-rounded program.

Not to mention that sometimes the people called in to help the hoarders are genuinely talented and helpful. In every episode there are some cleaning professionals who get involved, as well as a therapist. One of the regulars on the show is Dr. Robin Zasio&#8212a therapist who specializes in compulsive hoarding. Dr. Zasio kind of reminds me of what Barbie might be like during her second career: a little older, a little wiser, but still always dressed in a coordinated outfit. Here she is counseling a family in Illinois looking a little like Ski Jump Barbie: 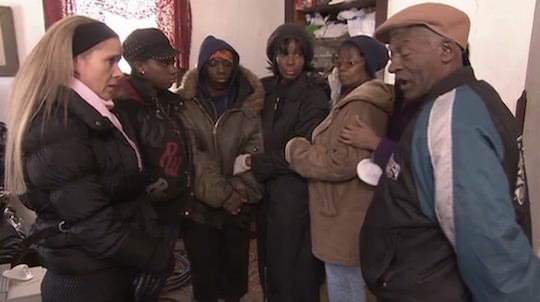 If Barbie grew up to become someone who changed people’s lives by throwing out their urine-soaked cardboard boxes, everyone would be proud of her! Anyway, one of the amazing skills that Dr. Zasio has is her ability to remain calm and collected when coming into a hoarders house for the first time. I would imagine that it takes quite a bit of talent and composure to step inside a home&#8212and when I say step, I really mean climb because usually these abodes require scaling a junk mountain&#8212that is often filthy, usually reeks of poop/rotten food, and is overwhelmingly crowded. Yet she always addresses the resident with respect. Deep down, she’s GOT to be thinking, Get me the frick-frack outta here! I love to watch Zasio in these glorious moments of self-control.

The professionals on the show have infinite patience for their charges. The hoarders rationalize every item, every pile of paper, every flattened, dead cat. Do they really need to keep that nine-pound box of bottle caps? Yes. They will eventually build that bottle-cap tower they’ve always wanted. Zasio and her colleagues are compassionate and calm as they listen to the hoarders and try to ease them down off of their bottle-cap-keeping ledges. It looks like a hard job. And it’s very admirable and kind.

But the main reason this show is so close to my heart is that it speaks to the little hoarder in all of us. We do all share that, right? Or is it just me? Check this out&#8212here is a seemingly benign picture of my kitchen: 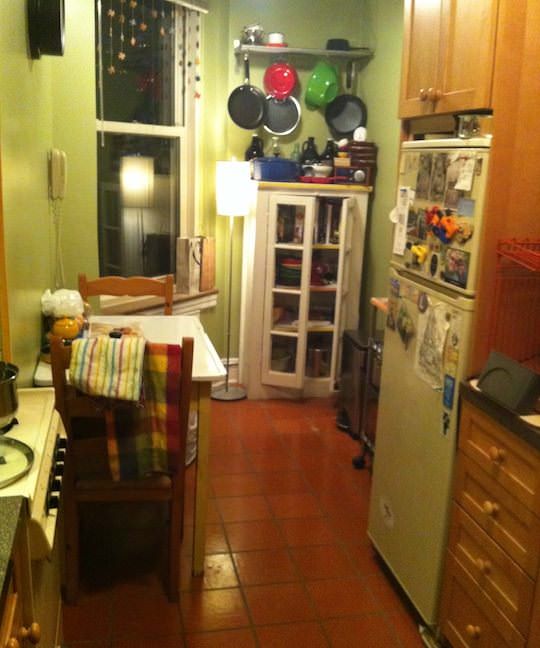 And here, a seemingly benign picture of one of my cabinets: 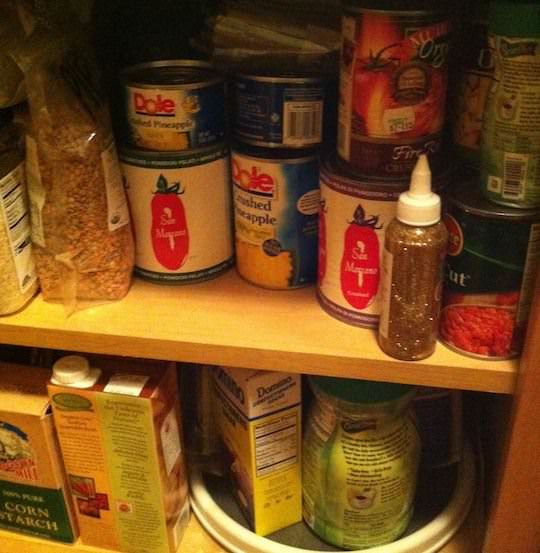 Inside view is looking pretty normal, as long as we agree to ignore that rogue bottle of glitter glue in with the food products. But then, look a little closer…what’s that behind the lentils and canned pineapples? 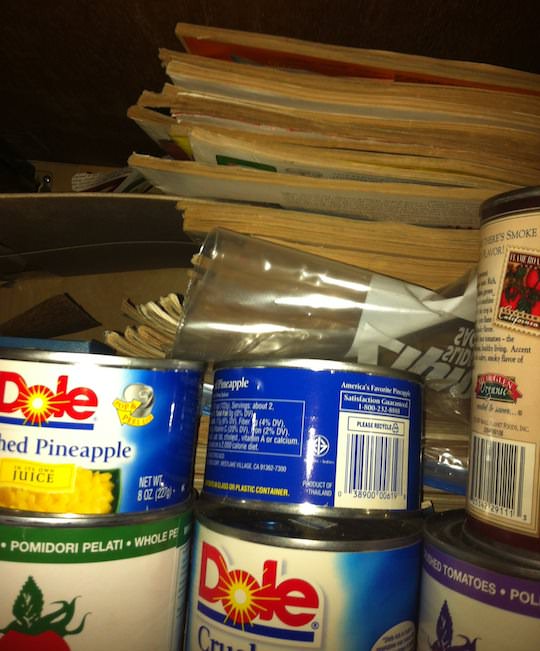 So, anyway, in one of my favorite episodes, Arlene, a Hawaii native, is living in her house with her husband, BUT there is no room left in the house for her husband. He has to sleep in the car. And to make matters worse, he has a terrible case of scoliosis that makes his back very hunched. Arlene’s hoarding is probably some of the most impressive I’ve seen on the show&#8212she has piles of things all the way up to the ceiling and is constantly living with the threat of being crushed by her teetering belongings. 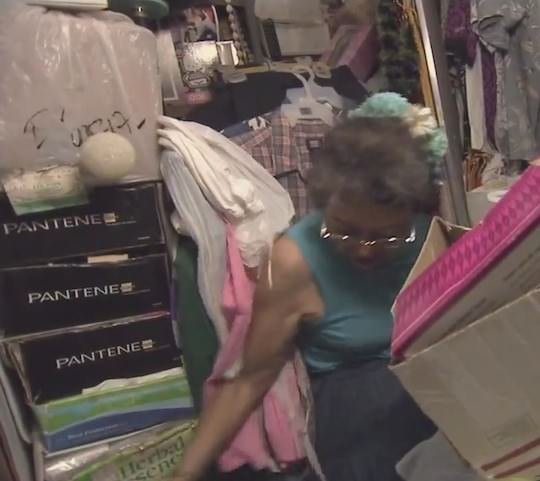 Even though her situation is particularly desperate, Arlene is not really able to let go of her possessions. There is a really interesting/funny/sad moment in Arlene’s story where she is pressured by the therapist to find ONE item in the sea of junk to throw away. She responds with frustration and outrage: “You want me to go look for something now!?” The fact that she’s standing in front of a pile of trash is lost on her. It’s baffling and maddening and fascinating to watch. I sit and take it in, with my own tiny hoarder sitting on my shoulder. We are rapt.

Basically, being a compulsive hoarder is like feeling, deep down, that EVERYTHING is literally the best thing ever. If that’s the case, can we really blame her?♦

Lucy Wainwright Roche is a musician. When she’s not on the road, she lives in Brooklyn.