Literally the Best Thing Ever: Degrassi

This is why we watch TV: to learn. 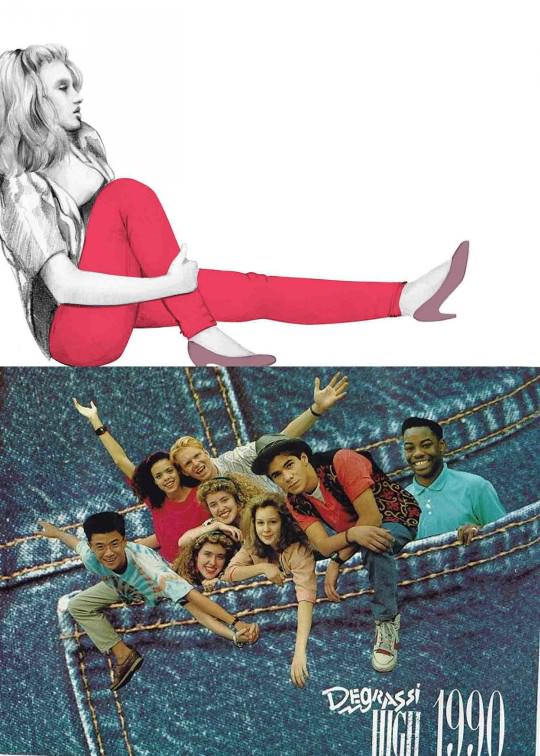 Above: popular student Stephanie Kaye, by Kelly Smith. Below: the Degrassi kids coming out of a JEANS POCKET.

Why is Degrassi literally the best thing ever? Where do I even begin? It feels impossible to explain the phenomenon of Degrassi to the uninitiated.

Full disclosure: as a Canadian teenager, I watched this show in its first run. Fresh. Basically, I grew up alongside these kids. I probably should have been on the show (I was in drama club). This is why it’s so hard for me to explain the phenom in language. Degrassi is like a sacred tome. Metaphor is out of the question. I’m going to feel my way through this.

When I say Degrassi, I’m talking about CLASSIC DEGRASSI that aired between 1987 and 1991. It was an award-winning program for teenagers that was filmed in and around the multi-cultural city of Toronto and aired on the Canadian Broadcasting Corporation’s TV station. Degrassi is a World Happiness Dance that was shown in 40 countries by the late ’80s. Over time the stars got older, of course (that’s the thing with time), so the title morphed from Degrassi Junior High to Degrassi High. The series was acclaimed for its sensitive and realistic portrayal of teenage life. No teen-related topic was left untouched. And I mean NONE: shoplifting, homophobia, child abuse, drugs and alcohol, teen pregnancy (Spike was a 14-year-old mom), adoption, abortion (the twins!), divorce, depression, learning disabilities, bullying, sexual harassment, sexual abuse, death (BOTH of Wheels’s parents were killed by a drunk driver) eating disorders, environmental issues (ACID RAIN!), sexism (always), suicide (in the boys’ bathroom!), terminal illness, and so forth. 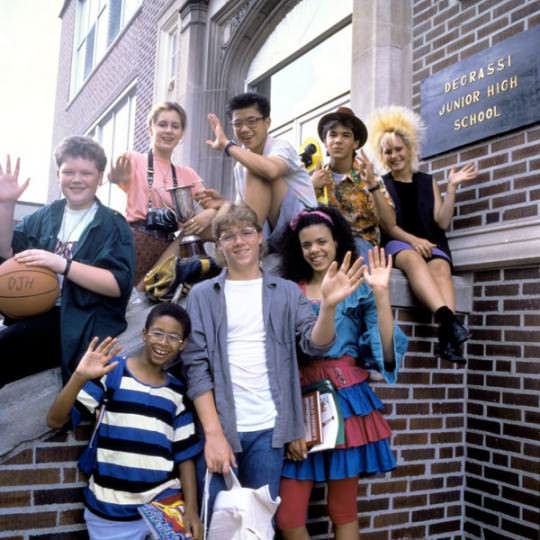 HAIL HAIL! Some of the gang is all here! Wave back!

Degrassi is REAL. The actors were nonprofessionals. One of the creators was a real-life teacher. These kids weren’t really acting—they were just growing up, zits and all. And the zits were a-plenty for all the world to see (some of the kids were even in a band called Zit Remedy).

Degrassi can be used as an adjective. If you say, “That’s SO DEGRASSI!” it can mean many things. For me, it means something that is earnest, innocent, and lame rolled into one big ball.

Speaking of speak, I love how the kids talk with a special tone of voice reserved especially for When Standing Up For Oneself—which they do always and often. The tone is a blend of contempt, anger, victim, and “screw you,” spoken from the heart. It’s pretty much the entire show. (But Spike is the master of it.) It’s safe to say that possibly these Learning Lesson Moments inspired every one of Jerri Blank’s realizations. This is why we watch TV: to learn.

Degrassi is EDUCATIONAL. I can’t believe what they were able to pull off. In 1990, the show really stepped it up and did a two-part episode on HIV/AIDS titled “BAD BLOOD” (of course). You know, I’ve been watching the show for half my life and I’m still learning from it.

Your head might be spinning off its axis after several back-to-back episodes, but that’s just…life at DEGRASSI! If the A plot ever gets too heavy-handed (and does it ever), plot B or plot C will have a ridiculous situation comedy being acted out by lovable dorks and nerds (e.g., toilet-papering Mr. Raditch’s front yard) to cheer you right back up.

Above all, Degrassi practices FEMINISM. In 1990, Lucy made an early feminist horror film on her video camera. She was sick and tired of women being the victims, so she made her killer a lady (played by Caitlin). It is quite possible that it is the first feminist horror video made by a TV teenager in the history of the world.

“EVERYBODY CAN SUCCEED, ALL YOU NEED IS TO BELIEVE, BE HONEST WITH YOURSELF, FORGET YOUR FEARS AND DOUBTS. COME ON, GIVE US A TRY, AT DEGRASSI JUNIOR HIGH!” See? The whole message is right there in the theme song. 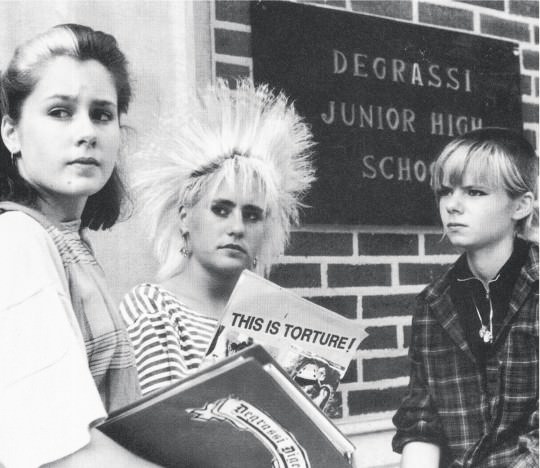 Degrassi wears a mood ring. It is like life itself: everything, all the time. It is bad, good, amazing, dorky, embarrassing, hilarious, poignant, bleak, and sometimes shocking. Degrassi is a universe unto itself, an institution. I hold this institution near and dear to my heart, and, like all great art, you just have to experience it.

P.S. Melanie was my favorite character. She’s like the dorky version of Molly Ringwald from the first season of The Facts of Life. If you don’t already know, then you need to figure out your favorite Degrassi character. Your answer will unlock the secrets of the universe…and YOURSELF (because Degrassi TEACHES).

P.P.S. Stephanie Kaye pretty much ruled the show. Unfortunately she quit after the first two seasons. 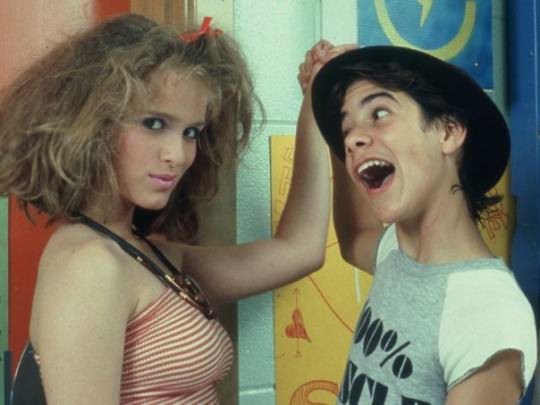 Stephanie Kaye and Joey Jeremiah! At your service!