It’s OK to Hate Your Hero

Conan O’Brien is a jerk (in my dreams). 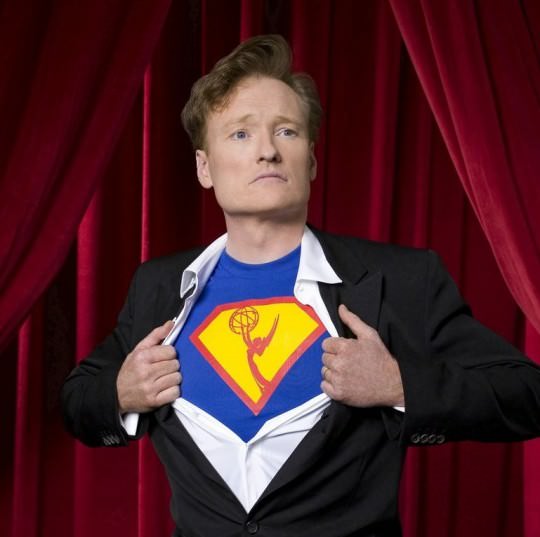 Why so cruel, Coco?

Conan O’Brien snubbed me in an airport restroom once, in a dream. Of course, it was me but it wasn’t me, and it was him but it wasn’t him, and since when did airports start having coed bathrooms, because that’s an idea I really can’t get behind. Because if men find out we poop they take away our power.

I awoke the next morning confused and sad, but mostly just sort of angry. How dare he just walk away without saying hello! Especially after I handed him a paper towel—when TWO Dyson hand dryers were free. An ass and environmentally unconscious!

Granted, this was all just a dream. And I’d like to think if I did meet Conan O’Brien in an airport bathroom, he’d say hello. Or at least “What are you doing in the men’s room? I’m calling security.” But the intense reaction I had to this imagined negative encounter forced me to realize I could be a hero-hater.

A hero-hater, of course, as defined by Doctor Professor Beautiful Shelby Fero, is “someone who turns against a hero—as defined by Stupid Ugly Merriam-Webster—due to a poor meeting or encounter.”

I was really uncomfortable with this realization. Who wants to be a hater of anything, after all, except of Nazis and puppy-haters? But then I thought about it, and I finally came to the conclusion: it’s OK to hate your hero.

As I’ve recently undergone a procedure to replace the fibers in my brain with Sour Punch Straws, I’m working at about 0% capacity. That means lists!

1. Great!
So you finally meet your hero. Maybe it’s after a show, or at a signing, or even a chance encounter at your favorite diner. You’ve just taken a bite of your bagel and lox when you look up and see HOLY SHIT it’s your favorite actor/comedian/musician.

“OHMMMGORHD,” you gasp, mouth full of delicious, delicious bagel and lox. Swallowing quickly, you’d plan your next move. After settling on a nonchalant but still a little chalant approach, you say hello. And they say hello back. And you chat. And they’re just as nice or funny or charming as you’d hoped. Maybe more so, even! Great!

2. OK!
So you finally meet your hero. Maybe it’s after a show, or at a signing, or even a chance encounter at your favorite diner. Suddenly you see your favorite actor/comedian/musician. You plan out your strategy. After settling on a cool but not too cool approach, you say hello. And they brush you off. Or turn out not to be as nice, funny, or charming as you’d hoped. But oh well, it went OK.

3. Bad!
So you finally meet your hero. Maybe it’s after a show, or at a signing, or even a chance encounter at your favorite diner. Suddenly you see your favorite actor/comedian/musician. You decide you’re gonna play hard to get but not too hard to get. You say hello. And they ignore you. Or insult you. Or throw things at you. And this is bad!

Today I’ll be focusing on dealing with BAD encounters. If you’ve had an OK one that you’re angry about, I’m sorry. And will be handling it in my next article. “It’s OK to Be Indifferent About Your Hero.”

If you’ve been a victim of a bad hero encounter, it’s fine to be angry. But before you get angry, read this next part. So I take it back. It’s not OK to be angry until you read the next part. Unless you’re not reading this at all. Then be angry!

Contextualize where you met them. Was it in a professional setting, where the person in question was well aware they’d be subject to people? Was it in an airport, where they may be rushing to catch their flight for a book tour they might not even want to do but their agent promises will be great for sales? Where someone chooses to be rude says a lot about their character. If Chase Wrangler—MY fictional hero (he bakes AND hikes!)—is rude at a press conference, maybe it means he’s anxious or sullen. If he’s rude at an airport, maybe it means he cracks under stress. Maybe it all means he’s just an asshole. The coolest thing about being let down is that you learn something new. If I’m going to give my time and money and emotions to someone, I want to make sure I’m getting the full 360-degree picture.

My older sister shocked and confused me the first time I invited her to hang out with some comedians I knew she liked and admired.

“No, thanks,” she said, before returning to her quesadilla.

”No, thanks?” NO, THANKS? I wanted to slap that delicious cheesy snack out of her hands.

“I don’t want to know who they are,” she said. “I like their work. That’s all that matters. Pass the salsa.” I sat there stunned. It’s so unimportant to her who the people “really are.” If she happens to meet someone she admires, and it goes great, then great! If it goes badly, well then, who cares? It won’t make their routine about butts any less funny. (As if butts COULD be unfunny.)

And that’s just it: the only person who gets hurt is you. Masochistic tendencies aside, the bottom line is: if you’re not willing to risk hating your heroes, don’t meet them. Because what if they don’t accept your beautiful gift of airport-bathroom paper towels and thusly reveal themselves to be a big jerk? If you do run into them, and they snub you, though, remember that time you were a big jerk to your aunt at that wedding just because you were mad at your mom because she wouldn’t let you wear your WTFWJD T-shirt (IT’S IRONIC) to the event. And maybe cut them some slack?

IMPORTANT NOTE: disregard if your hero turns out to be a Nazi and/or hates puppies. Only the devil “doesn’t get the appeal” of a puppy. ♦