The Five Stages of Fandom Grief

I’ll get over it. Right? 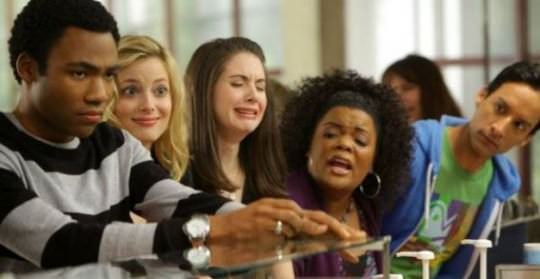 The five stages, as personified by my buddies Troy, Britta, Annie, Shirley, and Abed.

Oh, hi! I have some sad news: MY LIFE IS OVERRRRRRRR. Oh, I mean, everything’s going well. But, you see, I had a favorite show. That show was NBC’s Community. It had everything! Good-looking people; an appealingly awkward feminist; super-dorky pop-culture riffs for super-dorks; an elaborate in-show parody of Doctor Who. (OK, the third and fourth items on that list are the same thing.) And then people didn’t watch it enough, so it got put on indefinite hiatus. Which is TV code for “I think we need some space.” You’re breaking up, but the other person and/or TV channel is not telling you that, because you might start crying in the restaurant.

Now, it makes no sense for an objectively awesome person such as myself to feel that her life is awful, just because a TV show is currently not airing. And yet! This is common. Because loving things: it has its downsides. One of those is that all good things must come to an end, and when something leaves you before you’re ready to say goodbye, you go through all the stages of grief, sometimes cycling through them over and over until you latch onto something new to love irrationally. Those stages go like this:

Example A: “There’s no way Community is going to be cancelled. This Alison Brie .gif got like a zillion reblogs.”
Example B: “Fantasy is mainstream now! That’s why all of my dates love it when I talk about Magic: The Gathering!”

So: you like something. Good for you! I, too, have known the thrill of a pop-cultural romance. But, here’s the deal about liking things: not everybody likes those same things. They can be the best things in the world, but that will still be true. I have watched far too many people zone out during the searing post-apocalyptic drama of Battlestar Galactica because, and I quote, “it’s about spaceships.”

This is hard to do if you are in denial, either about the unpopularity of your fandom, or about the right of other people to enjoy different things. What you see, when you log on to your Tumblr, is a soul-exposing microblog, using the postmodern artistry of .gifs and witty one-liners to compose searing cultural criticism. What everyone else sees is the following:

Dude! I get it! I, too, like Amy Poehler. But we must honor Amy Poehler, and the dignity and style with which Amy Poehler conducts herself, by reserving our thoughts on her for special occasions. Because, if we do not, we lead ourselves straight into…

Example: “The corporate fat cats at NBC have proved that they don’t care about good, smart, original programming! Also, Alison Brie .gifs! I HATE YOU, PROFESSIONAL TELEVISION BROADCAST COMPANY. I WILL NO LONGER PAY TO WATCH YOUR PROGRAMMIoh wait…”

Friends: I have written about a lot of controversial topics. I have written about sexual assault, abortion, various kinds of discrimination, how much girls rule and how this compares in re: boys drooling, and my problems with one or more U.S. presidents. I want you to listen when I tell you that I have never—ever—gotten meaner internet feedback than when I said I didn’t like a science fiction or fantasy series.

This is another exciting part of liking something: you get to feel like you alone understand it, and defend it against everyone else. It’s a special relationship, and you protect it. But sometimes you’re not protecting; you’re attacking. Fan rage is a real and terrifying thing. In sports, people have literally killed each other over not liking the same teams. So, when you find yourself composing your 12th Tumblr post of the day entitled “YOU DON’T LIKE AMY POEHLER ENOUGH YOU JERK,” take a step back. And realize that you are one step away from soccer hooliganry. Amy Poehler is a wise and beneficent influence upon us all. She would not want hooliganry conducted in her name.

Example A: “#sixseasonsandamovie!”
Example B: “Yes, I know that we were only supposed to send apples to Free Fiona that one time, but it’s been years since that album came out! Fiona needs me!”

Among qualified grief professionals, such as myself, the bargaining phase is known as “the really pathetic part.” OK, it is only known as that to myself. And I am not a qualified grief professional, also. But bargaining is the part where your brain stops working according to the known laws of space, time, and sense-making. It’s the part where you keep calling the dude or lady you’ve broken up with, attempting to finagle your way back into that terrible relationship, even though they are already dating your sister. It’s the part where you give yourself a haircut with safety scissors because your cat died and HAIRCUTS SOLVE EVERYTHING. It’s the part where you’re broke, but if you just bought an entirely new wardrobe with your savings, you would FEEL like you had money. And it’s the part where you send apples to a record label to make them release an album. Or take out an ad in the paper to save Firefly.” Or start a petition, after your favorite character on a TV show dies, to make the writers somehow un-kill that character. (IT WAS HIS CLONE.)

That can be good! That can work! Keep tweeting #sixseasonsandamovie, that might actually do something! But sometimes it doesn’t. And you have to know that, and not believe that your tweets are magic tweets that control the world. Because here’s the really gross part, about bargaining. When it doesn’t work, and you’re not prepared, you get to visit…

Here are some things that are awesome: Honest enjoyment. Caring passionately. Being sad sometimes. (I know, that last one doesn’t sound great, but have you ever met somebody who doesn’t let themselves get sad? More often than not, those people get angry.) You can do all that, as a fan.

But what you can’t do is get so bound up with something that it becomes yourself. This sounds goofy, I know. Who actually gets that sad when a TV show goes off the air, or a band breaks up, or a book series ends? Who needs me and my pop-psych pep-talks to get through that? Well: I have. People do. I’ve told you that I sometimes get angry feedback from people, when I don’t like what they like. Often, I find no apparent reason for it! Those people are just being jerks! Humankind is a mystery in that way! But the feedback I get that I actually understand, and empathize with, goes as follows:

These people are sad. Or they were sad, at some point. They were getting picked on in school, so they had a part of every day where they weren’t going to that school: They were going to Hogwarts. Taylor Swift knew about feeling like they’d met someone they completely, uncritically adored, and were just totally beneath that person’s notice. They were lonely, or they were hurt, or they were just frustrated with how things worked out sometimes, like everybody. Anything or anyone that genuinely helps you get through a hard time deserves your loyalty. And will almost certainly get it. So when that thing goes away…

I know. It really sucks. But the fact is, everything ends. The sun will go supernova, the Earth will be incinerated, generations will be born and generations will die, and before all that happens, people will leave, friendships will break up, pets will run away, and TV shows will get canceled. And weirdly, this sentence is supposed to help you deal with depression, because: things end, and once you know that, you know you don’t end with them. Everything comes, and everything goes, and you just let it pass through, and try to be grateful. Also, buy the DVD sets. If enough of you do that, it turns out you get a movie.

Example A: “Much like Abed coping with the unexpected and brutal end of Cougarton Abbey, I’ve decided to find a new favorite show. God. Community. That was a great show, you know?”
Example B: “Ultimately, what matters is not the 11 crappy albums this band has released, but the three really good ones that they made at the beginning of their career. Also, the fact that I’ve suckered you into attending this concert. THREE-IN-ELEVEN CHANCE OF FUN! WOOOO.”

Acceptance is boring. It doesn’t actually feel like anything. It seemingly has nothing to do with the rest of all this stuff: The obsession and fan rage and frequent visits to Bummer Town. You’re not even thinking about the object of your obsession, when acceptance hits. You’re watching something else. You’re finding something else to do. You’re reading the Hunger Games trilogy, and all is well.

It’s a beautiful thing, actually, to leave the dark side of fandom. You like things, but they’re not who you are. You enjoy yourself, but you’re not going to be traumatized if you don’t get to enjoy yourself in the exact same ways all the time. You aren’t a “fan,” you’re a person who likes stuff. As a wise TV show once said, “I guess I just like liking things.” And if I do not get more quotable adages along these lines, MY RAGE WILL KNOW NO LIMITS, but, you know, that’s beside the point. The point is: it’s great to like things. And you do, because you’re great. Just, you know, before you get too into it, make sure you know which friends can’t stand spaceships. ♦