Why you should never, ever, ever (EVER) fake an orgasm. 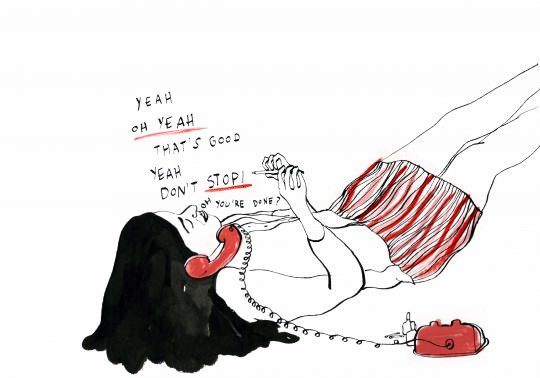 Can I put a few more evers in there for good measure? As you can probably tell, I feel rather strongly about this.

Depending on where you’re at in the wonderfully exciting sexual journey of your life, you may be thinking, Hey, what are you talking about, lady? I don’t plan on faking an orgasm ever. However—trust me—at some point, you will be tempted to do so. I’m happy to say I have never faked an orgasm in my life (and I’ve had a whole lotta life), but there have been moments when I’ve seriously considered it—for the reasons below.

Here’s why you will feel the need to fake an orgasm:

3. You will feel guilty. “He’s spent AGES down there! His tongue’s going to drop off!”

4. He will make you feel guilty (not necessarily intentionally). “But my last girlfriend had six orgasms in a row when I did that!” (You may not be the only one faking it.)

5. You will want to make your partner happy. “I’m not that bothered, he’ll be thrilled, it’s not such a big deal.”

6. You know you’re not going to have one. There comes a point when you know it’s just not going to happen no matter what he does, because the moment has passed. (That happens a great deal more easily with us than with men.) But he’s still going, DETERMINED to “make it happen.”

7. Enough already. The moment has passed big time. To the extent that (yes, this is possible) it’s getting boring. You actually really would quite like to roll over and go to sleep now. BUT….he’s still going.

Here’s why you should never, ever, ever—etc. etc. etc.—ever fake an orgasm:

1. You are cheating yourself of real orgasms. Once you have a fallback position that stops you from exploring ways to have a lot of fun together where you both/all get to come, you’re going to use it. Every fake orgasm = one less genuine orgasm.

2. You are letting down other girl-women. You are condemning every woman he goes on to sleep with for the rest of his life to be a victim, in her turn, of “But my last girlfriend had six orgasms in a row when I did that!” syndrome. Don’t do that to us. Teach him what really works.

3. It’s not fair to him. He really does want to know how to make you come, for real. Guys do. Help him—by telling him what you’d like him to do, what you don’t like him doing, where he should be doing that thing you really like him doing, and how gently or not, and how fast or slow. Don’t you want to know what really works? Wouldn’t you resent someone’s lying to you about it? Same goes for him.

4. It’s not fair to you. Faking anything in life isn’t a good idea. It’s not who you are! Be who you are, be real, and get the real orgasms you deserve.

I’m telling you all this because one of my beliefs in life is, always start as you mean to go on. Embarking on your sexual life can be fraught with doubts and worries, for all of us. But the one thing that I KNOW you will never regret is insisting on your own pleasure, because otherwise you are setting yourself up for a shitty bunch of years before you come to your senses and go “WHAT WAS I THINKING?!” But: you are young! You have the amazing chance to get it right, right from the very start. Both you and the sex partners who are thrilled and delighted to see you having an absolute whale of a time will be very glad you did. ♦