My voice makes me sound like I’m an airhead, but I’m not. 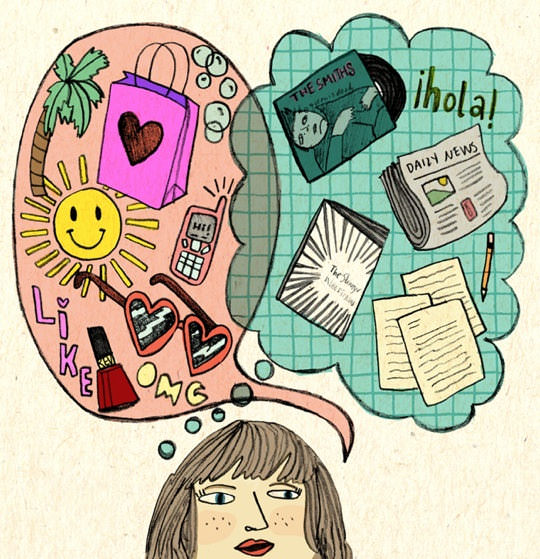 When I was a kid, I never thought twice about my voice. All of my friends sounded just like me—quick, high-pitched, and perpetually bubbly. Anyone who heard us knew where we were from: the San Fernando Valley, a suburban area of Los Angeles made famous in the 1980s by Moon Unit Zappa’s hit song “Valley Girl,” in which she mimicked our rhythms and cadences. See for yourself:

(A modern-day example of “Val-speak” might be the Kardashian sisterhood: they live about 10 minutes away from my childhood home.)

My voice is the calling card I never asked for and that, try as I might, I can’t throw away. Every time I embark on a new enterprise with the vague idea of redefining myself on my own terms (a job, a move, a friend, a date), I expose my Valley-girl roots the moment words begin to tumble out of my mouth, despite my best attempts to—as my high-school drama teacher once commanded me—speak at least five times slower than I perceive myself to be speaking.

The first time I remember feeling defined by my voice was at drama camp, where I yearned to play soulful romantic leads or brassy ball-busters, but was consistently cast as the ditz, the flirt, or anyone with a Southern accent. (According to most playwrights, Southern girls are both flirty and ditzy.)

In middle school I spent hours upon hours writing poetry on LiveJournal, not so much because I liked poetry, but because I loved constructing my identity solely through sans-serif fonts and an excessive use of enjambment. I made friends through the site, cool girls that I won over with thrift store finds and references to the Smiths. “Your voice doesn’t sound anything like I thought it would” was always the first thing they said when we talked on the phone. I worried: were they disappointed that my voice didn’t match my sophisticated online persona?

When I went away to college up north, at UC Berkeley, I worked hard to drop the “likes” from my vernacular and stop raising my voice at the end of every sentence, making each statement of fact into a question. It was easier to do this once I’d left the Valley, because I wasn’t around as many girls who sounded like extras from Clueless.

But I could never shake the speedy tempo or the ebullient patter. I started feeling judged and it hurt. Some memories:

—My freshman year of college, my boyfriend’s ex-girlfriend and her friends made up a code name for me so they could write mean Facebook comments about us. (Nice, right?) My pseudonym was “mouse.” Squeak squeak.

—A creative-writing professor told me, in front of the entire class, that my writing reminded him of Henry James, but that he never had any idea what I was saying when I raised my hand during discussion period. I barely registered the compliment.

—This anecdote really makes me cringe, but once, a guy asked me if I was on cocaine because I was talking so quickly on our first date. I sounded “speedy,” he said.

—When I studied abroad in Buenos Aires my junior year, I was excited to put my six years of honors Spanish to use. But my friends in my program made fun of my inability to roll my Rs, and one too many Argentine told me I sounded “like the kids on The O.C.” so—and I still regret this—I stopped speaking Spanish except when necessary.

—A comment I heard dozens and dozens of times: “It wasn’t until I started listening to what you were saying that I realized you were smart, HA HA HA.”

As a result, I started to feel—and honestly, often still feel—that I constantly have to prove that my voice is not representative of the person I really am.

(Before I continue: You’re probably dying to know what I sound like, right? I had all but given up trying to think of an accurate celebrity analogy until I remembered: Lizzie McGuire. Not Hilary Duff, who played her, but Lizzie. This is an acceptable way for a 13-year-old girl to talk, but I am a 24-year-old woman.)

Since people tend to infer that I’m a ditz when they meet me, I constantly stress about presenting the more “intellectual” side of myself. But lately I’ve been wondering if the issue is larger than my uncontainable inner Lizzie. What does it really mean to “talk like a girl”?

In a recent Jezebel piece titled “Are Women’s High-Pitched Ladyvoices Holding Them Back?” Erin Gloria Ryan wrote, “Research shows that people prefer listening to instructions from deep, rich baritones over nags from high tittering trills.” I was disappointed when, instead of bemoaning the survey and its results, commenters made fun of squeaky voices or self-consciously wondered if they had “ladyvoices,” too.

Admittedly, it’s hard not to think in stereotypes when it comes to female voices. I’ve joked that I symbolize the worst parts of both the Manic Pixie Dream Girl and the Fast-Talking Dame. I’m a tad manic, but not mysterious enough to be a Pixie, which I wouldn’t want to be anyway; and I’m snappy, but not sultry enough to embody the Dames I respect.

But we ladies really don’t have that many choices when it comes to how we should speak! There’s breathy, little-girl Marilyn. Heavily accented, over-the-top sultry, like Sofia Vergara on Modern Family. So many pejorative terms: screechy, shrill, whiny. And think: when do people criticize male voices? Not as often, but sometimes if they’re not “manly” enough—then they’re fey, lisping, or adenoidal. Hey, wait! We belittle women for having “girly” voices…but we belittle men for having “girly” voices, too?

Maybe the problem is not so much a girl’s voice, but the fact that she is a girl.

Feminist notions aside, I still can’t help feeling sometimes like it’s just not cool to have an effervescent voice if you want to be a serious person, a sexy person, or an important person. But then I realize that, despite my insecurities, I’ve never really lost out on any opportunities because of the way I speak. I’ve written front-page newspaper stories, won scholarships, and developed close relationships with professors and bosses. I have amazing friends, and guys somehow still like me, even though I talk a mile per minute. There are also some benefits to coming across as “ditzy”: I’m a great interviewer, because people feel comfortable telling me their secrets. I’m nonjudgmental, because I know from experience how much it hurts to be characterized as a “ditz” or “bitch” or “slut” based on a first impression.

For most of my life, I thought my voice highlighted the qualities I dislike about myself: my Valley-girl past, my impetuousness, my impatience, my inability to chill out. But my voice also reflects my best traits: I think very quickly, I’m energetic, and I’m adventurous. I’m empathetic, a communicator, and constantly engaged. These are qualities that I know the people in my life appreciate, the qualities that, as corny as it sounds, make me who I am.

So I’m working on it. Just don’t ask me to read this out loud. ♦

Katie J.M. Baker is a writer living in New York. You can learn more about her here.