How to Run a Movie Marathon

Don’t let anyone tell you this isn’t a perfectly legitimate use of your time. 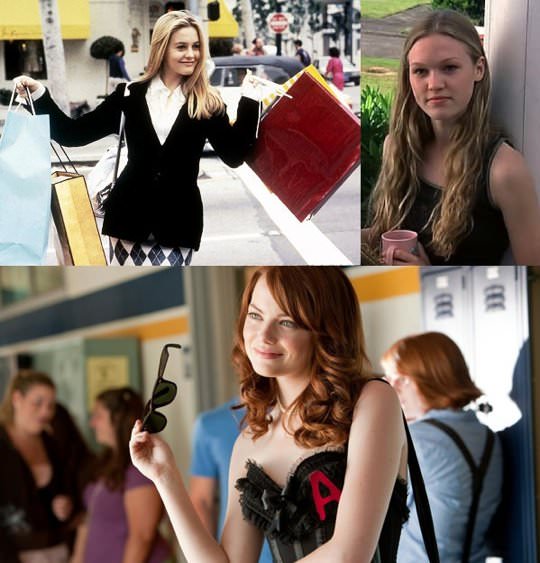 For your Loose Interpretation of Classic Books night. Clockwise from top left: Clueless, 10 Things I Hate About You, Easy A.

Let’s be honest, the movie marathon is primarily a means to be lazy and zone out for hours on end. But to justify getting sucked into the Sunday vortex that is ABC Family’s Harry Potter Weekend, I could also make the argument that it’s a legitimate way to study various art forms all at once: cinematography, set design, music, writing, acting, costume design, makeup, special effects, puppetry, and so on. Either way, they’re fun and if you want to throw one, you have to pick a theme—as generic or as specific as you please. It can be as vague as “romantic comedies” or as explicit as Films That Feature a Villain Who Wears Shoulder Pads. Here are some pointers to help you curate:

Stick to a Series

The easiest way to throw a movie marathon is to pick a series and commit to it: Star Wars, Lord of the Rings, Back to the Future, and, yes, The Twilight Saga will provide you with hours of escapism before you fall asleep with visions of Hobbits and vampires dancing in your head. Should you prefer nightmares to dreams, any number of horror franchises, like Friday the 13th and Scream, will do as well. (Should you desire hilarious dreams, watch a Twilight marathon followed by a Friday the 13th marathon and fall asleep to the vision of Jason Voorhees casually showing up to a game of vampire baseball, causing Bella to fall in love with him while Edward yells, “Oh, come on! He doesn’t even drive a Volvo!”)

Asking each of your friends to pick a movie for a sleepover can lead to a mix of genres. It also gives you and your friends an opportunity to share something you really love and to (hopefully) find new favorites in the process. As a backup, keep a copy of something all of you like on hand, just in case you hate one another’s picks and would rather watch Mean Girls for the 920th time instead.

Make your English teacher proud and spend the night watching modern-day adaptations of classic literature, like Clueless (Emma), 10 Things I Hate About You (The Taming of the Shrew), and Easy A (The Scarlet Letter). Should you want to watch a certain pair of star-crossed lovers have their story told in various ways, try William Shakespeare’s Romeo & Juliet, West Side Story, and&#8212mostly for the glory that is young Nicolas Cage in faux-punk mode&#8212Valley Girl.

The critics were none too kind to Britney Spears’ Crossroads, Christina Aguilera’s Burlesque, Mariah Carey’s Glitter, Madonna’s Who’s That Girl or the Spice Girls’ Spice World, but that makes them perfect for a movie marathon. Over-acting, time-capsule costumes, goofball adventures, and solid soundtracks are what dumb/fun movie nights are made of.

Pick a number of films by the same director or starring the same actor and watch their whole body of work. For example, you may want to watch every movie starring Ryan Gosling or directed by Mira Nair. You could also load up on Johnny Depp Films Not Directed by Tim Burton (likewise, Tim Burton Films Not Starring Johnny Depp).

There are no rules here! If you can find order amidst cinematic chaos, go for it. Off the top of my head, I can think of: Mistaken Identity Movies, Movies That Involve Makeovers, Musicals, Movies Where Everything Is Solved by Dance, Movies Where People Should Double-Check to Make Sure the Killer Is Dead, Vacation Movies, Roller Skating Movies, Dated-Slang Movies, Creepy Inbred Movies, Movies Where Everything Happens at One Big Party, Movies About Talking Animals, Underdog Movies, St. Bernard Movies—when is someone going to write a movie about a St. Bernard with decent manners?!—and on and on and on.

The Marathon of Obligation

Dun dun dunnnnnnnn. You know all of those movies you have in your Netflix queue that you swear you’re going to watch someday not because you want to, but because you feel like you have to, either because everyone else is talking about them, or because they’re IMPORTANT? The time has come to start clearing that queue, my friend. If you get so bored that you fall asleep during the first movie, at least you tried! And if you make it through, you will feel a sense of accomplishment that I imagine is somewhat similar to finishing an actual marathon. Congratulations! You can now move on with your life and rewatch the last two seasons of Parks and Recreation just like you wanted to do all along.

Obviously, the entire endeavor is designed for a good time (well, save for the obligatory Netflix thing). If you find yourself slowly Golluming out on the couch, forgetting the taste of bread and the sound of trees or whatever as you drool into a half-eaten bag of kettle corn and wonder where the last few hours of your life went, it is probably best to go outside. Or at least go on the internet and brag to everyone that you just watched six straight hours of silent films with no ill effects aside from really needing to talk. ♦