The second installment in a short series about girls’ relationships to drugs and alcohol. 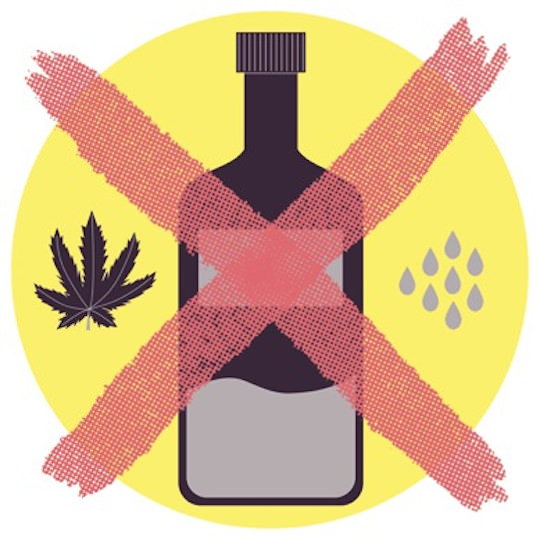 It was ninth grade. The moment had come. It was the kind of thing huddled girlfriends talked about in middle school at sleepovers, but no one had actually done, at least in my school. We were in the backyard, in a tent. It was my best friend’s birthday party, but I wasn’t exactly friends with the other people there: the infamous “popular girls.” Partially filled water bottles went around the circle, suffusing the tent with sickly sweet smells. I was handed a pink Nalgene half-full with clear liquid. Everyone turned to me, waiting. That was the first time I decided to drink.

The second time was in tenth grade, on our way to a homecoming afterparty, inside a limo. I was with a large group of my friends, and a few boys I didn’t know. A couple of my friends wanted to indulge in some drinks on the ride, and being infatuated with one of them at the time, I did not hesitate when offered, even though I could feel the glare of my other friends, the ones who disapproved of all of this illicit behavior. I can’t remember how much I drank, and I didn’t exactly know what being drunk was supposed to feel like, so when I was accused of being such, I denied it. I still don’t even know if I was. I was confused; the fun of being bad was fading quickly, and the searing guilt sparked by the looks and comments of my abstaining friends contributed to the acidic churning in my stomach. In other words, I felt like an asshole. I felt like I had done something very, very wrong.

That moment was the end of my alcohol usage, and I’m proud to say I’ve never actually accepted any drug offers at this point. Why I don’t use drugs and alcohol is a very personal decision. I can’t say it’s because of the videos from health class, my mother’s lectures, or a religious deal. It doesn’t even come chiefly from those two previous experiences. I suppose my philosophy toward using is that I don’t understand why some people believe they need such things to have fun. Yes, I know, “o reason not the need” (in the words of King Lear) (yes from Shakespeare) (deal with it), and I’m not trying to make a Puritan argument, but why would you need to change yourself, change how you think and how you act, change the way your senses work, change even the way your brain works—why would you need to make alterations to your personality, your own self, to have a nice night?

But: I know that teenagerdom is a time when the idea of changing your personality can be really appealing. I know that a lot of us (myself included) are searching around for an identity, something that will give us confidence and make us feel like “ourselves” (because most of us don’t know what our “selves” are, and we are changing day to day and minute to minute), and that “stoner” or “party girl” or whatever can seem like a really easy identity to grab hold of and just be, for a while. I get that. But my own sense of identity and self-respect comes, in large part, from sticking to my morals, which include being sober.

I also understand that the sensation of using the common stuff—booze, weed—is something completely different from the regular world, and that that’s the primary source of its appeal, but when someone I really care about gets numb to those sensations and wants to move on to something bigger, something worse, I try to talk them out of it. My arguments are pretty generic; I simply remind them of the health issues or the potential punishments they could receive if something were to go wrong, but sometimes—usually, in fact—that person doesn’t let me in. And I don’t blame them—we’ve all been hearing those arguments since we were in seventh grade, so their effect is gone.

Let me make this clear: I don’t shun people who smoke or drink—several of my good friends smoke together, but that doesn’t stop me from worrying about them. I know the immediate effects of weed aren’t very taxing on a person, and you can’t exactly become addicted to it—but I really do fear that it can be a gateway drug, and excessive use of hard drugs and alcohol can change a person. Not that change is always bad, or that it isn’t inevitable—but I get a little uncomfortable seeing someone I used to hang out with telling stories of their Friday-night run-ins with cops, carrying handles through the park, or smoking in their bedroom. I don’t want anyone getting in trouble.

I’m aware that I sound a little hypocritical right now—on one hand I don’t want to judge people who use substances; on the other I’m all worried about their “long-term damage” and “negative consequences.” But I do genuinely feel both of those somewhat contradictory things at the same time. I don’t support my friends’ using, but I still love them all and enjoy hanging out with them…when they’re sober. Being around drunk/high people when you’re not that way is a little awkward. It’s like hearing someone tell a hilarious inside joke that you’re not part of. All of my friends understand my stance on all this, and if someone doesn’t accept my not wanting them high around me, they’re not worth my time.

I live in a well-off suburban community outside Chicago, where drugs are readily available. Navigating through this kind of town as a straightedge isn’t as hard as you might think. I’d say a majority of the 800 students in my grade have used alcohol or drugs at least once, me being one of them. The percentage of consistent users hovers around 30, which includes a portion of my close friends. During my underclassman years I did feel a lot of pressure, which led to the tent incident, but as time passed, my need to participate subsided. Freshman year, everything was sloppy, full of raiding parents’ cabinets, and power was handed to those willing to do so. From junior year on, it was barely discussed. It wasn’t something you needed to prove anymore, just something you could do if you wanted.

Staying sober does make me feel somewhat accomplished—it’s not a big shiny medal of willpower, just a small pleasant feeling I can tap into when necessary. I don’t view myself as better than people who aren’t sober, but breaking through my generic teenage self-conscious shell and going against the general trend of high school social behavior was a tiny personal victory. Abstaining keeps me out of trouble—not just with the police or my authoritarian parents, but also with my friends, and even myself. Sure, I’m left out of the occasional fun-weekend story, and I’m not on the Facebook smoke-ring album, and no that concert wasn’t actually that good, but when I weigh all that out in my head, I feel all right about it.

I’m not planning on abstaining from alcohol for the rest of my life. Hopefully I’ll skip out on the usual college spree, and take things in at a pace, and at a level, that’s comfortable for me. What that level will be, I’m not quite sure yet. My parents don’t handle alcohol well, and I predict I’ll be the same way. But in my fantasy, I would be one of those chill young adults who nonchalantly carry around a bottle of beer at a party or baseball game—this may be totally unrealistic, but I’ll find out in good time. As far as drugs go, I’ve considered trying weed before, but I never found my reasons good enough other than just for the sake of trying it; at the rate I’m going, the chances that I ever will are slim.

I worry my current resolve will crack upon entering college, and that if it does I will lose part of myself in the process—that some big part of me will dissipate, and I’ll come out as some new person. But I also know that everyone changes when they leave high school, and I will too, and if it happens without drugs and alcohol, I’ll have something more to be proud of. I like feeling in control of myself. Right now I do that by staying sober. If I can retain that feeling while using alcohol or drugs someday, that’ll be OK, too. That’s how I’ll know what I’m doing is right for me. ♦

Emily D. is a senior in high school fervently awaiting replies from the colleges she applied to. When not drooling at the mail slot, she spends time either trying to communicate with her dog in a language they created, belting songs from the musical Cats, or daydreaming that Jack White is her brother.