Ladies of the Night

During the day, you keep your meals relatively healthy and at least attempt to incorporate most of the major food groups. But in the dead of night, when your stomach is grumbling, you’re a little less discriminating. Sometimes, a lot less discriminating. Here’s a list of foods that you may find yourself gravitating toward when you need to satisfy that late-night hunger, and some advice on how to make the most of your nocturnal noshing. 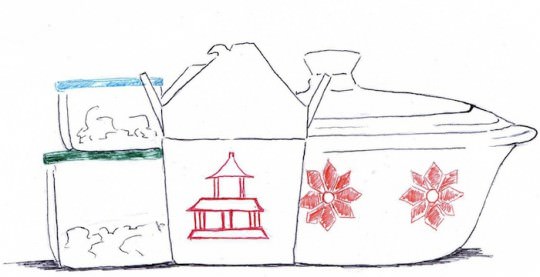 We should be thankful that, even in a recession, we Americans have the kind of financial situation where leftovers are even a possibility. Nevertheless, there is something inherently unappealing about all of the plastic, airtight containers and Saran-wrapped casserole dishes that always seem to be occupying the refrigerator. In the daylight hours, you’d be hard-pressed to find anything less enticing, but come nighttime that amorphous blob of peas, carrots, and mashed potatoes, that greenish roast, that week-old Chinese take-out, all call to you. Suddenly, they’re no longer leftovers, they’re a “super yummy remnant,” and all your misgivings melt away. In fact, you become so convinced of the integrity of this food that you don’t even warm it up.

Tips and Tricks: If you don’t know exactly how long the food has been in the refrigerator, stay away from it. Food poisoning is a very real thing. 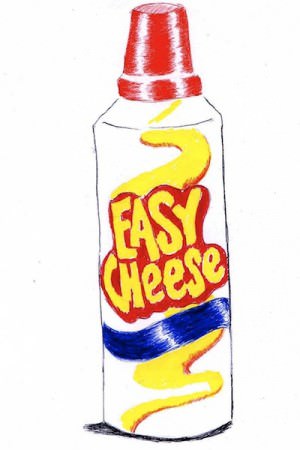 By day, upper-class sophisticates may spread their Cheddar ’n Bacon–flavored Easy Cheese on crackers, but after dark it’s safe to assume that even they are tossing etiquette aside and squeezing that golden, processed goodness directly into their mouths. Easy Cheese is the ideal snack—it doesn’t require any preparation, it tastes enough like actual cheese to satisfy your late-night lactose longings, and because of its pasty form, you really don’t even need to chew it. Some people look at this canister o’ cheese and see it as evidence of the dumbing down of society—they call it the epitome of low culture and the harbinger of end times. They might have a point, but you can use Easy Cheese to draw little happy faces on other foods, walls, or sleeping family members, and that’s kind of cool, no?

Tips and Tricks: Squeeze a bit of Easy Cheese onto your cold leftovers. 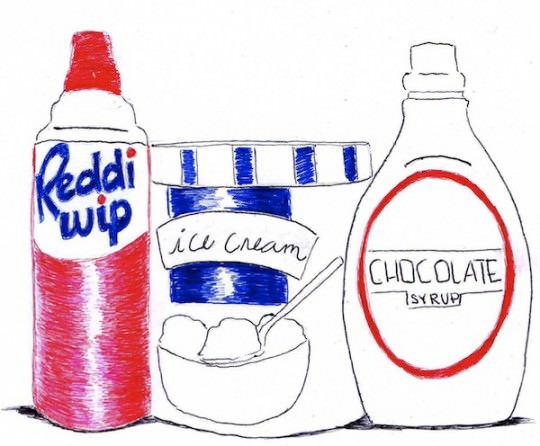 The beauty of the bowl-less sundae is that there’s minimal cleanup. You also get all the flavor of a sundae without having to make an actual sundae. But beware, this isn’t for amateur midnight snackers. In order to pull the bowl-less sundae off successfully, you’re going to need a really solid understanding of your gag reflex and a good sense of the radius of your mouth.

Tips and Tricks: The bowl-less sundae is the perfect sleepover snack both because it’s fun to eat and also because, if things go awry and you start to choke, you’ll have someone to perform the Heimlich Maneuver on you. 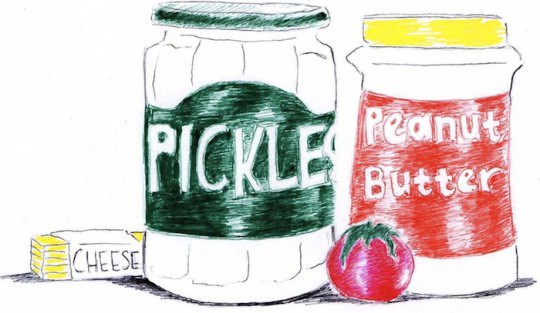 It’s one or two in the morning, everything is kind of hazy, you’re hungry, you kind of want a sandwich, but you definitely don’t have the energy to fiddle around with that tiny wire twist tie on the bread bag or even to walk over to wherever the bread is kept. Sandwich fillings—that is, the ingredients that usually make up the business part of a sandwich—might be exactly what you need. Lunchmeat, tomatoes, Kraft cheese singles, pickles, peanut butter straight from the jar—any of these are suitable after-hours treats. Yes, that’s right, sandwich fillings can be quite filling. (You get it? Because they’re fillings, like, they’re inside of something, and then they’re also filling because if you eat them you won’t be hungry anymore because they’re filling and they’re filling.) 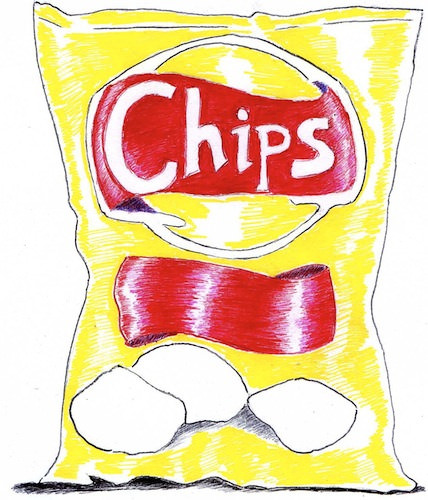 Chips (or crisps, as they’re called in some parts of the world) are the classic late-night snack, and because there have been so many great innovations in chip production, they now come in a variety of sizes, textures, and, most important, flavors. They can taste like tacos, hamburgers, hot dogs, BBQ ribs, and chicken tikka masala. There is a chip to satisfy your every craving, and that’s just beautiful. The well-known drawback is that it’s almost impossible to eat only one of these savory treats. Even if you don’t have a problem with that, you should remember that people can be very territorial about their munchies and if you weren’t the one who purchased the wasabi-flavored chips, you may have to deal with an angry family member or housemate in the morning. It’s always important to weigh how hungry you are against the inevitable repercussions of eating the entire bag of chips. Because you will eat the entire bag of chips.

Tips and Tricks: If you do have the energy to make a sandwich, add a layer of potato chips on top of your cold cuts. You won’t regret it. 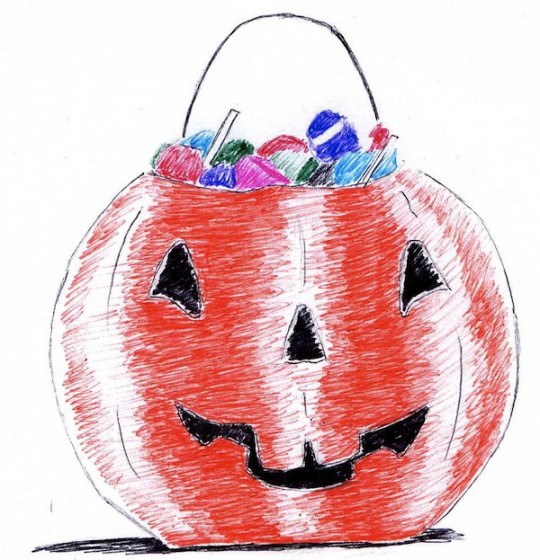 Even if you stopped trick-or-treating years ago, you probably have a sack or a ceramic dish filled with Halloween candy somewhere in your home. Maybe you just couldn’t pass up all of the fun-size Snickers and M&M’s that the supermarkets start peddling at the end of October, or maybe you didn’t get too many trick-or-treaters on Halloween. Either way, it’s January, February, or possibly even March, and you still have all of this candy. While some people might advocate throwing it out, you’re no fool; those Tootsie Pops, Nerds, Smartees, and Now and Laters can be a godsend at midnight.

Tips and Tricks: As every Halloween candy hoarder worth her Jolly Ranchers knows, it’s important to stay away from chocolates that are several months old, because they taste weird.

If you know that there are cookies in your home, you’re going to be thinking about them before you go to sleep, while you’re dreaming, and then of course when you wake up in the middle of the night for a snack. If you’re simply rummaging through cabinets with no specific craving and you happen upon a bunch of cookies, it can feel like you’ve hit the mother lode. When it comes to late-night snacks, cookies are the bee’s knees, the cat’s pajamas, the dog’s bollocks. Chocolate chip, oatmeal, Oreos, gluten-free, they’re all wonderful. At nighttime, even those kind of hard, questionable ones that are packaged in a tin—your grandmother probably has some at her house—taste all right.

Tips and Tricks: Packaged chocolate chip cookies aren’t the greatest, but if you put them in the microwave for a few seconds, they’re slightly better. 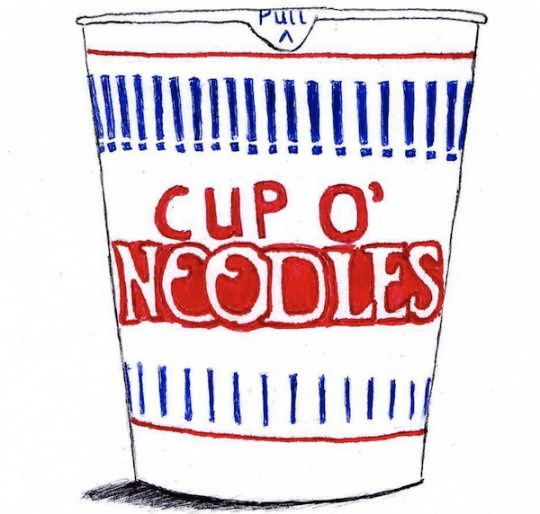 When you need something more substantial, you’re going to want to go the ramen noodle route. The preparation time is longer than it is with most midnight munchies, but there’s a big payoff—not only do the noodles taste delicious, but you’ll feel the sense of accomplishment that comes with cooking your own food. Ramen is also perfect if you want to carbo-load before an all-night marathon study session.

Tips and Tricks: After you’ve finished the noodles, you can drink the noodle-flavored water that’s left in your cup or bowl. So you basically have two meals in one. ♦