This week we’ve run articles on doing lots of drugs and abstaining from everything. Here’s one about choosing the middle path. 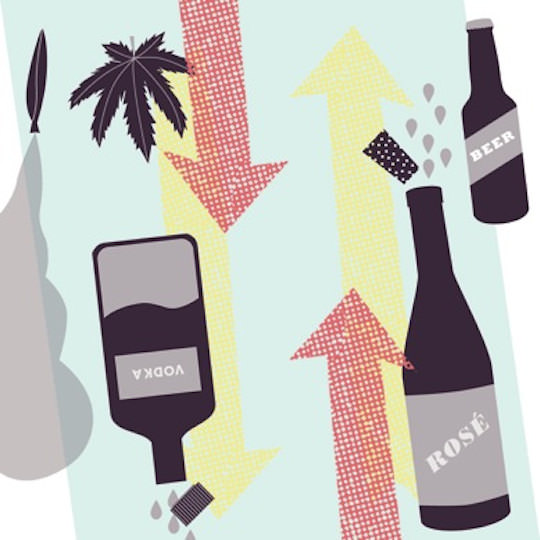 I’ve always been a quitter. There are very few things that I can say I’ve stuck with for more than a few years—my brain just seems to get bored after a little while. Smoking pot was the same way. I started smoking occasionally with my friends during my sophomore year of high school. For us, it was easier to get weed than alcohol, and since we weren’t really going to any parties, smoking just seemed to make more sense. We would use a little bowl or a crushed soda can (TERRIBLE idea, I have no idea what we were inhaling) to smoke bad, cheap weed in somebody’s basement or the park. Was it fun? Sort of—we’d laugh like crazy about random things and eat tons of food, which is pretty much what we would do even if we weren’t high. The next day, I’d go home bloated and tired, feeling like my mind was working just a bit slower than usual.

Around junior year, I began drinking more than smoking, preferring the way that alcohol turned me into a more outgoing and confident version of myself. I was under pretty strict parental supervision, but still managed to do a couple of ridiculous, irresponsible things. I went home with a complete stranger (and let him drive my parents’ car), I passed out in a friend’s bathtub, and I drank until I puked. More than once. Looking back on this time period only three years later, I hear the old woman in my head go, “What the hell were you thinking?” I don’t have too many regrets about the things that I’ve done, but it doesn’t take much thinking to realize that my actions were incredibly risky. My friends at the time were, quite reasonably, pretty concerned with what I was doing. Luckily for me, this period lasted only six months or so until I made some older friends and learned the value of drinking in moderation. Who knew that other people actually drank while playing games or dancing, rather than simply for the goal of being shitfaced? It was a valuable lesson that kept me (mostly) out of trouble for the rest of my high school career.

You’ve read a couple of articles this week about the extremes of the substance-use spectrum: people who’ve done lots of different drugs or who abstain from everything. I’m here to present a different path—a middle path, if you will. I drink, but not in excess. I go out for drinks on weekends with friends. That’s all I do. I’ve never even tried anything harder than liquor and weed, and I have no desire to. Marijuana was never a “gateway drug” for me. In fact it’s lost all of its appeal for me.

The ironic part is that I’m in college now, in New York City, and I have never had such easy access to good-quality weed, and so many people offering it to me for free. My closest friends all smoke cigarettes and pot, and constantly ask me—or rather, jokingly plead with me—to join them. I never do, mostly because it’s been over a year now and I’d like to keep the streak going, but also because there’s just so much more stuff to DO here in New York. Not only night things, like clubs or bars or parties, but tons of museums, concerts, themed parties, and so on to the point where I actually feel like I’m wasting my time by not being busy exploring the city 24/7. And yes, I’m sure there are plenty of people who do all of those things while high, but when my friends smoke pot it usually leads to them spending the night in bed ordering a delivery of 20 cookies for three people (happened), or passing out and being taped to their own bed (also true). I love my friends dearly, but if I have to be completely honest I love them a lot more when they aren’t high.

Last spring, I started getting horrible side effects after drinking even small quantities of hard alcohol—horrific stomach cramps combined with the other lovely side effects that one would typically associate with food poisoning. (I don’t think I need to get into details here.) I’m still not sure if this was caused by having one too many shots of cheap vodka, or my body was simply rebelling against me, but I eventually made the connection and switched to drinking only wine and beer. I also started drinking a bit less, partly out of stinginess (drinks can cost $10-$16 each in NYC) and partly because I realized how annoying it can be for other, more sober people to have to take care of you when they just want to enjoy their night out. But I never saw a reason to stop drinking altogether.

My recent stint of near-sobriety (in comparison to my past, at least) has taught me a couple things. One is that many people will not stop asking you to smoke or drink with them, even if you tell them that it will make you disgustingly sick. I’ve had to give graphic descriptions of vomiting while on the toilet in order to convince people that I really don’t want to take a shot of Smirnoff with them, thanks. For those who don’t want to imbibe, I’ve found “I’m allergic to hard liquor” and “I’m driving tonight” to be the most effective ways to get others off your case. But once you get your point across, people will usually respect you and include you in whatever they are doing, even if you aren’t as wasted as they are. Watching drunk people say and do absurd things can be either truly hilarious or insanely boring depending on your mood. The good news is that this helps you figure out which people you actually enjoy being around. Some people are fun all the time, drunk or otherwise. Some people are not. When you are actually able to observe this with some degree of sobriety, you can make the distinction more quickly.

I still drink because I like to drink. Having a few drinks on a weekend night is fun. It’s sort of the cheap(er) version of having dinner with friends, and the relaxing effects of alcohol make it easier to socialize with new people or go out dancing without feeling awkward. I’ve also reached the point where I sort of enjoy the taste of a good beer or wine. I, like all under-21 college students, have a fake ID, and with easy access to alcohol, drinking has become less of a competitive sport performed at frat parties (or so I hear from my friends at other schools) and more something to go out and do at an interesting restaurant or bar. Drinking is definitely not something I feel 100% compelled to do—when I’m busy with work or with friends who don’t imbibe, I can easily go a month or so without it—but as long as I don’t have to go out of my way for a glass of wine, why not? So, see, I’m not always a quitter.

I feel like this account should be concluded with some kind of moral that I would have wanted to tell my 14-year-old self. Of course things like this always aren’t so clear-cut, but it probably would go something like this:

Drinking and smoking can both be fun. They can also make you lazy or sick, and can cause you to act in ways that you normally wouldn’t. What they can’t do, no matter what anybody says, is make you happier or make your life more interesting. Just keep that in mind for the rest of high school, OK?

P.S. Try not to get caught so much! You’ve clearly got some terrible luck. ♦