This is the first of three installments this week that deal with guest authors’ relationships to drugs and alcohol. 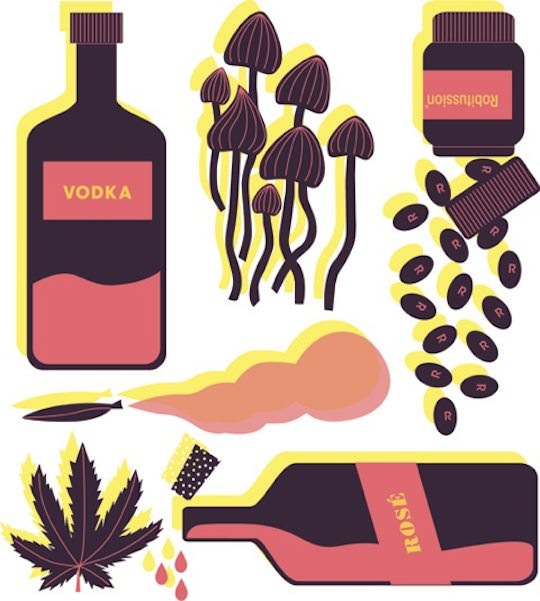 I was 15 when I got drunk for the first time. I went to Hayley Anderson’s* Halloween party dressed up as Beelzebub (we had just finished reading Paradise Lost in English), took probably four sips of Hayley’s parents’ vodka out of a water bottle, and promptly declared myself “schwasty,” at which juncture I proceeded to stagger around proclaiming my drunkenness to the world until I found a boy who would hook up with me. We kissed on the dance floor for a little while before he took me by the arm and pulled me outside.

On the swings in Hayley’s backyard, he told me, “I don’t want to make out with you.”

“Oookay…” I said, wondering what in the hell he thought we had been doing for the past 10 minutes.

He took a deep breath. “Do you want to give me head?”

At that point in my life, I pretty much thought a blow job entailed pushing hot air out of the lungs, through my mouth, in the general direction of someone’s penis. While it’s actually a lot more up-close and personal than that, I found the mere notion of putting my face anywhere near this stranger’s crotch deeply disturbing. “No thanks,” I said.

He stood up and brushed off his jeans. “Bye, then,” he said. He turned around and went back into the house. It wasn’t until one of his anonymous goon friends whistled at me as I slid off the swing that I realized the kid hadn’t even been wearing a costume, and that I was dressed up like some kind of Wannabe Devilish Sexual Predator.

You have to understand: At the time, it seemed like I was eons late to the whole make-out scene. (Later on I’d find out that this was just patently untrue, as a good 60 percent of my friends—girls and guys—were still card-carrying lip virgins at that point. On a similar note, most of them had yet to touch a drop of liquor, contrary to my firm and unquestionable belief that everyone was partying like crazy without me. So much of what I did in my teenage years was contingent upon stuff I thought other people were doing that they weren’t actually doing.) I’d had my first kiss only a few months before, and it had been averagely sucky in the way of too-much-braces and not-enough-tongue, but the overall awkwardness of the situation had been considerably augmented by the fact that it had taken place in an old folks’ home. A fellow volunteer and I dutifully set our charges up with a Fred Astaire video and snuck off to go make out in the hallway, which smelled like adult diapers and vitamin smoothies. I guess I should’ve closed my eyes, but something about the DROP SOILED LAUNDRY HERE sign just to the left of my make-out buddy’s head had me mesmerized. The whole thing was just too embarrassing to handle, and so it didn’t really count.

So as much as I knew that I ought to be offended by this thing that had happened at Hayley’s party, I actually felt…validated. This was how it was supposed to go down–fueled by alcohol on a sweaty dance floor, not out of boredom in the back hallway of the dementia ward at 10 o’clock in the morning. For a long time I had tried so hard to have a normal, functional teenage existence—to get on the map as somebody who goes to parties and gets attention from boys and knows how to have a good time. And it turned out that the whole time the key was right in front of me, in a bottle, 80 proof.

But people don’t just jump from zero to 60 with this stuff; gradually, concessions are made, standards eroded, expectations allowed to shift. A lot of the time, you enter high school as innocent and sweet-smelling as a baby’s bottom and you tell yourself, I’ll go to their parties, but I won’t drink their alcohol. And then something happens—maybe you’re desperate for someone to kiss you, or you get curious to see what all the hubbub is about, or you’re bored and it’s there—and you take those first sips and secretly want to yak but you keep it together and in your head you know something’s changed. So then maybe you say to yourself, All right, I’ll drink their alcohol, but I won’t smoke their weed. But then you make up some kind of bullshit in order to break that promise (really, what’s the difference between an actual high and a contact high? [answer: a heckuva lot]), and from there, it’s only a matter of time before you’re smoking crack daily from your tree house in Mobile, Alabama.

Of course, that whole slippery-slope argument is ridiculous, and anybody who tells you that is probably either a neurotic parent who’s watched a few too many SUPER IMPORTANT REPORTS ABOUT THE CRAZY SHIT YOUR KIDS ARE GETTING UP TO RIGHT THIS MINUTE (jenkem! toad-licking! Smarties-as-gateway-drug!) or on crack themselves. But I think it’s true that a lot of teenagers think they’re invincible, and that their beliefs are set in stone, immovable. Some people’s are, but a lot of people’s aren’t, and I don’t think that’s necessarily a bad thing either—the world is really complicated, value judgments one way or the other are inherently dangerous, and the people who know exactly where they stand on every single issue are more often than not closed-minded morons—but when drugs and alcohol are involved, it becomes surprisingly easy to give relativism a bad name.

I know, because I went a little crazy. The summer before 11th grade, I moved to the East End of Long Island, where it was a lot easier for me to get my grubby little paws on alcohol ET CETERA than it had been in my suburban town back in California. The Hamptons were full of cool, creative, wealthy people who partied all summer and really partied all winter, when there was absolutely nothing else to do. My new school was the kind of place where a kid could be expelled one week for snorting coke in the bathrooms and invited back the next because his parents were, you know, important like that. I’d never experienced such culture shock in my life. It was all well and good to flounce around tipsy and giggling at a Hayley Anderson-type (i.e., very classically high-school-ish) high school party every once in a while, but in New York, the stakes were higher; everybody seemed so much older, and so much more adventurous. And somewhere along the way, I made the decision to become like them.