Ladies of the Night

How to dress like a rebel runaway, glam-rock groupie, party tart, or disco doll. 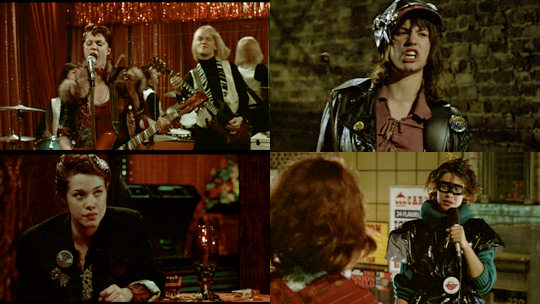 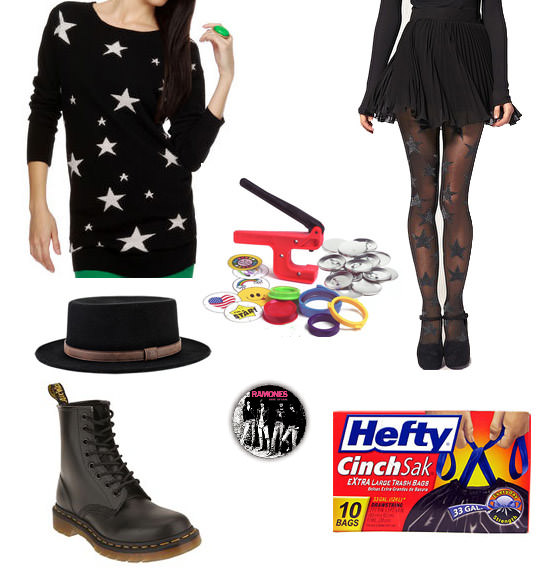 When I first saw the punk-rock classic Times Square (1980), I had the craziest crush on Nicky Marotta, the rebel girl with the voice of a thousand cigarettes. After escaping a psychiatric hospital, Nicky and poor little rich girl Pamela Pearl become the Sleez Sisters, a runaway duo who raise their middle fingers at authority, drop televisions off rooftops, write angsty songs, and befriend a radio DJ named Johnny LaGuardia (played by my other crush TIM CURRY). Nicky is a layering expert, wearing everything from animal-print jumpsuits, the bad girl’s trademark leather jacket, knit tunics over sparkly tights, garbage bags, bank-robber-style eye makeup, and band buttons on everything. I can see Nicky screaming the lyrics to her song “Damn Dog” in this star tunic from Lulu’s ($48); these House of Holland star tights ($27, ASOS), a Cordobes-style hat from Lulu’s ($46); and Doc Martens from Urban Outfitters ($115). DIY your own Times Square pinbacks with a badge maker ($30, Badge-A-Minit)! Start with a few that say “Damn Dog,” “Rock Hard” (the girls’ favorite Suzi Quatro song), “I ♥ Johnny LaGuardia,” and of course one that says “Sleez Sisters”! 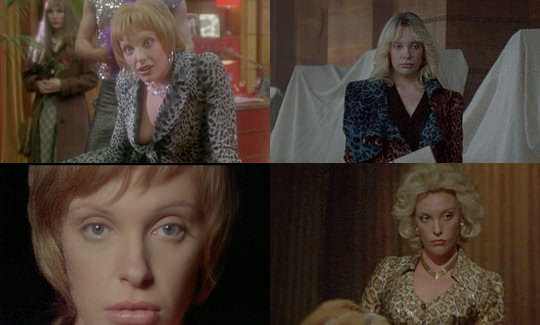 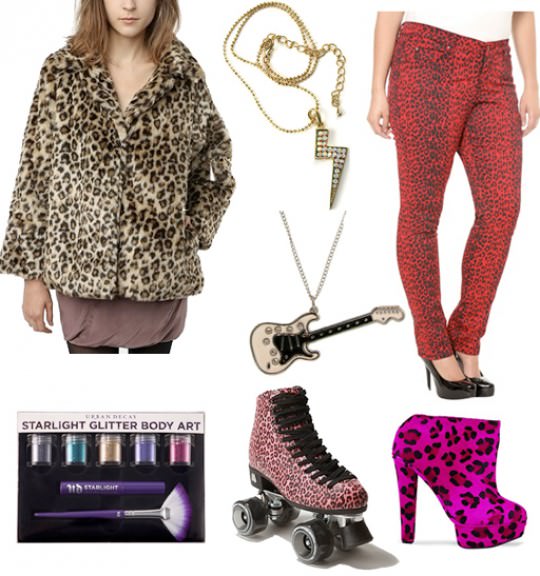 Velvet Goldmine (1998) is about a fictional Ziggy Stardust-like rock star named Brian Slade, and the ’70s British glam-rock scene. Brian Slade’s glittering platforms and cotton-candy hair are pretty amazing, but we have to give props to his wife, Mandy, played by Toni Collette. As the first lady of glam, she goes through just as many looks as her pop-idol husband, but one thing is constant: her love of leopard print! You can’t get any more fancy than a leopard-print coat, like this one by Dolce Vita ($128, Urban Outffiters). Command the dance floor in red leopard-print skinny jeans ($60, Torrid) and Senso’s platform booties ($150, Solestruck). Get these rock ’n’ roll necklaces from Girl Props ($4 and $9) and decorate yourself with some Starlight Glitter Body Art ($35, Urban Decay). And what could be more ’70s than roller skates ($199, Urban Outfitters)? 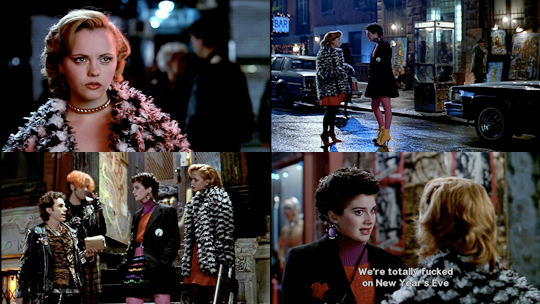 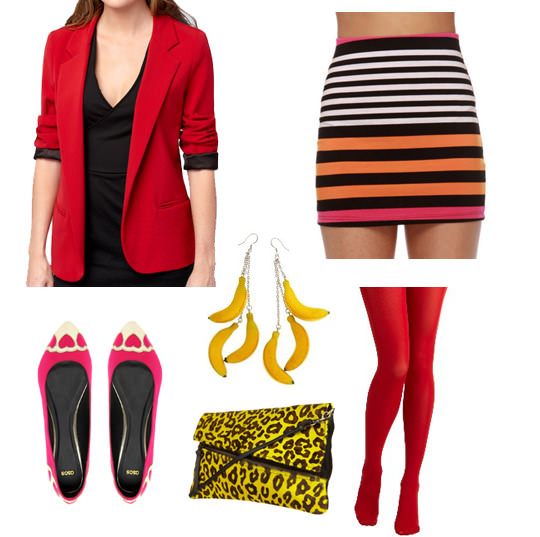 200 Cigarettes (1999) is one of favorite movies ever! Christina Ricci and Gaby Hoffman play Val and Stephie, two teens from Ronkonkoma wandering around New York City looking for Val’s cousin’s New Year’s Eve party. In their bright outfits and high heels, they stir up some trouble with some cute punk rockers. Copy Gaby’s New Wave look with a boyfriend blazer ($68, Fred Flare), a striped skirt ($19, Lulu’s), and red tights ($15, Modcloth). If you’re not feelin’ high heels, get a cute pair of flats like these hot-pink heart ones from ASOS ($45). You’ll need them when you’re running around tryin’ to find the pah-ty! Top it off with some loud accessories like these banana earrings from Girl Props (&9) and this leopard clutch from Topshop ($70). 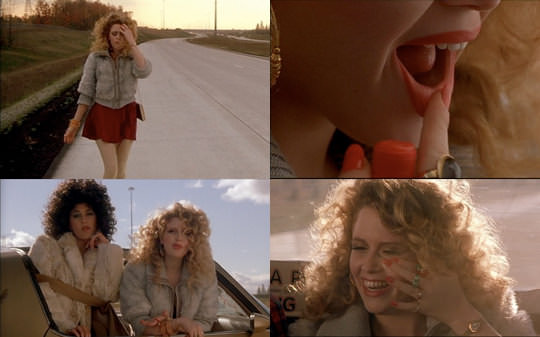 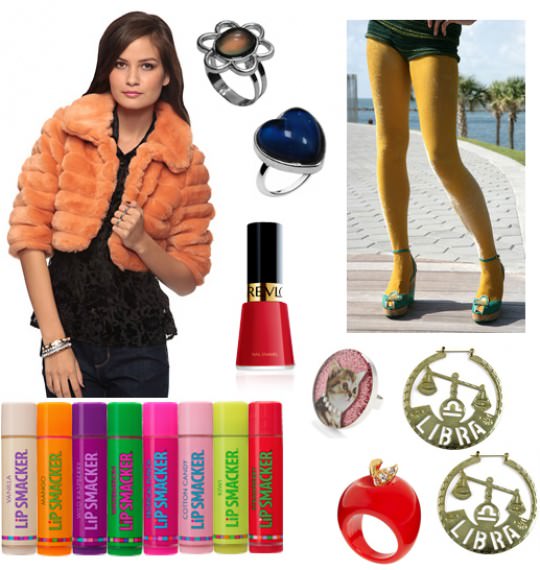 Detroit Rock City (1999) is another one of my all-time favorite flicks! It’s about a group of rock ’n’ roll lovin’ teen dudes who go on a mission to see their favorite band: KISS! On the way to the concert, they meet a laid-back disco chick played by Natasha Lyonne. Her style is PRETTY killer. Get it yourself by wearing TONS of cute jewelz on your fingers—mood rings from Gone Blue ($3), glamour kitty ring ($25) and apple ring ($15) both from Modcloth—and Revlon Red (about $5, drugstores or Revlon.com) on your nails! Keep warm in a furry cropped jacket Forever 21 ($30) and gold glittery tights ($12, We Love Colors). I have some of these zodiac doorknockers ($8, Girl Props) myself, and I think they’d be perfecto for this disco diva. Just don’t forget the Lip Smackers (8 Piece Party Pack, $10, Color and Flavor Shop). 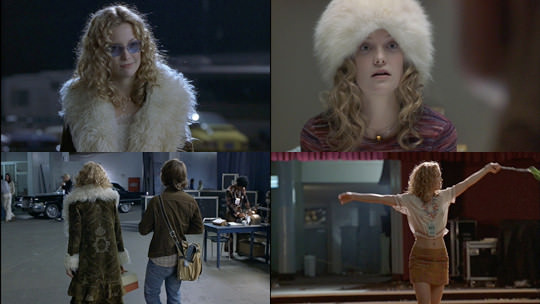 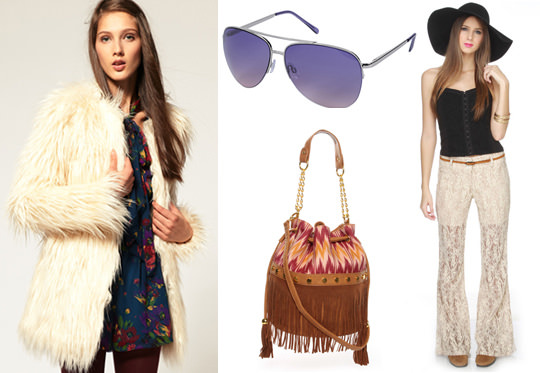 In Almost Famous (2000) Kate Hudson plays the unforgettable Penny Lane, the band Stillwater’s #1 fan. But don’t call her a groupie, she’s a “Band-Aid”! In her long furry coat and purple-tinted sunglasses, she steals the hearts of golden gods and young music journalists alike. Be inspired by her boho-hippie style with this shaggy coat from ASOS ($109), a pair of lace flared pants ($43, Lulu’s), a fringe bag ($41, Lulu’s), and some purple shades ($6, Forever 21). You’ll definitely be the coolest girl on the tour bus. ♦