Literally the Best Thing Ever: Infomercials

A celebration of an unsung goldmine of comedy.

How to Throw a Party When You're Broke 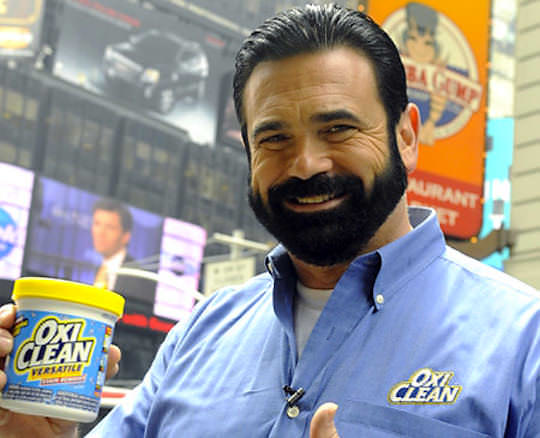 Rest in peace, you beautiful angel.

Infomercials! They’re an insomniac girl’s best pal, perhaps second only to muttering out loud, to herself, “I’ll go to bed after five more minutes of Tumblr.”As anyone with going-to-sleep issues knows, infomercials air during the wee hours when lonesome, wide-awake television watchers are most primed to buy questionable goods from the friendly-looking people on the television screen. Watching them late at night is like staring into an inverse reality where everyone’s smiling and also very excited to find out all the versatile uses for OxiClean instead of sleeping peacefully, as you probably should be.

In addition to being overly cheerful, the hosts of infomercials are usually also hilariously terrifying due to their Silly Putty grins and desperation to unleash upon the late-night consumers of the world what they know are the world’s shoddiest products (or “shoducts,” if you want to use catchy infomercial-ly language). These items usually have super-ambiguous names like the “GT Express,” which is the star of my favorite half-hour distraction from my own wired anxiety (“ang-wiredty?”…no, too far, shut it down). Doesn’t that name sound like it belongs to a fancy car or an electric shaver or something? So masculine! So edgy! With a such a cool title, it’s got to be, like, a hybrid of those things, right? A convertible that also depilates. You have to be wearing sunglasses to even sit/shave inside of it–it’s just that advanced. Well, it’s actually a glorified panini press, people. A panini press shilled by a grandmotherly type named Cathy Mitchell who often is far more grimace-y than gregariously happy—to my delight. She occasionally even seems like she’s on the brink of punching somebody out, and may in fact be tougher-looking than a razor car. She reminds me of the elderly, gruff piano teacher I once had who would smack my hands when I hit the wrong keys.

Less overtly threatening-looking is the fabulous and inimitable Billy Mays, who unfortunately passed away two and a half years ago but will always be the true king of late-night to me (suck it, Letterman). Before he died, he became famous as the spokesperson for a slew of household helpers, from the aforementioned OxiClean to Zorbeez to something called “The Ding King,” hahaha.

Billy Mays has been a true friend to me since I developed insomnia at the age of 13, so naturally I’ve become well acquainted with all of his signature moves. My personal favorite is how he gestures when he really wants to drive a “heartfelt and genuine” point home to viewers about stain-removal or something: hands splayed out towards the viewer, then brought in close to the chest, to the heart, in tight fists. It’s somehow even more effective and convincing than his amazing beard.

Billy Mays was so dedicated to infomercials that not only did he come up with his own style of consumerist choreography, but was also reportedly buried in his signature blue OxiClean shirt. Rest in peace, you beautiful angel. I bet there are no ink stains in heaven.

The most ridiculously amazing all-around infomercial, though, has got to be the one for the Magic Bullet. It’s pretty subversive in the way that it celebrates illicit substances, especially within a genre of television best characterized by its micromanaged nicey-niceness. “How subversive?” you may be asking. Well, does an old lady chain-smoke cigarettes on camera? Oh, yes. Does it have a groaning, still-drunk-from-the-night-before character named “Berman” for whom the hosts make a hangover-helper smoothie? You bet your sweet ass it does. In fact, the whole “plot” of this infomercial is that the effervescent hosts, Mick and Mimi, had a swingin’ party the night before and are now entertaining their guests on the achy morning after.

To me, that beats the hell out of your typical black-and-white “before” montages that ask questions like “Is YOUR food shopping unorganized and stressful???” while the breaking bottom of some frazzled mom’s grocery bag flings produce everywhere…although, let’s face it, I definitely love that aspect of infomercials, too. In fact, I can’t help loving just about every part of this unsung goldmine of comedy.

You know what? You can keep your pleasant dreams and eyes that aren’t ringed like thousand-year-old oak trees, normal sleepers. As for me, I’m going to hang with Cathy, Billy, Mick, and Mimi. The joke will be on you when I’m the one who gets free shipping and an additional instructive DVD because you were busy sleeping. Like a sucker. ♦