Last Night (Being) a DJ Saved My Life

How to play music for a party.

Whatever Gets You Through the Night 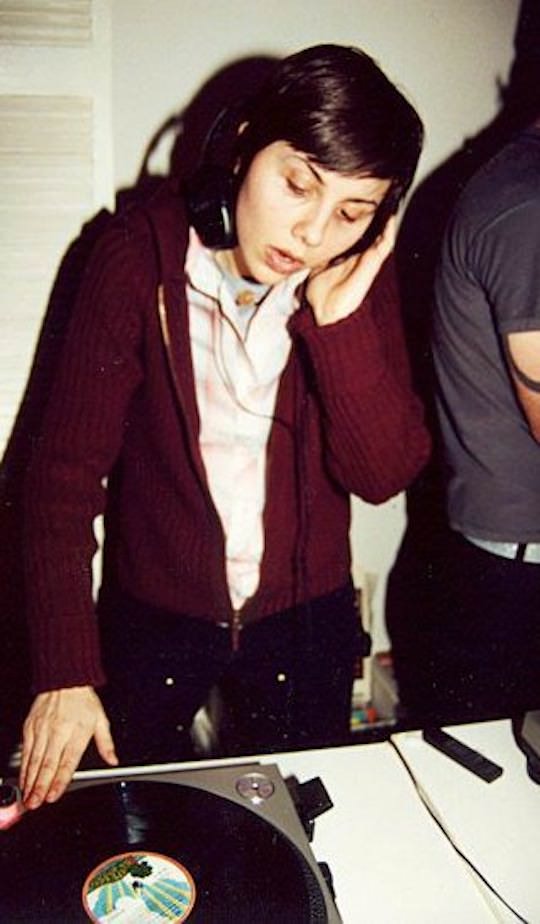 The author as turntablist.

Learning to DJ changed my life. It happened right when I needed an empowering kick in the ass, a reminder of what it was to be young, free, and utterly alive at 2:30 AM.

New Year’s Eve, 2001: I found myself in Houston, Texas, behind two turntables, armed with someone else’s record collection and some half-broken headphones, at the most holy-shit-this-is-bananas party I have ever been to. Like, a broken-windows, people-having-sex-on-the-microwave-stand, unexplained-footprints-on-the-ceiling-the-next-morning type of party. I had gone to Houston, on a whim, bought myself a ticket to someplace warm, far from snowy Chicago—a place where I did not know anyone, where I could get together the courage to break up with a boyfriend who was no good to me, but whom I was nevertheless really toxically attached to. I met some cool kids, who insisted I stay an extra day and come to their party, which they promised would be monumental—50 forties, plus an extra ounce, would be consumed at the stroke of midnight, ringing in the New Year with 2001 ounces of booze. An awesome band was playing. I said “Sure, why not?” and extended my ticket (insert foreshadowing-style music here), not knowing the fortuitous turn my life would take that very night.

I showed up to the party, and was one of two people there who didn’t drink. The DJ/MC who was manning the mic and the music was wearing a fake moustache and an ill-fitting polyester suit and was well on his way to wasted even though maybe 12 people had arrived. He kept trying to breakdance on the floor and would forget to put another song on. The party hosts were concerned and stepped up. “You want to DJ?” they asked. I had no idea, but I said sure, because isn’t the dream for any lifelong music nerd to be in charge of the music? YES, YES IT IS MY TURN, FINALLY.

I had some help from a very nice (and very cute, which never hurts) boy who had some DJing experience until I understood how to work everything. But even this hot assistant became invisible to me as soon as people started dancing, or screaming, “THIS IS MY JAM!” about a particular selection. I was fully hooked by the time the apartment’s floorboards were swaying under us, every single person bouncing to Outkast’s “Bombs Over Baghdad.” I had done well, and I saw the blinking neon lights at the end of the bad-boyfriend tunnel beckoning me out and toward the dance floor of real happiness.

Does this sort of thing sounds like fun to you? Perhaps you aren’t looking to make the club jump-jump, but maybe just have a faultless playlist ready for your next party? Here are some tips and fundamentals I’ve learned over the years, as well as advice I got from professionals, expressly for you, the burgeoning DJ/Rookie reader.

1. Pick your playlist. Nick Catchdubs, a professional DJ who lives in Brooklyn, says, “DJing is really just two things: selection and technique. For now I’ll just focus on selection, because that’s the same whether you’re scratching on a turntable or just putting an iTunes playlist in the right order. And by selection, I don’t mean just picking songs, but picking songs for a crowd. Paying attention to exactly who your audience is, and trying to make them have as much fun as possible. What works for a bunch of teenage skateboarders might not work for a night out with the girls from the office or an art opening or your parents’ birthday. (They count too! Van Morrison is like Waka Flocka for moms and dads.) But of course, there are the rare records that everyone loves and cannot resist dancing to (e.g., Missy Elliott).”

2. Know your music. Whether you are playing CDs, vinyl, or your iPod, really know what you have—there are great songs that are a minute too long and will kill a mood. You need to have emergency backup tunes in cases like that (see point number five). Work on a practice DJ set or test out the playlist at home so you can figure out what works back to back and how to build the excitement, or the mood of the party. Says Nick: “You could have a million tracks at your fingertips, but what good is that if you’re still scrolling randomly for the next track when the first one ends? Think about what you have in your crate (virtual or otherwise) before you get to the party, so you can concentrate on reading the crowd and vibing out.”

3. “You should have about two to three times the amount of music you think you will need,” says DJ Ayres. It’s true. You have to be prepared, in case your selections fail, or it’s just not a B-52’s kind of party, or you play some old funk song and people go nuts and want more. You never know where the night will take you.

4. Don’t be afraid of crowd-pleasers. You are there to please the crowd! As tempting as it is to fill up on whatever this week’s most blogged remixes are, and have all the newest new stuff, DJing is not the time to show off how ahead of the curve your tastes are. Playing obscure stuff is great, as long as you mix it with more-popular stuff and the song suits the room, the party, the action—but you gotta give people songs they feel comfortable with. Once you hook them with songs they love or know the words to, they will trust you and follow you when you put on this.

5. Always pack a secret weapon. There are never-fail tracks, but you need to wield their power carefully—save them for when the energy of the party is starting to flag, or you picked some song that was a real misfire. This is when you break out your Prince, your vintage Michael Jackson, some Rihanna or Daft Punk. DJ Ayres says he defaults to “Crazy in Love.” Personally, I always went with Michael Jackson’s “Don’t Stop ’Til You Get Enough” or Madonna’s “Into the Groove.”

6. Don’t come out of the gate with all the big guns at once. “Don’t play your best songs too early,” says DJ Ayres from the legendary Brooklyn dance party the Rub. “You want to build the energy higher and higher.” You don’t start your set with “Crazy in Love” just to get people dancing, UNLESS you are the 3 AM DJ at an Ibiza foam party, which you aren’t, unless you are David Guetta, in which case, I am surprised you are reading this far into the how-to.

7. Totally changing direction can energize people. “Don’t be afraid to jump around to different genres in your musical selection. Things can get boring fast if you stick to one thing,” says Gregg Gillis, aka Girl Talk. While he is not a DJ, he knows more about keeping a party going than, well, anyone, ever. Suddenly switch to rock, or bust out something fun but weird. “Maybe Peter Bjorn and John’s ‘Young Folks’ if it’s more of an indie-rock-whistling kinda party,” says Nick Catchdubs. “Beware the Boyz,” some M.I.A., or Nitzer Ebb’s “Join in the Chant” also work.

8. Even though you are nervous, don’t drink too much or get loaded—you will think you are doing a better job than you are.

9. Know how to work your equipment, whatever it is. Learn how to hook up a PA, learn how to connect speakers, learn how a mixer works. These are skills that, invariably, even the most unserious party DJ needs to know. Or will be forced to figure out.

10. Don’t DJ too quiet or too loud. No one will dance. If people tell you to turn it up, don’t automatically turn up the volume; turn up the “mid” knob on the mixer about 3/5 of the way—it’ll make the low end of the music thump more and the high end ching more, and it makes people dance because they can feel it, more than just making everything LOUDERRRR.

11. You don’t have to take requests. Seriously, don’t bother. Most requests are for horrible songs. You will be playing Nicki Minaj and someone will ask, “Can you play some hip-hop?” and you will say, “THIS IS HIP-HOP!” and they will say, “But do you have ‘In Da Club’?”

12. Depeche Mode songs are always much slower than you remember them being, and dancehall only works on wasted people, after 1 AM, and only if they have been dancing to party rap for most of the night. Both can kill a floor dead. ♦