How to Run a Movie Marathon 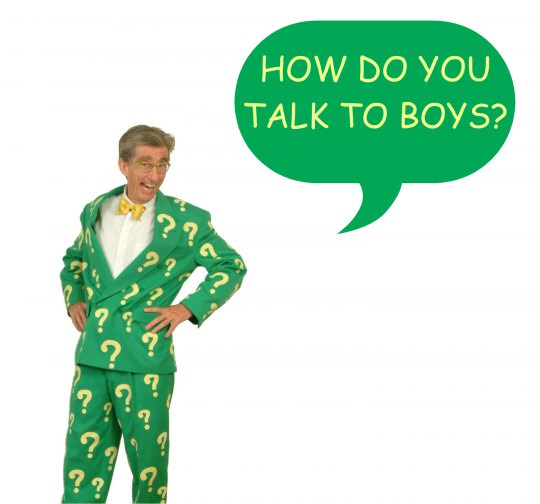 There is a super-cute guy that sits next to me in class. I really want to talk to him, but I’m just so shy. I wish it were as simple as “Hi, you’re cute, let’s talk about stuff and if we like the same things let’s make out.” But it’s not, and I’m at a loss. I’m even scared to Facebook friend him! Where do I start? The semester is almost over, so this needs to happen ASAP. Sincerely, Psyching Out in Psych

Everyone is shy! Everyone is scared to send a Facebook friend request or talk to the guy they like. I hate to break the news to you, but this is like half the fun of having a crush on someone. The before part. You know why you are so head over heels for this guy? It’s not because he’s so great. It’s because someplace deep down inside, you actually want to face your fear. His looks don’t excite you half as much as the superhero lady that lives in the bottom of your stomach and is preparing to soar outta yr mouth the minute you speak to him. He doesn’t excite you as much as the future you want to have with him does. The fantasy! It’s fake. This is why we love it.

So you can stay shy and keep living in the make-believe world where the two of you walk around school with your hands in each other’s butt pockets (something I’ve seen in movies but never in real life). OR you can pop the bubble. Face your fear and see what happens. What if it sucks? What if he hates you? What if you hate him? Nothing. You don’t die. You keep it moving. See Q&A below for more advice on this matter.

In January I asked this guy out. I had liked him for ages, and I got the impression that he liked me too. I spoke to a lot of friends and they all said I should ask him out. So I did, but via Facebook, because I couldn’t pluck up the courage to ask face to face. Anyway, he said no and I was really upset. I still have to see him every week because we are part of the same tennis lessons. I have never had a boyfriend before, and I would like one. I know that might sound a bit desperate, but it’s true. The only problem is that I do not know many boys as I go to an all-girls school, and after what happened in January I have absolutely no confidence with boys whatsoever. Help! Do you have any tips for confidence with boys? —Sophie, Kent, England

God, this is exactly the type of letter I would have once written. I didn’t go to an all-girls school, but I always made the move on guys and they always rejected me. It’s the worst. I still have that rejection pain stored in a little pocket inside my heart.

Ironically, what eventually gave me confidence with boys came from that very same pocket. It was rejection! I was rejected so many times that it became a part of my character. I was able to turn it into a funny joke or a good story—a part of me I learned how to embrace. And then something strange happened: I felt a little more confident. And then a little more. My little snowball of self-love kept getting bigger. And when the ball got really big, I stopped getting rejected. Actually, no, it wasn’t that I didn’t get rejected, it was that the definition of rejection had changed for me. Rejection never goes away.

Today I (try to) see rejection as protection. Protection from feeling bad when things go wrong. Of course I still feel the burn, but I usually end up feeling really grateful for it.

Now that you wanna punch me in the face, here’s what else I have to say: I don’t know what you should do, only because I don’t know how to avoid feeling stupid, weird, insecure, or embarrassed. The only thing that helps us not to feel these icky feelings so strongly is, like I said before, actually having the experience of feeling them. So you see this guy at tennis and you feel weird for a bit. That sucks. Sorry. Welcome to life. And yeah you go to an all-girls school, but when you’re really ready for the boys, there will be boys. This is also called life. Keep on keeping on, show up for tennis despite your fear. Show up for feeling stupid even when it hurts. I think it’s like building up an immunity to just living. It’s hard. It’s painful. Keep going. It gets better.

I’m a 17-year-old girl and I fell badly in love with one of my best friends. He was so sweet with me, but he didn’t want to be my boyfriend. I tried to keep my distance from him, but it’s really hard because I have to see him seven hours a day, every day, at school. For almost six months I tried to have a nice attitude and my feelings about finally disappeared (forever, I thought). But this week I went to his birthday party and he asked me to dance. I said yes to be polite. Then during our dance I started feeling fireworks and butterflies and the love feelings hit me really hard again. Now, like an idiot, I can’t stop thinking about his hand on my back. And he keeps being really nice to me. Maybe he’s just a jerk and is playing with my feelings. What’s your opinion? Sincerely, A Desperate Teenager

Hi, Desperate Teenager. Have you told this friend whom you’re in love with how you feel? If so, then he might be taking advantage of the fact that you love him. He might like that you like him, even if he doesn’t like you back in that way. If he knows how you feel and he’s still flirting, that’s not cool. That’s not what a best friend does. He shouldn’t lead you on.

But we can’t control what he does, only what you can do. I think the lesson here is integrity. Create a boundary. I know it’s hard to do, but if he touches your back in a way that gives you the love-butterflies, move away so that his hand is gone. Why touch? He should respect your space and your body, because this boy is not dumb. He knows it makes you feel good. Maybe he’s having a little power trip? Don’t give away your power.

All of this is just a mindful practice. You don’t have to do it perfectly, but try it. Sure, he can do nice things, but you know in your heart the difference between being nice and being interested in dating you. My roommate is nice. My boyfriend is nicer. Know what I mean?

Believe me when I say this: every time I’ve created my own physical boundary out of a feeling of self-worth, it always makes the guy like me more. But then, guess what? Snooze. I’m already over it, sucka.